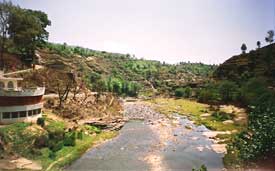 Almora in Uttranchal is facing an acute water crisis, which has been exacerbated by rapid, unplanned urban growth and the mismanagement of vital natural resources that has led to the drying up of natural sources of water. This summer, the Kosi river, one of the major sources of drinking water, may dry up, causing a crisis. What's worse is that while Almora and neighbouring villages are reeling, local hotels and resorts offer spring water in abundance to patrons by buying the land on which springs are located. This makes the crisis worse for local people.

Founded in 1563, Almora traditionally depended upon its naulas and dharas (seepages and natural springs). The area has shallow aquifers that feed its springs. But over the last 150 years the number of springs has declined from 360 to 60. Those that remain are rapidly becoming seasonal with low flows.

The present crisis is mainly the result of irresponsible growth and unplanned development. Rapid population growth, unregulated urbanisation and the intensification of agriculture are mainly responsible for the poor utilisation of water resources. Moreover, with little forest cover, a result of massive deforestation, there is high surface run-off and poor rainwater recharge. This has adversely affected the feeding of mountain springs. The natural rate of groundwater recharge is reckoned to be 31 per cent of the total annual rainfall. "The recharge status of Almora town area is only 2 per cent, however," says J S Rawat, the principal investigator of the Natural Resources Data Management System (nrdms) centre of Kumaon University. 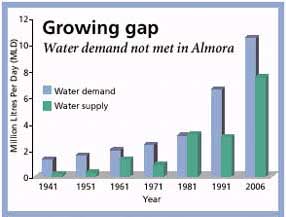 What makes matters worse is that over time the amount of rainfall the region receives has dwindled. Annual rainfall in Almora district has fallen from 1,059 mm more than 50 years ago to 745.2 mm in 2004. This is a little above the cut-off line for drought. The usual seven-day spell of continuous rainfall, called satjhar , during the monsoon does not happen and dry spells have become increasingly common (see graph: Rain, rain gone away). 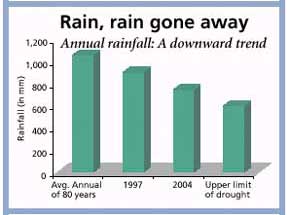 The reduction in rain and the lack of rainwater recharge of natural springs has also adversely affected the flow of river Kosi, which is virtually a trickle during summer. Summer flows in Kosi (May-June) constitute less than 4 per cent of annual flows. A stretch of 7.2 km of Kosi has completely dried up and nearly 13 perennial streams of the river system have become seasonal. The lowest summer flow of this spring-fed river reached an all-time low of 85 litres per second in June 2003, compared to 790 litres per second exactly 12 years ago. This year, the situation is more serious since the flow is expected to fall to 80 litres per second by June 2006. The Kosi could dry up within the next 12 years (see graph: Dying river).


Faced with a desperate situation, the government water department decided to extract groundwater by installing hand pumps along the town's main road in 2005. Most of the pumps were hastily installed and "by the end of the year, two or more of the 20 to 24 hand pumps in the town had gone completely dry", claims Rawat. "All the remaining hand pumps will run dry within the next five to seven years," he adds. Uttaranchal Jal Sansthan, the state's water authority, possesses no monitoring system to study the quantity extracted by the hand pumps. "Since most of the hand pumps are constructed along the road, villages located above and below the area do not get any water supply," says Lalit Pande, director of Uttarakhand Seva Nidhi, an Almora-based ngo.

Matters have come to such a pass largely after the people stopped taking care of the naulas and dharas . The sharing of water rationally by the community and its involvement in making sure that water sources were in good repair and spring water used with caution ended when centralised piped water supply was introduced and local people slowly became dependent on piped water. Little or no attention was paid to storing rainwater.

The town presently gets most of its supply of drinking water from the Shahyi Devi gravitational water supply system and water from the Kosi. The British built the former in 1932 at a cost of Rs 175,000. The scheme harnessed water from seven springs originating in forests located 35 km from Almora. The forest spring-water is collected in two-metre deep tanks and then flows down to a larger storage tank at Kankar Kothi for distribution .