An appeasement for French farmers

French peasants fearing withdrawal of subsidies under the European Community's agricultural policy must be relieved to find the just-concluded GATT did not ask for any radical changes. 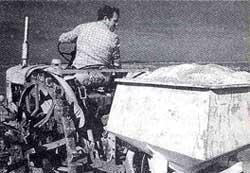 THE AGREEMENT at the conclusion of the Uruguay round of the General Agreement on Tariffs and Trade (GATT) has come as a victory of sorts for French farmers, even if it does not spare them the current low agricultural prices. The agreement, signed on December 15 in Geneva after seven years of negotiations, is compatible with the modified Community Agricultural Policy (CAP) of the European Community (EC), which gave European farmers subsidies on agricultural production and exports and made them prosperous (see box on page 35).

Non-EC countries outside the EC that exported agricultural products, especially USA, the former market leader, found it difficult to compete with European prices and used GATT as a forum to campaign against European subsidies. This led French farmers to protest.

The French farmers were already irked at the changes effected in the CAP, especially the lowering of European prices for agricultural produce. So the French farmers' unions, forgetting their internal differences, had come together to oppose any trade pacts that meant lifting of agricultural subsidies and made GATT the target of their discontent.

Less than two weeks before the GATT agreement, the European farmers won a concession in their trade dealings with the US. On December 3, a 1992 pact between the US and the EC, known as the Blair House I agreement, was altered in favour of the European nations, virtually closing the European market to food imports.

According to Blair House I, European export subsidies were to be reduced by 36 per cent in 10 years and the volume of subsidised exports cut by 21 per cent using the average price in the period 1986-91 as the base. In the new version of the pact, called Blair House II, the base was changed to 1991-92, when the exports were greater.

Blair House I stated that each country must progressively increase its imports from 3 per cent to 5 per cent of internal consumption and all quotas and restrictions must be converted to tariffs, which then must be reduced by 36 per cent in six years. In Blair House II, the imports will cover groups of products such as cereals, meat and dairy products -- not individual products such as wheat, barley and beef. For instance, if the corn imports of a country reach 5 per cent of its consumption of cereals, that country is not obliged to import any other cereal.

Blair House I was accompanied by a peace clause, where Americans and Europeans pledged not to criticise each other's agricultural policies at GATT for a period of six years. This period has been increased to 9 years in the latter version of the pact.

So now, the French farmers should have no reason to complain. Rather, looking at the happenings in the past few years, one would say they should be quite happy with the turn of events.

The CAP was formulated in 1960 with the objective of increasing Europe's agricultural production, which was globally poor at that time. The US, which never seemed to have approved the coming together of European nations in the form of EC, somehow accepted CAP in exchange for a free access for US oil-based products, particularly soya bean, to the European market. In the mid-1980s, however, the dollar became too expensive, making the US lose its market share (See graph: Losing out ). Meanwhile, Europe's agricultural yield rose steadily as a result of subsidies under CAP till it became the main exporter of agricultural products in the world. In fact, in 1984, the growing surplus in dairy products induced the EC to lay down quotas for milk production. But the surplus in other agricultural products continued to grow (See graph: More than enough).

This disconcerted the US and, supported by other exporting countries like Canada, Argentina, Australia and New Zealand, it managed to open in 1986 a new round of global trade negotiations under GATT called the Uruguay round of talks. The Uruguay round for the first time included agriculture in GATT negotiations.

At these negotiations, the US and other nations cornered Europe and asked it to make a choice: either assert itself as an exporter and follow the liberal rules of trade by throwing open its markets or withdraw from the international market if it helps its farmers with subsidies.

Till 1992, Europe still couldn't choose, as it had to reconcile the French and Dutch agro-exporting ambitions, the uncompromising liberalism of the English and the social policy of Portugal and Germany, whose peasants were also numerous. The 12 partner-states in the EC agreed on just one point: CAP was too expensive and most members felt it had become obsolete after the objective of boosting Europe's agricultural production had been achieved.

France was not really enthusiastic about any changes in CAP while Great Britain and Belgium sharply criticised the growth of productions without caring about outlets: in December 1991, surplus stocks (800,000 tonnes of beef, 680,000 tonnes of dairy products or 17 million tonnes of cereals) proved they were right.

The French reluctance was not without cause. Under CAP, its wheat yield had gone up from 2.5 tonnes per ha in 1960 to 6.8 tonnes per ha in 1991. And, out of 60 million tonnes of cereals that France produced in 1991, 27 million tonnes were exported -- 15 million tonnes to other EC nations at European guaranteed prices. The rest was exported outside the EC at international prices, for which the EC had to add a subsidy called restitution to compensate for the difference between low international prices and high European guaranteed prices. In 1991, this subsidy reached 11 billion francs while agricultural sales only reached 6 billion francs.

All the European countries admitted that the CAP could not go on swallowing two-thirds of the EC budget.


The unavoidable reform medicine was bitter. In June 1992, the EC decided to lower European prices -- by 30 per cent for cereals and oil-based products and by 15 per cent for beef -- and compensate for this agriculture income fall with a subsidy related to the area cultivated by the farmer. But, in order to limit surplus agricultural production, the EC also decided that this subsidy would be given only to farmers who left fallow at least 15 per cent of their ploughed lands.

This came as a shock, particularly to cereal producers and, above all, to those who had made big investments in agriculture. The measure was also felt as a failure of FNSEA, a farmers' union representing more than half the French farmers. Another union, the Confederation paysanne, which represents a quarter of the French farmers, deplored the fact that nothing had been done to reduce the large disparity of income between peasants and to address environmental issues. However, FNSEA and Confederation paysanne reluctantly admitted to the necessity of this reform.

The measure was unexpected also because political and union officials had ruled out any debate on changes in CAP for ten years. Moreover, proud of their copious produce, the peasants were more inclined to believe officials who told them that their mission was to feed the planet.

Consequently, a front of refusal, named Coordination rurale, appeared amid the disappointed ones, uniting all political affiliations (from left to right), coming from all over France, and sharing the motto: No to CAP reform. The scapegoats were many: politicians, the EC bureaucrat, the English and GATT.

However, in the face of the Europeans who stood fast and Japan finally opening their country to rice imports, the Americans mellowed. In November 1992, they succeeded in signing the Blair House I agreement with the EC.

French farmers' unions and political officials made a lot of hue and cry over the Blair House agreement, saying it would ruin French agriculture. The French government dramatised the issue, perhaps in an attempt to obtain additional financial compensation from its EC partners. The Coordination rurale, which is a minority group, held several demonstrations against the pact. Nevertheless, it seems this agreement is no worse than the reforms effected in the CAP -- production quotas for dairy products, fall of prices, set-aside programme for fallows.

But were French farmers disposed to hear that? Probably not. Overall, the French farmers chose a wrong debate -- for or against Americans -- and they didn't see that an indispensable further thought needed to be given to their method of production. Increasing production by using more machines, fertilisers, pesticides and genetic research has cost a lot. From 1965 to 1990, Europe lost 11.5 million agricultural workers because of intense mechanisation. With unemployment in Europe approaching 10 per cent, is such mechanisation acceptable? Besides, the large use of synthetic fertilisers and pesticides has created major environmental problems.

Who cares about that today? The organisations for non-chemical agriculture are in a minority and they specialise in fruit and vegetable production and manufactured dairy products.

However, it is clear now that within the EC, any growth of agricultural production in one country must be compensated by a lowering of production in another country. Farmers who thought that good technical results are guarantees of durability now notice that what is important is economic efficiency: producing more on one acre of land is not important -- farmers must now attempt to produce as inexpensively as possible. This requires a complete change in the European farmers' way of thinking. The GATT negotiations didn't create these problems, they just revealed them. What is involved is inordinate intensification that led to surplus, to environmental crisis and budgetary overloading. Unfortunately, French farmers don't dare to discuss any alternatives.