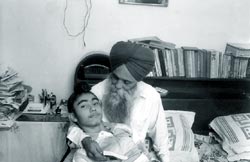 Amarpreet can no longer play football, his favourite sport. In fact, he can hardly move. In 1997, the 14-year-old from Patiala in Punjab was diagnosed with Wilson's Disease -- a genetic disorder in which copper accumulates in the liver, poisons the bloodstream, and damages the kidneys and brain irreversibly.

Today, Amarpreet's father Devinder Singh is a distraught man. Not because his son is wasting away due to the debilitating disease. But because Amarpreet had recuperated almost completely (he had resumed speaking normally, walking and even attending school), only to suffer a relapse. Appallingly, a substandard drug is said to be responsible for this setback. Worse still, Devinder Singh claims that the dubious medicine was manufactured in India.
Substandard medicines fall into the category of counterfeit drugs. They are concoctions containing either wrong contents or incorrect quantities of active ingredients. Such products could also have no active ingredients at all.

Inaccuracy in the proportion of ingredients can produce allergic reactions. It can lead to harmful side-effects too if other drugs are being administered simultaneously. But medicines with wrong ingredients can even cause death.

J N Pande, head of medicine, All-India Institute of Medical Sciences (aiims), New Delhi, says: "Such drugs may contain the same salts (as the original), but the purity and quantity are lower. As a result, patients consume more medicines to get results." Ashwini Kumar, the drug controller general of India, brushes aside the issue. He contends that counterfeiting does not impact even one per cent of the Indian market. But there are enough indications that the poor quality drug business is brisk in the country.
An expectorant manufactured by a Haryana-based company was reportedly found contaminated with diethylene glycol. Thirty-six children -- admitted to two hospitals in Delhi between April 1 and June 9, 1998 -- developed high fever and suffered kidney failure after consuming the cough medicine. Of them, 33 died in three days.

In Amarpreet's case, the initial improvement and subsequent deterioration in his condition coincided with the change in the brand of the drug that he was prescribed. The disease was detected at the Christian Medical College (cmc), Vellore, Tamil Nadu.

He was advised to take Penicillamine capsules marketed by multinational pharmaceutical company Biochemie Austria. In June 1999, after partial convalescence, his progress was monitored again at cmc. This time the patient was provided Cilamin 250 -- the Indian version of the same drug -- by cmc's own pharmacy. Panacea Biotec Limited, a company based in Delhi, manufactures and markets this medicine. From that point onwards, it was all downhill for Amarpreet.

His father has questioned the authenticity of the medicine ever since. He maintains that he had to run from pillar to post to get it tested. But for two years, his efforts came a cropper. In March 2000, Devinder Singh approached the Sriram Institute for Industrial Research, Bangalore, in this regard. The organisation turned down his request contending that only Panacea had the stipulated testing standards, he says. These benchmarks are set by the us Pharmacopoeia (usp) and recognised worldwide as a hallmark of quality (see box: Testing procedure).

Three months later, Amarpreet was taken to cmc again. Devinder Singh alleges that though the medical college agreed to analyse the drug sample, it has yet to come out with its findings. However, Mathew Alexander of cmc's department of neurological sciences rebuts this charge. He is, in fact, not convinced that the medicine caused any harm. Devinder Singh's one-point agenda is to put Panacea on the mat, feels Alexander. He adds that the patient's father consulted doctors in the us, and changed the medicine and its dosage on his own.

Devinder Singh approached the director, drug controller, Chennai, in August 2000. He is said to have been informed that the quantity of the sample was insufficient for assay and identification tests. The analysis of each drug requires a minimum of 40 capsules in solid form. Twenty are required for the weight test, six for dissolution tests and 14 for the remaining tests. According to Amarpreet's father, the director of Punjab's health department also rejected his plea in May 2001 citing another procedural ineligibility: only samples submitted by drug inspectors are analysed.

In January 2002, a to z Pharmaceutical, Chennai, refused to conduct the test on the pretext of instrument failure, claims Devinder Singh. It was then that he contacted the Chennai-based Indian wing of international drug testing laboratory Socit Gnrale de Surveillance (sgs). It agreed to check the quality of the medicine, but only after being told to do so by its Geneva office.

A certificate of analysis from sgs India, dated February 4, 2002, clearly states that the drug in question is of substandard quality. It mentions that the Cilamin 250 sample does not comply with the usp limit of 80 per cent in the dissolution test. The report shows that in the first stage itself the drug was found to be of inferior quality.

Significantly, these results cannot be counted as incontrovertible evidence. "Parameters such as storage conditions and expiry dates can alter the final outcome," reveals S K Minocha, who is in charge of the drug section of sgs India Limited, Gurgaon. "The lab does not look into these aspects. It is concerned only with deciding what type of tests need to be conducted on the basis of the sample size," he adds.

Meanwhile, two more cases of Wilson's Disease surfaced in Punjab in which substandard drugs had exacerbated the victims' suffering.


In a study sponsored by the National Pharmaceutical Pricing Authority (nppa), it has been found that although consumers are aware of the existence of such spurious medicines they are not conversant with procedures regarding lodging complaints and getting the drugs tested. nppa is a government body that helps control drugs in India.

The legal scenario is no better. Nasser Kabir, legal advisor to a leading newspaper, avers: "The law prima facie is not well-equipped to tackle defaulters. Most of the provisions are archaic and need urgent amendment."

In this context, president of Delhi Medical Association (dma) S C L Gupta says that the body is willing to pursue such cases on behalf of consumers. dma can assist them in moving court and interacting with the media, he points out. That Gupta himself has been an aggrieved party is a sad reflection on the state of affairs.

When his son was six months old, he discovered that the infant food being fed to him was substandard. Gupta wanted to get the powder tested and haul the errant company to court. But he was advised to tread with caution since the manufacturer was big and powerful. "If I was rendered helpless, one can well imagine the plight of the common consumer," says Gupta.

The Supreme Court has taken a step in the right direction, ruling that even a dealer in drugs and cosmetics can be prosecuted for selling substandard goods. This sets the distributor and manufacturer apart. Upgradation of testing laboratories for quick analysis and setting up of special courts for speedy trials are some other measures that can restrict the entry of poor quality drugs in the supply chain. For Amarpreet's father, however, the legal battle has just begun.


In May 2002, he filed a public interest litigation petition in the Punjab and Haryana High Court. Panacea presented its defence in October 2002.

When contacted, Panacea was guarded in its response contending that the matter was sub-judice (see: Panacea reacts). But its institution manager, Ranjit Singh, asserted: "Panacea has the best standard operating practices and tablets are checked for quality control. Our laboratories are even better than the testing facility of sgs, whose certificates Devinder Singh is producing before the court."

Sometimes labs may not have the required testing standards, admits Minocha adding that on this basis Panacea can boast superior equipment. "At the same time, such facilities are not needed for all tests," he points out.

The next hearing of the case is on December 3. And with both sides digging in, the confrontation is likely to be protracted. Sadly, Amarpreet has already crossed the two-year "window period" for recuperation.