For long-lasting commitment, climate negotiations will have to keep all three goals in mind. Can they be tied together? 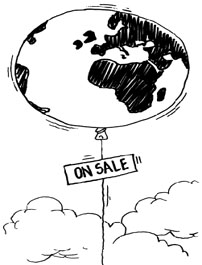 Group two: JUSSCANNZ (Japan, US, Switzerland, Canada, Australia and New Zealand)
Led by the US, they want economically effective action - minimum possible impact on their economies

For long-lasting commitment, climate negotiations will have to keep all three goals in mind. Can they be tied together?

Ecological effectiveness Whether or not the world can check climate change depends entirely on how soon we are able to move towards a global economy built on zero-carbon energy sources. 'Safe' ghg concentration targets cannot be met by simply increasing efficiencies of fossil fuel technologies.

Immediate action is needed to get out of a fossil fuel-based economy. If renewable energy technologies ( ret s) are not competing in the market by the end of the first quarter of the 21st century, the world will be locked into a fossil fuel dominated energy system well up to 2050, and carbon emissions will remain high for the rest of the century. For instance, a fossil fuel power plant built today will continue emitting carbon for 30 years.

ECONOMIC effectiveness Flexmex are currently considered the most economically effective strategy as emissions reductions can be made in developing countries at a much lower cost.

But any market-driven emissions trading system, such as the ones proposed, will automatically seek fossil fuel-based least-cost options. Mechanisms such as cdm , therefore, will subsidise the fossil fuel sector and lock out renewable energy, undermining the ecological objectives of the Kyoto Protocol.

rets - from windmills to solar cells, fuel cells and biomass energy - have witnessed remarkable technological progress and cost reductions in recent decades, despite reduced government support for research and development. Yet they have been unable to penetrate the energy market sufficiently because of increased liberalisation of energy markets and the resulting increase in competition.

They will begin to compete only if governments create conditions that favour their increased penetration. Developing countries offer the best niche markets but lack of capital prevents them from making full use of the current progress in ret s.

EQUITY AND SOCIAL JUSTICE Equity demands that poor nations have the maximum environmental space for their future growth and the threat of climate change be averted as fast as possible because they will suffer the most.

As long as the world remains within a carbon-based energy economy, a system of tradable and equitable per capita emissions entitlements will have to be set up, to equally distribute rights to the atmosphere.

To allow all countries an equal chance to develop, Southern and Northern countries will have to converge to a level of emissions that is sustainable in a manner that poor countries still have the 'ecological space' to increase emissions before they take on reduction targets.

ECOLOGY, ECONOMY, EQUALITY A system of equitable entitlements will create strong incentives for industrialised countries to get out of fossil fuel technologies and invest in renewable technologies. It will also provide developing countries with the right opportunity to start participating in the global efforts to fight climate change. Studies show that trading creates an incentive for these countries to keep their emissions low.

To avoid subsidising further use of fossil fuels and to support niche markets for ret s, trading between industrialised and developing countries under cdm should be restricted only to projects that use zero-carbon systems. This will help reduce the price of ret s and help them compete with fossil fuel technologies. The emissions reduction cost per tonne of carbon will be 3-4 times higher in the initial commitment period - some us $30-40 billion for the cdm market instead of the estimated us $10 billion market. But in the long term, investments in demand-side energy efficiency and renewable energy technologies are likely to lead to lower requirements for investment in the energy sector.

Once ret s begin to compete with fossil fuel-based systems, the problem of climate change will be arrested and the stringency placed on the world economy by low per capita entitlements will be removed.