Subsidy amounts and sales figures may not always be indicators of commercial success. After a decade-old promotion campaign, only a few Indians own solar cookers and fewer still use them. … 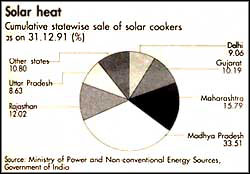 THE SOLAR cooker programme may soon grind to a halt as a result of mandatory ISI standards to be introduced this year. The Department of Non-Conventional Energy Sources (DNES) has already notified that subsidies would be given only to cookers complying with ISI standards. When the DNES and the Bureau of Indian Standards (BIS) met in March to draw up the ISI specifications, the plan was to introduce the standards from April 1993. But then the DNES decided to introduce it from this year itself.

Many small manufacturers of solar cookers will be unable to comply with the ISI standards as they do not have laboratory facilities and sophisticated equipment to test the cookers, or skilled technicians to carry them out.

Though the DNES was considering the complete withdrawal of the subsidies, it has now restored the Rs 100 subsidy given to the buyers of solar cookers. The combined subsidies given by the DNES and the Delhi Energy Development Agency (DEDA) bring down the cost of solar cookers from Rs 910 to Rs 510.

The DNES has provided as much as Rs 90 lakh as subsidies since 1989-90 to boost solar cooker sales. Ever since the nationwide programme was launched in November 1981 to promote the solar cooker, the number of cookers sold has been increasing gradually. But even after a decade, the solar cooker has not yet changed domestic energy use habits significantly.

The nationwide programme to promote the sale of box-type cookers was launched by the DNES' Commission on Alternative Sources of Energy (CASE), following the success of the Gujarat Energy Development Agency (GEDA), the pioneers in solar cooker promotion in the country.

In 1982, the DNES launched a subsidy scheme in Delhi to disseminate solar cooker technology through Super Bazaars, the chain of government supermarkets. A subsidy of Rs 150 was given on the solar cooker's price of Rs 500. This boosted the sale figures, which touched 1,564 in the first year itself.

The sales got a further boost in 1983-84 when the Delhi administration set up DEDA to promote the sale of solar cookers. DEDA's sales crossed the 9,000-mark by mid-1987. Today about 150 to 200 units are sold every month by the DEDA.

DEDA's aggressive marketing made all the difference. The agency organised demonstrations and media campaigns. In addition, it launched a new scheme under which employees of the Central government and the Delhi Development Authority (DDA) could buy solar cookers on very easy instalments.

But thereafter there was very little publicity or educational campaigns about the advantages of solar cookers. Even the Super Bazaar allegedly failed to maintain proper sales records and did not evince any special interest in promoting the sales. As the novelty wore off and news spread about the cooker's shortcomings, demand started declining. As a result, Super Bazar stopped selling solar cookers in 1985.

In a renewed effort, the government began a double subsidy scheme. While the Central government continued to pay Rs 150 per cooker, 40 per cent of the rest of the cost was borne by the Delhi administration. But even then, sales went up only marginally.
At the national level, over 200,000 solar cookers had been sold upto 1990-91. The peak annual sales reached 43,000 in 1990-91, and are estimated to be about 45,000 in 1991-92, according to DNES reports (See Table: Cumulative Sales of Solar Cookers in India).

The bulk of the sales took place in Gujarat, Maharashtra, Uttar Pradesh and Orissa where enthusiastic persons and organisations promoted it. Madhya Pradesh -- particularly in tribal areas where there is acute fuel shortage -- has been leading with 15,000 to 20,000 units sold annually in recent years (See Table: Statewise Sale of Solar Cookers).

However, it is difficult to judge the programme's success just by sales figures. Despite the immense potential it holds, the popularity of solar cooker is still relatively low. Study reports from different parts of the country reveal that people readily bought the cooker because of the subsidies, but have failed to put it to good use.

As M M Hoda of the Appropriate Technology Development Association (ATDA) in Lucknow says, "Even though a large number of solar cookers have been sold, mainly in cities, since 1980, not more than 10 per cent are being used or are in working order."

A survey done by Varun Vidyarthi in a village near Lucknow found that most of the families were concerned about children breaking the cooker's glass which is difficult to replace. One of them was reportedly being used for keeping clothes and its mirror for cosmetic purposes. More than 90 per cent villagers considered the technology useful, but only one per cent were willing to invest in it.

The cookers were not popular in the villages around Delhi either. The villagers' basic objection was that the quantity of food cooked in them was far too small for their large families. As R C Maheshwari of the IIT's Appropriate Technology Cell explains, "The moment the food layer in the solar cooker rises above 10 cm, the cooking time increases. That limits the size of the food container which cannot hold more than 200 to 250 gm of rice."

Not only is the DNES-promoted model expensive, it is bulky and heavy too. As a result, it becomes difficult to carry it in and out of the house on a daily basis.

This clearly shows the need to improve the cooker's design to fulfil the specific needs and tastes of the people of different regions. "Perhaps a smaller, sturdier and cheaper model would have made the cooker more amenable to use in rural areas," says P P S Gussain, head of the energy systems division at Development Alternatives. "It could then be taken to the fields where the farmer's afternoon meal could be cooked while he worked in his field".

Studies in different states also show that the cookers have been accepted mainly in urban areas. A survey conducted by Rita Moulik of the Indian Institute of Management (IIM), Ahmedabad, in 1984-85, showed that most of the people using solar cookers were well-educated, belonged to middle-income groups and had a predominant interest in saving fuel costs.

So, in effect, solar cookers have helped save kerosene and LPG, but not firewood for which they were sought to be promoted. This fact is borne out by a 1991 study by Ravi Moorthy, also of the IIM, that showed that solar cookers were instrumental in saving LPG and not fuelwood.

The highly centralised nature of the sales promotion programme is a major reason why solar cookers have failed to become a significant substitute for the conventional cooking fuel. Besides, being under considerable pressure to meet sales targets, the nodal agencies often adopted dubious methods like re-selling the same cooker in different names to claim subsidies.

The subsidies also created problems of a different kind. Since the cookers were cheaper in Delhi than in the neighbouring states of Uttar Pradesh, Punjab and Haryana, customers from these states would buy their cookers in Delhi. This not only distorted the demand for the cookers, but also posed a threat to their sales in the states.

Taking advantage of the situation, some manufacturers got into a nexus with the customers and bought cookers back from them at a marginally higher price and offered them back to DEDA to claim full manufacturing costs, says Sudhanshu Mishra, project officer with DEDA. Eventually, serial numbering had to be introduced to curtail such irregularities.


In addition to these factors, poor marketing strategy, and absence of user education and after-sales services were also responsible for the lack of popularity of solar cookers. At present, there is not much of advertising or education about the cooker's advantages. Secondly, there are no servicing facilities. Spare parts are often not available even in urban areas. Maintenance is thus virtually left to the housewives.

A DNES official complains that his solar cooker has been rendered ineffective because the gasket that insulates the space between the glass cover and the box has worn out with exposure to sunlight. His efforts to obtain another gasket through the manufacturer, with whom the DNES is constantly in touch, has not met with any success.

Strangely, the cooker comes with only a limited warranty which does not include replacement of glass or mirror, the most fragile components of the device. In the absence of after-sales follow-up, the buyer has little understanding of how best to operate the device. For instance, one housewife in Delhi thought that the cooker had to be turned every half-an-hour so as to face the sun, a tedious task in the heat of summer. The fact is that the cooker works reasonably well even if turned around only once an hour.

DEDA admits that success has been easier in urban areas. But now even this is becoming difficult. Officials point out that it is not easy to sell solar cookers to urban people who are increasingly living in cramped multi-storeyed apartments with small kitchens and little access to sunshine. Very few of these apartments have open terraces or balconies which would receive sunlight for extended hours for solar cooking.

Divya Madan, a resident of central Delhi, owns a solar cooker but cannot use it. Her husband says he bought it "because I wanted to do my bit for conserving energy, but we have not started using it". She explains: "The past few months were winter months, and our balcony gets very little sunlight during winter. Moreover, I have started working now, you see, and I don't think it will fit in with my routine." Community-type solar cookers would seem to be the right answer under some situations. The larger community solar cookers have also been receiving government and state subsidies to cover upto 90 per cent of cost. DEDA has distributed about 40 community cookers since 1984 to government agencies, defence establishments, hostels and hospitals. But Mishra claims DEDA has not received any feedback from these users and very few of them seem to be in use now.

Another option is to modify building designs so as to make the maximum use of available sunlight. A south-facing platform, for example, could be made along the kitchen window to place the solar cooker in the sun. The DNES has begun some halting work in this direction. It has promoted a solar passive architecture group consisting of members from the National Building Organisation, Housing and Urban Development Organisation, Central Public Works Department and DDA, and professional architects to develop such architectural designs. However, public housing authorities, architects and civil engineers are by and large reluctant to change their way of doing things.

Given the situation, the DNES' plans to promote the solar cooker through architectural innovations need to be preceded by efforts to make the cooker suitable for rural conditions, and to be followed by an appropriate programme for popularisation and marketing. India was the first country to develop a solar cooker, but little effort has been made so far to assess the response of those using the cookers and modify them accordingly, or even to investigate why a large number of them lie unused. Unless the cookers are made sturdier, lighter, less fragile and easy to use, they are not likely to be seen under the sun where they belong.