India needs a proper GM regime, if it wants a global say 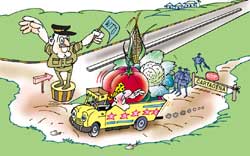 The conflict between trade and environmental concerns was brought out in the open on the global stage in early February at a World Trade Organization (wto) ministerial. The European Union (eu) had banned some genetically modified organisms (gmos) from 1999 to 2003. The us, with Argentina and Canada, challenged this in wto. wto has declared in favour of the us and declared the ban illegal, in an officially unreleased judgment.


This has again brought to fore the long-standing debate about gm crops. eu may not be greatly bothered with the order because it has revised its regulation regime for gmos but the wto order was one more reminder to everyone about what the failure of the Cartagena Protocol could mean for the world. Many countries are bound to hotly debate the judgment in the conference of parties to the protocol to be held in Curitiba, Brazil, from March 13-17, 2006, just days before the meeting of parties of its parent treaty -- the Convention on Biological Diversity.

The Cartagena Protocol deals with the international movement of gmos. gmos include various commercially important crops like modified maize, tomatoes and wheat. The scientist community has for long doubted their compatibility with the environment and consider them an environmental and health threat. Public opinion against them is strong, as in Europe. On the other hand, they are necessary for, say, Africa to achieve food security.

The protocol, the ratification of which was seen as an achievement for the environmental lobby, works on the precautionary approach. Meaning, exporters need to inform importers well in advance of a gmo shipment through an advance informed agreement. If the consignment is intended for 'intentional introduction', permission is mandatory. The follow-up procedures are strict However, the bone of contention is the procedure to be followed for gmos intended for agricultural commodities. Right from the start, the exporter lobby headed by the us -- the Miami Group -- has opposed the labelling and segregation measures that the eu and other importers have been pushing for. This matter remains to be sorted out at the imminent Conference of Parties serving as the Meeting of Parties (copmop-3), especially because this debate almost derailed negotiations initially.

So what stand can we expect the Indian government to take? Possibly none. By now it is obvious that India is a soft state when it comes to gm crops, believe experts. Sachin Chaturvedi of Research and Information System for Developing Countries, a Delhi-based think tank, asserts that India has three problems. First, the advance informed agreement infrastructure is already in place. Customs establishments already use a technology through which an exporter informs the importer of a shipment in advance and most of the trade anyway happens through this. But for some reason it has not been used for Cartagena. Secondly, after the arrival of advance information we need better quarantine and segregation facilities. But even if that exist, a third problem remains. "The mother of the problems," as Chaturvedi calls, it is the lack of technical inputs. Most countries have determined limits of gmos they will tolerate in a 'pool of non- gmo units'. But India has taken no such step. "We do have the necessary technological infrastructure and the scientific competence. All we lack is the will," Chaturvedi says.


Compliance with Cartagena can follow only after these are sorted out. India also needs to streamline the machinery to deal with gm crops. The ministries of agriculture, environment and forests and commerce are all involved in the gm business. The regulatory authority for transgenic crops in India is the Genetic Engineering Approval Committee but it doesn't handle trade. The M S Swaminathan Task Force recommended the formation of a National Biotechnology Regulatory Authority but that has not been followed up. There are no national guidelines. Only if India addresses these ambiguities can it have a significant role at copmop-3.

This year the Cartagena parties were expected to thrash out issues related to liability and redressal, capacity-building and compliance. But the new wto ruling will add a twist to the entire story. The eu and us -- importer and exporter -- are pitted against each other. The subtext is the conflict between trade and environment. The us has wto backing. The eu is expected to stand by Cartagena, though it does not have a clear dispute-settlement mechanism.