Reduced to filthy, foul smelling cesspools, with mosquito larvae arawing their lazy, intricate patterns on the green surfaces, the same takes and tanks in urban areas draw a passerby's game is … 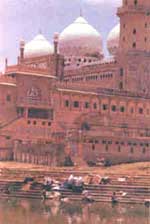 Urban wetlands, the lifeline of Indias cities for centuries, protected by tradition and preserved by people, are being ravaged by sheer greed and neglect

WHAT do the Consumer Action Group, Madras, the Citizens Against Pollution, Hyderabad, the Nagarik Marich and Mudiyali Fisherfolks Cooperative Society, Calcutta, and the Citizens Voluntary Initiative for the City, Bangalore, have in common? They are all struggling against the mindless destruction of the urban wetlands in their respective cities. And these are just some examples of such struggles all over the country. Today, it is a civil war of sorts. The country is divided into 2 distinct belligerent forces. It is the war of the wetlands.

At the heart of the war is the cultural divide over the attitude towards our natural resources. Under lingering colonial hangover, officialdom is pursuing a shameless aping of Western methods of what it terms 'development'. But more and more individuals are today inclined to reach back to the native wisdom of our ancients, who had constructed and cared for these waterbodies religiously, culturally and socially. And though minor battles are being won by the people here and there, the scenario remains grim. Tradition is still fighting a losing battle.
In the past, lakes and tanks were a very important aspect of water supply for drinking and irrigation in India in both urban and rural areas. "in a country where 75 to 90 per cent of the total rainfall occurs within four months, June to September, which when compressed adds up to just 25 to 60 days, the tanks were part of a simple yet intricate system of water vesting, built to store rainwater for the rest of the year. T Somashekhar Reddy, author of Forfeited Treasure- a ad on the irrigation tanks in Karnataka.

Cities which did not have a perennial river-source. Pod ularly, had to have a tank in every possible catchment an Elaborate systems evolved as new tanks were built in low areas to catch the overflow of those above. Every drop was cious.

Tank building was considered a noble deed by the nali and by the rich and wealthy. The city of Hyderabad, for e" ple, owes its many lakes to the foresight of its two sol, dynasties, the Qutub Shahi (1564-1724 AD) and the Asaf rulers (1724-1948 AD).

South India is particularly rich in tanks, with the CINA Hoysalas and Vijaynagar kings paying great attention to irni tion. While the Cholas confined themselves to a large extent what is presently the state of Tamil Nadu, the Hoys" bL close to 204 tanks in Karnataka during their rule between I Ith and 14th centuries.

Writing about the tanks in Karnataka in 1986, a Brig engineer noted that the tanks, constructed by the "rajahs wealthy natives," were "magnificent works, on a gigan scale .... got up regardless of expenses, as their originators h for object the attainment of religious merit by the execution such works, quite as much as the acquisition of grain by profits of improved cultivation."

Little wonder then, that by 1881, the then state Karnataka had one tank for every 15 square-infles. By theit had become difficult to locate a suitable low-lying site to more tanks. "Any new work ... would almost certainly be found cut-off supply of another lower down and interfere with interests," wrote one Raj commentator. The beneficiaries s aho paid for the maintenance of the tanks and often wed panchayats (local governing bodies) to lay down rules 7 the use of water, and its equitable distribution. in Karnataka, festivals were organised around tanks, during g which farmers would desilt the tanks and an them to maintain their original capacity. mubekhar Reddy records that in the begin- eg of the 19th century, 7,897,500 hectares of How d in India was irrigated by tanks built indige- cannot ady. "This system of water harvesting made ! vilages totally self-reliant," says K L Vyas, V401 the aw or of the "Save the Lakes Campaign", ar4, he ruched by Hyderabad's Society for the pervation of Environment and Quality of Life (SPEQL).

In the more humid regions, like Calcutta, iands were part of the city system for long. from we was human action behind their formation k. though, unlike the tanks of south India, they were not irely humanmade. The East Calcutta Wetlands were ned gradually over 400 years, due partly to the natural cm of siltation of the distributaries of the Ganga, and partly ue to the growth of the city and its consequential sewage needs.

The Calcutta wetlands are in many ways unique. The main inage fi)r the city has been the Hooghly river, a distributary he Ganga, situated west of the city. However, the topographical incline of the city is eastwards.

The British colonisers always held the marshy lands cast of their new township suspect. Tbese were marked off as the Salt Lakes, as the water was permanently stagnant and salty. The area had been partially colonised by peasants who were once landless. Over the years, these peasants not only Icarnt to live with this hostile environment, they even developed considerable skills in resource recovery. They learnt that nature had its own ways of purifying waste water, even sewage. They knew, without being wdy able to articulate it in so many words, that the epj*M wetlands are essentially solar reactors, where, through a complex process of algal photosynthesis and plankton activity, fresh oxygen is released e, Me into water, making it fit for fish cultivation and agriculture, and help in many other ways.

Eventually, when the British fed this area aw with sewage, and even later on, when Dhapa became the dumping ground for the city's solid waste, the salt-water fisheries metamorphosed into sewage-fed ones. The fisherfolk easily adopted themselves to the new system.

"The fisherfolk did not look upon sewage as waste, but as a resource," says Dhrubajyoti Ghosh of the Calcutta Metropolitan Water and Sanitation Authority. It was only after 1980 that this system came to be studied officially by the state government authorities, and the complete implications of the wetlands as an ecosystem came to be realised.

The Calcutta wetlands also serve as a flood cushion for a city which receives an annual rainfall of 1,500 mm. As and when these are came under the assault of brutal and mindless reclamation, starting in real earnes-t with the development of Salt Lake City (now Bidhan Nagar), a satellite township, which started coming up in the late '60s, the incidence of monsoon flooding in Calcutta proper started. The problem has been growing over the years. This only helps emphasise the importance of urban India's traditional waterbodies.


Tanks, however, did not entirely suit the British system of governance. "Their objective was resource extraction. As land revenue from each village was assured through a well developed ryotwari and N zamindari system, they knew that the construction of tanks would not enhance revenue,. says Somashekhar Reddy. Maintenance, by extension, would mean useless drainage of the exchequer.

So, instead of the community-managed indigenous water systems, like tanks and wells, which deteriorated after they stopped receiving state patronage, the emphasis shifted to diverting and pumping river water through projects like the Punjab and Deccan Canals. And India's present obsession with dams and other largescale water projects took root.

Little has changed after Independence, with minimal funds being allotted to minor irrigation projects in the Five Year Plans, and modern dams being anointed as the "temples of modern India" by the first Prime Minister, Pandit Jawaharlal Nehru.

As existing systems fail to provide the metros with suffi-cient water for their burgeoning populations today, ambitious projects are being drawn up to pump water over large distances at enormous costs. "The dependance of man, business and industry on municipal water is total, and no alternatives are developed until a crisis develops," says D K Subramanian of the Indian Institute of Science, Bangalore.

Over the years, the tanks and wetlands have not only been neglected, they have been systematically encroached upon, or have irreverently been made the receptacles of city muck. Independence governments have meticulously followed the footsteps of their former colonial masters and found the urban waterbodies to be the best places for siting their ambitious 'developmental' projects, especially, town expansion projects.

The fallouts have been many: in Madras, it has ereated a severe water crisis, and monsoon flooding to boot. It is ironic that a city which enjoys the boon of such massive rainfall has to look up to drawing in water from a distant river at prohibitive costs to quench the thirst of its denizenry. Industry, especially the textile sector, once saw in Indore a blue-eyed boy, but in just under two decades, it is flying from there to more fluid climes. And Bangalore and Hyderabad are reeling under water crisis year after year.

No wonder then that citizens countrywide are becoming increasingly impatient with this development model being pushed by the powers-that-be. That is the war over two visions. As Dhrubajyoti Ghosh says, it brings in more money to go for the western models. Pumped water brought from far off places are more "in"; maintaining old tanks and systems of yore are not just passC they are branded as ridiculously hanging on to moribund systems. But as the instance of Delhi's Hauz Khas shows, the developers who speak thus, along with the fashionable armchair environmentalists who overtly or covertly support the merits of this model of growth, are not even aware how we are marching into a noxious future.

The lesson is clear: it is futile to indulge in high-sounding, jargonised rhetorics, unless urbanites learn to live in harmony with nature in their own habitat. And if environmentalism begins and ends with merely protecting endangered flora and fauna, urban lifestyle itself will become endangered. Our cities cannot survive on the corpses of their wetlands.