Scientist R SUKUMAR of the Centre for Ecological Studies, Bangalore, says that DTE correspondent Anju Sharma was slipshod in her homework on elephants 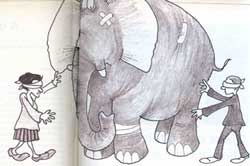 ANJU Sharma's reply to my letter (Down To Earth, November 15, 1994) is replete with misinterpretations, incomplete understanding and, in at least one instance, a downright falsehood.

Nowhere do I state that all elephants in a population would regularly raid crops. I have recognised that only some among the males are notorious raiders. (See The Asian Elephant and Elephants Days and Nights). In the case of female-led family groups, I did not know the identity of crop-raiders but have mentioned a similar possibility of some herds doing most of the raiding (PhD thesis Indian Institute of Science, 1985, pg 317). I have also emphasised individual differences in the behaviour of elephants towards humans and the role environmental influences play in shaping them.

Perhaps Sharma was misled by the fact that, while calculating average frequencies of raiding, average consumption of crops, etc, I have used the figures pertaining to the total elephant population; but that is how averages are calculated.

In terms of managing the elephant population through capture to minimise crop damage, I have clearly stated that both kinds of raiders, family herds and adult males, have to be captured (The Asian Elephant).

If Sharma had cared to go through pages 123-125 of the book, she would have realised that of the total economic loss to crops in my study area and during my study time, about 60 per cent was due to adult male elephants and 40 per cent due to family herds (which includes sub-adult males).

Surely, Sharma, who seems otherwise amazingly well-versed in all aspects of elephant ecology, should have known that during the past decade poaching has drastically reduced the proportion of adult male elephants. With this, the extent of crop damage has already come down substantially.

In Elephant Days and Nights,I was specifically discussing the reduction of conflict -- without upsetting the population growth rate -- by removing notorious males, not entire herds. I still stand by this. Capturing females will lead to a negative growth rate, and if it has to be done it can be decided upon by field managers and policymakers alone.

Most emphatically, I do not "dismiss habitat loss as a reason for crop raiding". I have clearly stated that reduction and fragmentation of natural habitat increases the incidence of crop raiding.

In the quoted paper (Journal of Tropical Ecology, 1990, 6:33-53), I was not at all talking about elephants shifting their home range, but merely about them spending more time foraging in more lush feeding grounds within their normal range.

Observations in some regions strongly indicate that elephants would attempt to shift their home range entirely if their habitat were to be highly "degraded". A study by Ramesh Kumar of the Bombay Natural History Society (BNHS) in the Housr Forest Division points to this. For some unknown reason, Sharma does not consider this study.

After re-reading Sharma's article (August 15, 1994) and her reply to my letter, I can smell a rat: did she actually read my paper or did she depend partially or entirely on someone else for interpreting my work?

THE results of the BNHS study are public knowledge, and have been discussed at the International Seminar on the Conservation of the Asian Elephant held in Mudumalai in June 1993. Sukumar was present there. Since then, draft reports and papers, which I studied in Mudumalai in May 1994, have also been circulated among forest department officials. As a journalist, I am well within my rights to comment on them.

Sukumar says that nowhere in his papers does he state that all elephants in a population raid crops. But then, nowhere does he remotely suggest that some elephants do not raid crops either. The BNHS study makes precisely that point. In fact, innumerable references in Sukumar's papers suggest that he is talking about all elephants. Here's just one example from the very reference he quotes in his letter:

"Elephants inhabiting an area with a clear surplus on natural food resources would still resort to crop raiding. Even if there were just one bull in a large expanse of forest it could be expected to raid crops to some extent." (The Asian Elephant, 1989; pg 133).

Sukumar's mode of calculating averages (which has not confused me at all) further gives lie to his newfound contention. If an area has 20 herd members, and only 10 are raiders, and 1,000 kg of crops are damaged, the correct average would be 1000/10 = 100 kg. But Sukumar's average is 1000/20 = 50 kg. His method only shows he is not taking into account the fact that some elephants do not raid crops.

To arrive at the correct average, one would first have to find out the number of raiders in the population. Escaping this hard work makes the researcher's calculations irrelevant. Sukumar's average can only serve to confuse forest managers.

The manager only needs to know how much damage each sex is responsible for, or the frequency of raiding by both sexes (as has been done by Sukumar and the BNHS). Then, if a management decision is taken to remove some raiding animals, the identity of the raiders and the degree of raiding will have to be established.

If Sukumar were to read my article a little more carefully, he would find that I have already said that poaching has reduced males, resulting in skewed sex ratios. This was another reason, the BNHS says, for not capturing only males. While poaching has definitely resulted in reduced crop damage, it has also decimated their numbers: now, capturing males without investigating the extent of damage they do is unwise.

Sukumar thinks that it is "extremely naive" to point out that there are more females (or herd members, which would include sub-adult males) in an area than males. Yet, this is a very relevant point: more herd members cause more damage than males in that area; hence the need to deal with them. Managers cannot generalise, as Sukumar does while wrapping up his paper in Biological Conservation 1991, 55: 93-102: "If a decision to cull has to be taken it is better to selectively cull the male of the species."

Sukumar says he suggests removing males because removing entire herds could cause a population growth rate drop. But elephant numbers are actually increasing and their habitat shrinking. But if the degraded habitat cannot sustain the elephants, it is better to manage a stable growth rate. And the decision about capturing or not capturing females can only be taken after researchers have identified the raiders.

Sukumar asserts that he "does not dismiss habitat loss as a reason for crop raiding". He refers to the section on "Reduction and fragmentation of natural habitat" in The Asian Elephant, and the Journal of Tropical Ecology to refute this charge. But instead of discussing habitat loss, Sukumar deals only with the increase in the perimeter of the forest-cultivation boundary, which brings the elephants into greater contact with cultivation, and results in more raiding.

He says, "The larger the size of the cultivated enclave, the longer its perimeter...the higher the probability of an elephant making contact with its boundary," and "...elephants confined to a small isolated habitat can be expected to indulge in raiding crops. Fragmented patches provide a convenient base for crop raiders."

Habitat loss occurs due to many activities besides cultivation. And there is a difference between looking at habitat loss as something that creates greater opportunity for raiding, and habitat loss as a loss of resources which forces the affected elephants to raid crops.

The BNHS study clearly showed that not all elephants raid crops: 2 of the 3 clans which came into contact with cultivation in their home ranges during the 3 years of the study never raided crops.

Sukumar does discuss the question of resource (food) reduction due to habitat degradation in the next section on "Degradation of habitat". He says, "Degradation of the natural habitat is often mentioned as the primary cause of crop raiding," but his observations on raiding in degraded and good areas "showed no clear pattern" -- which implies that this did not lead to crop raiding. He goes on to assert, "Elephants inhabiting an area with a clear surplus of natural food resources would still resort to crop raiding."

Sukumar states that he was not talking about elephants shifting their home range, but about spending more time foraging in more lush feeding grounds within their normal home range. Considering the fact that he does not mention home ranges at all in his chapter on crop raiding, how does he expect his reader to come to this conclusion? In any case, habitat degradation does not merit discussion in a paper on crop raiding if all it leads to is the clan luxuriating in lusher parts of its home range.

I suggest Sukumar read my article -- carefully -- for a 3rd time. He will find that I have discussed in some detail the fact that elephants attempt to shift their home range if their habitat is degraded (pg 27, para 6 and 7). I have not mentioned Ramesh Kumar's study simply because I had not read it then.

Sukumar should realise that new findings, using better techniques, are bound to replace old ones. I had referred to his study in my story because there was material in it that made it unsuitable for today's management scenario, but was being relied upon by Project Elephant.