A solar system within a solar system? Seems like a riddle, but if one planet can hold 1,000 earths, is 318 times as massive and 1,400 times more voluminous, what do you call it? Jupiter, with its … 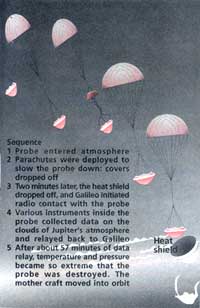 IT IS being hailed as one of the most ,epochal' moments in the history of unmanned space exploration by the National Aeronautics and Space Administration (NASA), USA: Jupiter, the largest planet in Our solar system, now has an Earthly visitor - Galileo.

Defying adverse predictions, Sur mounting all delays, disasters, and temperamental equipment, the'Rolls Royce of all American spacecrafts' has Finally made it to Jupiter. During its two-year spin around Jupiter and its lunar retinue, Galileo is expected to provide richest scientific information ever procured ,about the giant gaseous planet.

The 1, 180-kg (two and a half tonne) NASA spacecraft went into orbit around Jupiter on December 7, 1995, after it successfully hurled a 'suicide mission' probe into the depth's of the planet's atmosphere to r a detailed study of the Jovian system.

"All of its were thrilled when it was confirmed that the Galileo orbiter was receiving a signal from the probe. These are the moments that make all the hard work worthwhile," an exuberant Wesley T Huntress Jr, NASA associate administrator for Space sciences, told Down To Earth.
In 1610, the Italian astronomer extraordinaire, Galileo Galilei, peered through his handmade optik-tube - the first astronomical telescope in the world - and 2 discovered Jupiter's four major moons. They are Io, Callista, Ganymede and Europa. Since then, further quests were tried.

More the astronomers examined Jupiter from afar, more than recognised its twin attractions. First, the planet itself could hold more than a thousand Earths, arid it is 318 times more massive arid 1,400 times more voluminous than Earth.

Second, it resembles a small star and some scientists believe that the suit arid Jupiter was born as unequal partners in the binary star system. it is composed almost entirely of hydrogen (89 per cent) arid heliurn (10 per cent) - principle ingredients of gaseous clouds from which the suit arid nine planets are believed to have formed.

Just before Galileo's tryst with destiny, its 746-pound heat shield covered atmospheric probe, which was separated from the mother craft in July 1995 and flew independently since, pierced Jupiter's thick ammonia clouded enter atmosphere to explore the volatile mass beneath.

Even as scientists, 600 million miles away, at the NASA jet Propulsion Laboratory (JPL), Pasadena, California, received this crucial confirmation, the 'suicide' probe was well into its mission, Built for NASA by the Hughes Space arid Communications, Los Angeles, the atmospheric probe carried six experiments to analyse Jupiter's atmosphere, and transmitted the data back to Galileo, positioned 13,300 miles above the planet - all expected to be done within 75 minutes before it succumbed to extreme heat and pressure.

Descending on Jupiter at the speed of 170,000 km/hr, the probe hit the Jovian atmosphere with 3,50 times the force of gravity - more than 40 times the gravitational force a pilot might encounter in a high performance jet.

The heat shield covering the probe was then discarded, thus exposing the sensors, which would gather the first data on Jovian composition, temperature, pressure, electrical activity and wind speed, sulasquently to be transmitted to Galileo for relay to Earth.

Some scientists speculate that the probe was able to penetrate about 400 miles into the Jovian atmosphere. But scientists at the JPL have now confirmed that Galileo's atmospheric probe had survived its daring dive and lived long enough to beam back nearly 57 minutes of invaluable information during its fatal descent.

"We are absolutely ecstatic that our ... first ever penetration of an outer planet's atmosphere has been so wonderfully successful," exclaims William O'Neil, Galileo project manager at the IPL. The full suite of the tape-recorded observation would, however, not be played until February this year.

just after the probe completed its mission, the mother craft had its own moment of glory. A 49-minute rocket firing put it in such a precise orbit that an earlier planned course correction mission was not required.

Galileo began its two-year tour around Jupiter equipped with the highly advanced and sensitive CCD camera, compared to the less accurate vidicon camera earlier carried by Voyager. It also has a near-infrared mapping spectrometer - a lesser-known technology during Voyager's odyssey. Moreover, the two-year mission allows the craft to study Jupiter's temporal changes.

Although the probe was destined to be the most dramatic part of the mission, Galileo has more responsibilities. The spacecraft will make 11 orbits, 10 of them close flybys of three of the 16 moons of Jupiter - Europa, Callisto and Ganymede - each time using the moon's gravitational Pull to Swing it into a new orbit for the next encounter. It is also expected to study Jupiter's fourth major moon Io, which is volcanically active, but from a safe distance.

NASA Scientists have now predicted that the craft should reach its next target, Ganymede, on June 27, 1996, instead of July 4, 1996, as previously assumed. "Galileo will go very close to three of the four major moons of Jupiter - as close as 200 km. We should receive images 100-1,000 times better than what Voyager got," says O'Neil.

Jupiter's moons have often been regarded as some of the strangest structures in the solar system. Europa, for instance, may be one of the moons that holds some real surprises, claim NASA scientists. It may be a live real water-world with a thin crust of frozen ice on top. And Callisto, is thought to be a part of an ancient system that contains a lot of clues about how the moons probably looked 4 billion years ago before they underwent geological activity.


Scientists believe that Jupiter has retained most of its original elements. "Most of what Jupiter started out with, it still has," says a probe scientist at NASA's Ames Research Centre in Mountain View, California. This makes the Jovian system seem like a giant laboratory which holds answers to many cosmological queries.

Conceived in 1976, on the recommendations of a scientific study group headed by James Van Allen, now a physicist it the University of Iowa, the Galileo project was almost cancelled in 1981 for budgetary crunches and since then, has been resuscitated twice. The original plan was to launch the space-craft in 1982, but was defered. The next launching was held up again because of the Challenger disaster in January, 1986.

The Challenger experience compelled the scientists to abandon the idea of launching Galileo by a more powerful but potentially explosive liquid-hydrogen fuelled Centaur rocket. Instead, they opted for a safer but less powerful solid-fuel rocket.

Nearly 50 pounds of plutonium that was to be used for producing electricity on Galileo's probe, made the launching the most disputed ever. Just before its scheduled take-off in 1989, three American anti-nuclear groups tried to block the launch in a Federal District Court in Washington, apprehending a serious environmental onslaught.

But finally, Galileo began its six- year, 3.8 billion-kin ride to Jupiter safely tucked in the cargo bay of the space shuttle Atlantis, on October 18, 1989.

The unmanned nuclear powered probe followed a bizzare, multiloop route to Jupiter. Forced into a longer journey, the spacecraft conducted scientific experiments, took snaps as it flew by Venus once and Earth twice. It encountered two asteroids, 951 Gaspra and Ida, then discovered a small satellite, Dactyl, orbiting Ida - the first confirmed satellite ever found orbitting an asteroid. Galileo observed huge fragments of the comet Shoemaker Levy crashing into Jupiter, capturing images of impacts invisible from Earth, and also endured the most intense interplanetary storm ever measured.

Galileo's circuitous route, the most cumbersome and Perhaps the most risky ever undertaken by a spacecraft, was necessary so that the spacecraft could use the gravitational pull of Venus and Earth for accelerating towards Jupiter. Says Torrence Johnson, Galileo project scientist, "All of these celestial gymnastics, or tripple billiard shot if you will, was designed to give Galileo enough energy to get to Jupiter."


But in 1991, Galileo's main 16-ft wide umbrella-like radio antenna failed to Unfurl, severely reducing its ability to transmit scientific data to Earth. So, the NASA scientists decided to record the data on the craft's tape machine and transmit it using its small navigational antenna, Through clever changes in software transmitted to Galileo, scientists reprogrammed the on-board computer so that information could be stored more efficiently.

JPL engineers also devised ingenious ways to compress the data transmitted, rising mathematical codes so that the same information was relayed to Earth in fewer bits. The only hitch was that data flow was slow. To reduce the data volume, each on-board scientific instrument would edit its own data before locking it in the craft tape recorder to save space. This data would then be played into the central computer memory, where it will again be edited and only the most important data will be preserved and transmitted to Earth.

The NASA scientists are both cautious and optimistic in assessing the effects of technical snags hampering the unique mission. "Galileo will still be able to accomplish at least 70 per cent Of original scientific mandate," asserts Huntress. "if we can get this far, I have no doubt that the mission will be successful," says Galileo project chief scientist, Richard E Young.

Regarding colossal costs involved in the project, critics frequently cite the loss of $1 billion when the Mars Observer craft disappeared in 1993, after a suspected hardware failure, and maintain that NASA Should opt for new generation smaller, faster and cheaper space missions.

Preliminarly indications reveal that NASA IS future missions may be a mix of mega and micro projects. Whatever happens, it is clear that the Galileo mission may not be the last Of NASA's space dinosaurs. But what may be significant about future launches, is not so much their size, but an increased emphasis on the focussed nature of their missions.

11 NASA has a very robust series of small but focussed missions planned to explore the solar system. The P1, is working on a concept of some innovative, low-cost spacecraft to send to Pluto tinder an effort called Pluto Express," says Huntress. The Discovery programme will be sending missions to an asteroid, the Moon and a comet. The New Millemium programme wil he developing advanced technology for future planetary missions to outer planets eadv next century, he adds.

NASA and the European Space Agency have jointly planned a project called Cassini to explore Saturn scheduled for launch in 1997, and arrival in Ai) 2004. As regards Galileo, it may be months before the data gathered is processed and the mission declared successful, but it is hoped that the waiting shall prove fruitful after those six long years Galileo took to reach Jupiter.