Are goats responsible for increasing desertification? No, say many environmentalists and researchers. In fact, this hardy animal fertilises degraded land efficiently, besides being … 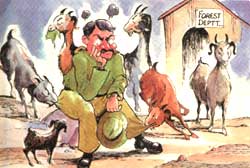 WHILE foresters and policy-makers cry themselves hoarse calling for bans and pointing accusing fingers at goats, the animals themselves go on unperturbed, secure in the fact that for the poorer sections, they are often the only means of survival.

The primary accusation against goats is that of desertification, though all evidence points to the contrary. R M Acharya, president of the International Goat Association, feels that goats are not responsible for environmental degradation. They, in fact, facilitate ecological regeneration of degraded lands, says he.

This view was endorsed in a 1987 report by a high-level task force constituted under C H Hanumantha Rao, eminent economist and a member of the Planning Commission. The task force was set up to look into the goat question because Rajiv Gandhi, the then prime minister, was keen to ban goats. The controversial report, however, opined that "sheep and goats do not pose a threat to the ecology as is generally believed.... their negative effect, if any, on ecology has been highly exaggerated."

Chandi Prasad Bhatt, well-known environmentalist and leader of the Chipko movement, who was a member of this task force, was violently opposed to the proposed ban. "Only people in Delhi can talk of such things," says Bhatt. "In the Himalaya, they (goats) are the main beasts of burden."

But policy-makers, Acharya points out, chose to have this report suppressed. As pro-cow and pro-forest lobbies continue to hold sway, there are hardly any inputs going into increasing goat milk and meat productivity.

The degradation of grasslands and rangelands in India has been primarily due to mismanagement and overgrazing by livestock. Unlike cattle and sheep which graze close to the ground, thus loosening the soil and rendering it more susceptible to erosion, goats spend as much as 90 per cent of their time browsing. They defoliate the smallest branches without damaging the twigs. Contrary to popular opinion, their saliva deposited on bushes actually enhances leaf growth. Goat saliva has been analysed and myxatol, a fertiliser, has been developed using similar constituents for use on tea bushes.

Moreover, as goats tend to move around a great deal, they help fertilise the soil and disperse seeds widely. Seeds eaten by goats germinate faster as their outer coat gets treated with acid.

"The blame for encouraging desertification is heaped on the goat because it is often the last animal to be spotted wresting sustenance from denuded areas," observed R V Singh, former director general of the Indian Council of Forestry Research and Education, Dehradun. Drake Hooking, a consultant to the Indo- Swiss goat development and fodder production project in Ajmer, adds, "Goats are not the problem, people are."

Goats were first domesticated in West Asia by about 7500 BC. They were then adapted by Afghan communities and came to India and north China via the Khyber Pass. What helped them to survive vastly differing climates and ecosystems was their ability to adapt to local conditions. As N H Casey, a South African livestock scientist, pointed out, when drought devastated fodder and agricultural production in South Africa, the goat population was largely unaffected.

This capacity to adapt has given rise to a large genetic variability in goats. There are 102 known breeds and numerous less known ones, half of which are in Asia. India has about 20 indigenous breeds, while Pakistan and China have 25 each.

In Europe, the Saanen, Toggebburn and Alpine breeds have been encouraged primarily because of their high milk-yielding capacity. The Jamunapari is well known in India, as also dwarf breeds like the Black Bengal, Banbari, Malabari and Assam Hill for their prolificacy and early sexual maturity. The Pashmina goats of Ladakh produce the finest quality of cashmere in the world while the Sirohi breed of Rajasthan is very hardy.

Of the world population of 527 million goats, 495.1 million (94 per cent) are found in the developing world. The goat population has increased more than any other livestock species: an increase of 21.16 per cent between 1979 and 1981. Yet, in terms of meat and milk production, it accounts for only 1.5 per cent and 1.6 per cent of total production respectively.
The goat has high economic and nutritional significance for small and marginal farmers and the landless. C Devendra of the International Development Research Centre in Singapore points out that in a country like India, which has the largest goat population in the world, the animal is especially important. Some 35 per cent of the total meat consumed here comes from this animal. He estimates that goat meat, milk, skins, pashmina, hair, offal, blood and dung contributed as much as US $1.6 billion to the Indian economy in 1990. In the West, where goats are reared primarily for milk and cheese, an intensive production system prevails, with high feed and veterinary inputs. In sharp contrast, goats in India and other developing countries are usually reared in extensive or semi-intensive situations.

In the former situation, they are just left to graze in open fields, while in the latter, they are tethered to feed on agricultural waste, thus fertilising the fields in the process. A goat can produce as much as 130 kg of dry manure annually. In south India, especially, a substantial portion of the income generated from goats is from "folding", an arrangement under which goatherds are paid by farmers to get the animals to graze on the latter's fields and make them more fertile with their nutrient droppings.

Goats are kept usually by women and children. Women and goats in particular share an intimate relationship. As C M Ketkar, secretary of the Rural Agricultural Institute in Narayangaon, Maharashtra, points out, often women prefer to neglect their children for their goats.

Efforts are now being made in a number of areas across the country to train women in goat management. B Nimbkar, secretary of the Maharashtra Goat and Sheep Research and Development Institute, Phaltan, has even got plans to get women's cooperatives to teach women how to slaughter the animals in an effort to make them independent.

Goat milk is an important source of nutrition for a majority of the rural Indian population. It is an excellent supplement to mother's milk: it is easily digestible and causes fewer allergic reactions than buffalo or cow milk. Indians even consider it superior to cow milk.

The income of the goat-owner is usually augmented by the sale of the animal's meat, fibre and skin. The milk is primarily consumed by the owner. The market for goat milk is very small: 1.5 million tonnes of goat's milk is produced annually and this is only 3 per cent of the country's total milk production. Goat milk is usually sold mixed with cow and buffalo milk. Hence pure goat milk is rarely available in the market.

In Europe and the USA, goat cheese fetches three times the price of normal cow cheese. Goat milk forms a soft cheese with a typically "goaty" flavour, which may not be acceptable in India. But, according to S Singh, a scientist with the National Dairy Research Institute in Karnal, an acceptable cheddar-type cheese could be produced if goat milk is mixed with buffalo milk.

Unlike in the case of cows, there is no religious stigma attached to the slaughter of goats. In fact, about 540,000 tonnes of meat are annually produced in India. Goats' prolific growth -- a female doe produces as many as four kids each year -- and the superior quality of the meat ensure that a high slaughter rate is maintained. At present only a small proportion of the world's goat population is exploited for fibre production, although this represents the most commercial aspect of goat- rearing. In India, cashmere or pashmina is extremely popular: 48 tonnes fetches US $900,000.

India has a 2.67 per cent share in the $40-billion global leather trade, according to T Ramaswami of the Central Leather Research Institute, Madras. This is largely because Indian goat skins fetch a high price in the international market due to their superior quality.


Indian goats have a dry matter feed requirement of 38 million tonnes, as estimated by N K Bhattacharya, director of the Central Institute for Research on Goats. Yet only 20 per cent of this amount is available at the moment. With a minuscule 4.4 per cent of the country's cropped area under fodder cultivation, there is hardly any scope for improving the food situation, adds Bhattacharya.

Given this shortfall, it is very important that the available food is utilised to the maximum extent. Many experts feel that there is a need to move towards intensified food production systems, but Acharya warns that stall-feeding will only be successful when people themselves are involved in planning the programme. Mere exclusion of livestock from grazing lands will not work, he emphasises.

Despite constraints, the goat population in India has been increasing. In Rajasthan, for instance, it increases by almost 10 per cent each year. This is because, as Acharya put it, "goats are the only livestock option there as they alone can thrive in degraded and fragile ecosystems".

But the administration's indifference towards goats continues. Mohan Hirabhai Hiralal, an environmentalist working among the Gond tribals of Ghadchiroli district in Maharashtra, recounts an incident when a senior government official visited his village to persuade the tribals to sell off goats on the plea that the income from the sale could earn a high rate of interest (15 per cent) if deposited in a bank. The tribals pointed out that goats reproduce so quickly that they return in a year almost the entire investment made on them.

Given the importance of this animal for rural India, some thought must be given to make goat-rearing more efficient. As Acharya puts it, "There is no dearth of knowhow in India, but there is a lack of 'do how' and this must change."