The prolonged dry spell and the history of forest fires were clear warnings that went unheeded. And thousands of hectares of forests were charred in the hills of Uttarakhand 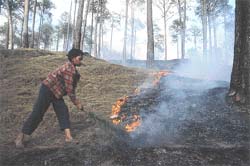 The much-awaited rain arrived too late in the hills of Uttarakhand in Uttar Pradesh. Forest fires had already gutted more than 40,000 hectares of the 3,446,655-hectare forests in the region, mainly affecting pine forests. Three people died and several were injured in fighting fires in the Garhwal region in the first week of May, according to reports. Even by very conservative estimates, the damage is running into crores of rupees. And when the long-term impacts of the fires on the ecology are considered, the cost is incalculable (see chart: Forest fires and ecological destruction ).

"There has been virtually no rain since October 1998 and the heat was extreme. The pine forests were like a bomb. One spark and the whole forest could go up in flames," says Kapil Joshi, divisional forest officer ( dfo ), Kumaon (east). Indeed, that is just what happened. Lok Man S Palni, director of the G B Pant Institute of Himalayan Environment and Development in Kosi, Almora, says the moisture content of the ground this year was even less than two per cent. According to a forest department ( fd ) official, the first fire was reported on March 16. Even after the rains in May, as the people and the authorities were trying to recoup from the scars of the inferno, fires were seen breaking out again in some parts of the hills.
Pine forests are especially vulnerable to forest fires because of the needles that pine trees shed regularly. The needles fall in immense quantities and take extremely long to decompose (about 560 days). They are known as pirul in the local language, and have very little use, being acidic in nature. Yearly removal of pirul can account for 300-350 truckloads per hectare. However, their lack of use makes pirul even a greater menace. It lies like a massive carpet, spreading for many kilometres without a break. All it takes is one spark and there is an inferno.

Although the shedding of the needles take place throughout the year, maximum shedding takes place in April, explains D C Khanduri, deputy inspector general with the Union ministry of environment and forests, New Delhi. The needles keep accumulating every year, becoming a huge pile. fd carries out controlled burning every year to clear the ground of pirul . However, the accumulation continues. And by the fourth year, there is an immense amount of pirul .

"The pirul bed gets as thick as 24 centimetres. And when they are lighted, the fire can be very big," says S P Subudhi, dfo , Almora. According to him, the extremely dry conditions added fuel to the fire, especially as 1999 is the fourth year of the cycle. The previous peak was in 1995, when fires affected 93,000 hectares of forests. If fd and civil authorities are aware of the four-year cycle, why were the fires allowed to get out of hand? "We try to grow forests, but we do not protect them," acknowledges Palni.
Fire in pine forests is an annual feature in Uttarakhand. Two factors are responsible for these fires: natural and human-made. Among the natural reasons, sparks from falling stones and boulders can light a bed of pirul . Another explanation is that there were emissions of natural gas in the region due to the earthquake, which accentuated the fires.

If the fires are 'human-made', who starts them? The answer depends on who you question. "Only in 10 per cent cases did people deliberately set fire to the forests," says Khanduri. However, Kapil Joshi says the role of the natural factors in sparking off the fires was very minimal and that most fires were started by people. Villagers burn the pirul to make way for the grass, he points out. A carpet of pirul prevents regeneration of grass that is used as fodder for cattle.

Villagers also carry the pirul to their fields, where it is spread and set on fire to burn the remaining stems of the harvested crop just before tilling is started again. "This also helps kill a lot of insects in the ground which can be harmful to crops," says Palni. "These fires sometimes get out of hand and spread into the forests as pirul can burn faster than one can douse it," points out Subudhi.

So what do the people from the villages have to say? They blame 'anti-social elements'. Some of the anti-social elements are from what people call the timber mafia and the lisa mafia ( lisa is resin extracted from pine trees). They say the timber mafia cuts trees and sets the stumps on fire to destroy evidence of tree felling. Villagers allege that officials are also involved in this nefarious trade and turn a blind eye to the matter. While M C Ghildiyal, principal chief conservator of forests, Uttarakhand, denies that there is any timber or resin mafia, Khanduri says nobody can rule out illegal felling. Clues to those responsible for the forest fires could lie in identifying whether they are under the jurisdiction of fd or those managed by the civil authorities and panchayats (village councils).
fd says panchayat -managed forests are a menace. "The fires spread from panchayat forests into reserve forests in the process of burning their fields. It is because neither the people nor the civil authorities take any steps to prevent them," says Subudhi. fd claims reserve forests are less affected by the fires.

The civil authorities disagree. "The civil and the panchayat forests are less affected as we have the village panchayats that help put out the fires. Also because we interact with the people directly. This is lacking in the forest department," says Avinash K Sharma, sub-divisional magistrate, Almora. He adds that there are more fires in reserve forests as pirul is not cleared properly, which in the case of panchayat forests is used by villagers.

On their part, the villagers say both the parties are in the wrong. They say the officials appointed by the revenue department to look after the management of civil forests are never seen assisting the villagers. "This is nothing but a war between ifs (Indian Forest Service) and ias (Indian Administrative Services), in which the hill dwellers are trapped," says Lalit Pandey, director of Uttarakhand Paryavaran Siksha Kendra, an Almora-based non-governmental organisation ( ngo ).

Marginalised in this bureaucratic wrangle, the villagers have lost interest in the forests they have managed for generations. "We do not get any timber here and have to get it from Haldwani now. It is the same timber that the timber mafia takes away from here. If we take away a little timber, we are taken in. But people from outside get away with it. Why should the people help put out the fires?" questions Shiv Singh Bisht, a school teacher in Chatkhol village, Nainital.
fd says the villagers' cooperation has been totally absent. But this apathy of the people has valid reasons. All the villagers emphasise a single factor: "Why should any villager go and help put out the fires when the villagers' rights to the forests have been taken away? The forest no longer belongs to us." Says Pandey, "This issue of managing the forests is very important and has been overlooked in policy matters."

The hill dwellers of Uttarakhand used to have rights to forest produce such as fodder and wood for fuel as well as repair of houses. "With a ruling of the Supreme Court ( sc ) in December 1996, the rights of the people to the forest were withdrawn. We pursued the case in favour of the people, and in May 1998, the sc sent directives that 40 per cent of the erstwhile rights should be returned to the people. We are now providing them these rights," says Subudhi.

Not really, say the villagers. "We are getting none of the rights that sc has ordered," says Anand Pandey of Risal village in Almora. He works for Paryavaran Gram, a ngo working in the villages around the Binsar wildlife sanctuary in Almora. The 58-sq km sanctuary has been gutted by fire thrice this year. Laxman Ramaria, a forest guard, says nothing is left: "The whole pine forest has been gutted. Only the oak forest in the core area of the sanctuary is left. Not a single villager came to help the fd . It was declared a sanctuary in 1988, much to the resentment of the 60,000 people living in the 160 surrounding villages.

The villagers say they would not save Binsar. They do not want a sanctuary there. "The people have been cheated in the name of conservation. They do not want any conservation. They want their forests back. There is great hatred among the people for the terms 'environment' and 'conservation'," says Mahesh Joshi, a resident of Risal village, and a member of Paryavaran Gram.
Khanduri says there is no way to stop the fires. Preventive measures include controlled burning by creating firelines and maintaining constant vigil to prevent the fires from spreading. fd does not have any direct fire-fighting apparatus. What it does is 'counter-fighting' by lighting another fire in the opposite direction of the fire so that the two fires meet and die out.

A K Srivastav, member secretary of fire assessment committee constituted by the Union ministry of environment and forests, feels that fd has half the staff it needs for effective fire prevention and control. According to Ghildiyal, Rs eight crore is given on a biannual basis for fire protection. "The amount given now is inadequate. We also do not have resources like helicopters that the developed countries have," says Srivastav.

While officials raise the familiar cry of paucity of resources, the solution may lie elsewhere. "The issue is not inadequacy of resources. It is public participation. If the people can be involved, there can be extensive control of fire. But you have to give them proper rights and economic incentives. The forests are an industry anyway. You have to make it sustainable and people-friendly. It might take some time, but it is a long-term investment" says Palni (see box: Managing their own forests ).

The message is unambiguous: give the people their forests back and let them protect the forests. After all, their lives depend on it. They stand to lose -- and gain -- the most.