Is new land bill up to mark? 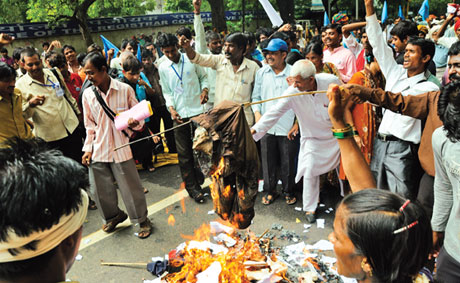 Even as farmers protest land acquisitions across India, the Union Ministry of Rural Development (MoRD) unveiled the draft national land acquisition and rehabilitation and resettlement bill. Released on July 29, the bill promises higher compensation to land owners and incorporates comprehensive rehabilitation package for even the landless people affected by takeovers. The draft has also introduced certain safeguards against forcible land acquisition for private companies.

The MoRD minister, Jairam Ramesh, in his foreword to the draft bill claimed the proposed law seeks to balance the need for facilitating land acquisition for various public purposes with the concerns of farmers and people whose livelihood depends on the land acquired. The bill merges the land acquisition law with rehabilitation and resettlement (R&R) provisions; the UPA government had earlier proposed two separate bills. Ramesh justified the merger, saying resettlement and rehabilitation “necessarily follow land acquisition and that not combining the two laws risks neglect of R&R”. 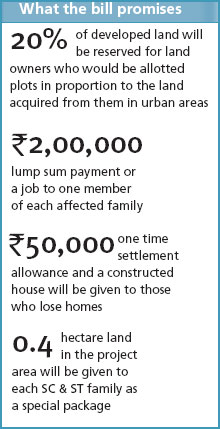 Member of the National Advisory Council (NAC), Harsh Mander, welcomed the bill, saying it incorporates most of the recommendations of NAC. “It is for the first time in India we are recognising that affected persons include the landless who work on the fields,” says Mander. The compensation provisions were decided by NAC after broad discussions. “Our observation was that land is generally registered at one-third the price of market value, and to give a better deal to farmers we proposed a value six times the original market value,” says Mander.

But activists protesting land acquisition are not placated. The National Alliance of People’s Movements (NAPM) says land should be taken only on lease so that the land owners, who may be tribals or farmers, are not alienated from their land and can have a regular income in the form of lease payment. Madhuresh Kumar of NAPM says the bill does not offer a good deal to farmers displaced by irrigation projects. Those displaced by the Narmada project were given 2 hectares (ha); the new bill proposes only 0.4 ha, he says.

The most contentious provision in the draft bill is the one defining “public purpose”. It says public purpose for which land is acquired would include infrastructure and defence projects, industries and urbanisation.

Kumar says the definition of public purpose covers almost everything from building educational institutions to airports to mining, in which private companies are major players. These companies have no public purpose, and acquisition is for profit making, he says. Dharmender Singh, spokesperson of farmers’ organisation Bharatiya Kisan Union (BKU), says that the term public purpose is still not well-defined. “For instance, for the Yamuna Expressway in Uttar Pradesh, the government gave away five land parcels to a developer as payment for constructing the highway. Would you consider this swap as public purpose?” Singh asks (see ‘Road to disaster’, Down To Earth, June 15, 2011).

Mander, also expresses concern over the definition of infrastructure projects which allows land acquisition for housing for “such income groups”. Not defining “such” may allow entry of real estate developers, says Mander.

Industry chambers CII, however, hailed the draft bill for including infrastructure and industry in the public purpose clause. It now wants the clause expanded to empower the state to acquire land even for potential use by private sector-led industrial, commercial and institutional projects.

The draft bill mandates social impact assessment when government proposes acquisition of land over 40.46 ha, which should be conducted in consultation with the gram sabha. It also provides for the appointment of an administrator for rehabilitation.

Both land acquisition and resettlement and rehabilitation provisions of the proposed bill will apply to projects when government acquires land for its own use or on behalf of private companies for stated public purpose, including PPP projects. In case companies directly acquire over 40 ha from land owners, they will be responsible for resettlement and rehabilitation. It also proposes amenities like schools, health centres and civic infrastructure in places where project-affected people are resettled.

The draft bill mandates that 80 per cent project-affected persons must give their consent if government acquires land for use by private companies.

An often misused provision of the existing Land Acquisition Act of 1894 is the urgency cause, invoked by states to acquire land forcibly. The draft bill says the urgency clause should be exercised in the rarest of rare cases like national defence or for resettlement purposes. This means no land acquisition can proceed without public hearing.

Citizens’ groups and non-profits say that the provision of obtaining consent of 80 per cent project-affected people should also apply to government projects as well. NAPM says the draft bill mandates consent only where private sector is involved. It means proposed government projects like the nuclear power project in Jaitapur, dams and airports will not require public consent. What’s more, the draft bill gives legitimacy to government acquiring land for private companies. Till now land was being acquired for private companies in violation of the existing land acquisition Act as seen in the case of POSCO steel project in Odisha, says Kumar.

Mander agrees and says the consent provision should apply to acquisitions for public projects, too.

The shortcomings in the draft bill are likely to figure in the pre-legislative discussions—the last date for sending objections to the draft is August 31. Once the draft is finalised, it would be vetted by the law ministry and then sent to the Union Cabinet for its approval. This process will take some time, which means the bill cannot be introduced this monsoon session ending September 8.
Hide All 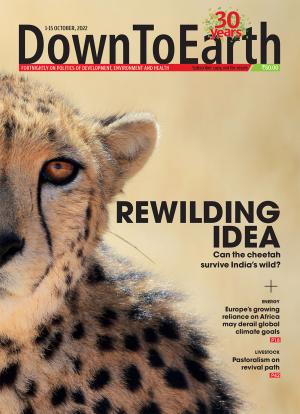