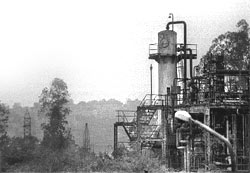 Is it memory that keeps Bhopal alive in our conscience? In 1984, I, Richard, was in class nine. My colleague, Surya, was in class two. Twenty years later, we were on our way to Bhopal, for a 20th 'anniversary' story on the world's worst industrial disaster.

But our homework had revealed two stark facts. First, half a million people exposed to the deadly methyl iso-cyanate (MIC) gas still endure enormous health problems. Although the government's formal count stopped in 1992, they continue to die. Second, the abandoned plant in old Bhopal continues to kill: it has a deadly stockpile of chemicals (around 500 metric tonnes), including one metric tonne of free, hazardous mercury. The 40 workers designated to clear the plant of chemicals had abandoned their work in 1998. Therefore, we had to 'visit' the plant. The proverbial 'twist' existed there.

The state government has posted three police guards to protect the plant -- infamously called the killer factory -- as 'seized evidence'. On the front gate, a warning reads: "Entry with the permission of the collector." Another piece of information we'd collected fell in place. Amazingly, all scientific tests of soil and water samples from the plant were "illegally" done, precisely because the government doesn't allow entry. Six such 'illegal' tests have argued and established that the plant could easily be the most polluting unit in Bhopal. A visit seemed the only way to verify these unbelievable findings.

Bhopal ceased being a memory when, on November 10, we entered the plant -- "Like two school children," Surya would insist later -- across a densely populated J P Nagar. We passed a two-layer security check. The collector had told us we could go right in. His kindness helped us bypass the stringently formal procedure. A high level official escorted us to the plant. He left us with a local doctor who, out of respect for our 'source of reference', left us with the guard to roam around.

The plant belies the fact the tragedy happened 19 years ago. Rusted signs, walls with paint peeling off, broken windows, bolted doors. Every symbol of human existence is encrusted in memory-benumbing thick foliage. Beyond that, the factory still reeks of chemicals. The control room still has that casual emergency instruction left untouched since December 2, 1984. The rotting machinery oozes poisons. Of course, all signs of corporate presence are effaced.

In the storage area, tons of unidentified chemicals lie in the open. There are three such facilities, piled with stock. The bored guard shows us dry white channels. He informs the pile is shrinking; it mixes in rainwater run-off, and flows away. The guard takes us to another storehouse. This one is huge. Four tennis courts would easily fit in. More chemicals, and the now unmistakable stench of ammonia, signalling rot.

Only a part of the rainwater laced with chemicals reaches the plant's effluent pond. The rest seeps into the ground, or into the nearby residential areas. "Will I get sick if drink the water?" asks the guard, who uses a well inside the plant. Since his posting in the plant last July, he has had severe stomach problems and frequent crippling headaches. Residents of nearby Asaf Nagar have similar complaints.

The main plant is a jumble of rusted pipes, tanks, chimneys, and pumps. Huge quantities of chemical reactants left inside meters of pipes and reactors have spread throughout the premise. We are informed that in 1998 some disposal was done, but the chemicals were again dumped inside the plant. The greenery is very deceptive. Scratch it and you get chemicals. In at least three places we found huge dumps, again unidentified. The naked eye tells us the premise has more chemicals than soil.

The control room seems frozen in time. There is no machine hum. We hear sounds: the confusion, the shouts, the cries, the stomp of hurrying feet, the scuffles, people escaping as quickly as they could, throwing off their helmets, leaving what they couldn't take. At the center of a bank of dials, one stands out. It is the dial showing the pressure in MIC tank no 610.

As we come out of the plant, we face living J P Nagar, worst affected in 1984, still reeling in illness. No, memory can't be the only reason for another story. Because Bhopal lives with the plant, in the present continuous: still taking toll.