A plantation economy, land grabbing and migrations from neighbouring states have forced Gudalur's tribals into destitution 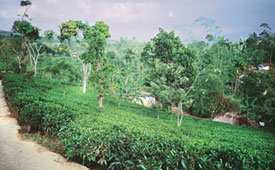 But by 1997, as per a People's Union of Civil Liberties' survey, the company had increased the plantation area to 1,486 ha. Similarly, Tea Estates India increased its cultivated area by more than 950 ha between 1977 and 1997. Forest officials turned a blind eye to such contraventions. According to Siddhartha Krishnan, who has worked extensively on Gudalur, "The common retort of foresters that the estates were only developing their patta lands suggests an ignorance of boundaries."

The interim stay order ended in 1997. Court arguments dragged on until 1999, when the nine parties jointly withdrew their petitions. The Tamil Nadu government, however, does not deem it right to act against the planters.


Following the Janmom Act, 5,581 'encroachments' in 2,384 ha of non- janmom land were regularised: migrants who had moved into Gudalur in the 1950s and early 1960s now had land deeds. But the Act emboldened many to occupy forest tracts. Even as settlement proceedings were initiated to regularise pre-1969 encroachments, farmers from neighbouring Nilambur and Wyanad districts of Kerala began occupying forests in Gudalur, to the detriment of the taluka's tribals.

One must, however, distinguish between two types of occupants: the small encroachers and the land grabbers. The former were typically poor families who took over areas for direct cultivation or for their residence. These occupants took only a few acres. According to Selvaraj of the Vivasayigal Thozhilalargal Munnetra Sangam, a local and dalit rights organisation, there could be about 50,000 of such encroachers -- a majority of them dalit landless families.

In addition, Sri Lankan Tamils, repatriated into the country following the Lal Bahadur Shastri-Srimavo Bandarnaike Pact of 1963, were often duped into buying small plots of land and were given fake documents. There are around 300,000 repatriates in Gudalur. Says one of them, S Kandasamy, "We were settled here by the Tamil Nadu government. It's not right to call us encroachers." Kandasamy is a plantation worker like many other repatriates. "We used to work in tea plantations in Dambula, Sri Lanka. It's good that we found work in plantation areas," he says.

Such livelihood imperatives were hardly the concern of land grabbers. In contrast to the small encroachers, the grabbers took much larger areas, primarily for estate purposes. Typically, areas 'grabbed' could range from 10 ha to 400 ha, even 2000 ha. Characteristically, the grabbers were able to get assistance of lawyers, officials and politicians to produce official documents to substantiate their claim over the lands grabbed, unlike the small encroachers.


The state government was not totally impervious to encroachments. In 1978, it started an eviction drive. The move, however, ended in just four days, after Louis, a farmer who had occupied lands in 1972, immolated himself in front of the revenue divisional office of Gudalur. A public funeral, protest and political support even ensured a visit by the then Tamil Nadu chief minister, M G Ramachandran.

Evictions resumed in 1981. The state government amended the Tamil Nadu Forest Act, 1882, and provided for summary eviction of occupants in reserved forests. Even as protests assumed political hues, more than 700 families occupying nearly 600 ha in erstwhile janmom and non- janmom lands were evicted. But Tamil Nadu had to bring the operations to a halt again, following a stay order of the Supreme Court. The order was in response to a public interest litigation filed by three Gudalur farmers. The Tamil Nadu government was instructed to exercise restraint in evicting settlers. In 1988, the court also suggested that the state government grant title deeds to occupants of the reserved forests. But the state did not pay much heed to the apex court's suggestion.


The forests surrounding Gudalur are extremely valuable, primarily because of a large number of rosewood and teak trees. These trees can fetch several lakh rupees in the open market. Further, once forests are cleared, the land is fertile and can be used for tea and coffee estates. An undeveloped acre of land in Gudalur would sell for an estimated Rs one lakh, while an acre planted with tea would go for Rs 4 lakh or more.

It's not surprising, therefore, that encroachments more than doubled between 1991 and 2002. This coincided with a tea and spice boom, increase in land speculation and timber poaching. The forest and revenue departments did not intervene in the real estate enterprise. Says Krishnan, "Encroachments manifested as livelihood exigencies till the mid-1980s. They then took the form of a quasi-legal enterprise founded on possession -- rather than proprietorship."

Encroacher farmers have preempted evictions by filing writs in district court or the Madras High Court. Many encroachers of janmom lands possess fabricated documents -- ostensibly pre-1969 agreements with the janmies. According to Krishnan, lower courts in Gudalur and Ooty have been liberal in admitting land-related litigation on the basis of fabricated evidence. More frequently, possession is granted on the basis of admissible evidence of inhabitation and cultivation.

Encroachment also reflects corruption. Krishnan notes that some state counsels do not even appear in court during encroachment related court cases, resulting in interested parties gaining legal hold over the encroached land.


"The only form of cultivation we know is poddu (shifting cultivation). We do not know how to cultivate tea. Besides, who would allow us to work in tea estates," says Bairam, an Irula from O'valley, adjacent to Gudalur. It hasn't helped that the fate of tribals like him is now linked to the Godavarman Case, 1995 -- that overarching case under which the Supreme Court deals with forest-related litigation.

Thirumalapad Godavarman, himself from the Nilambur Kovilagam family, was moved to file the case after he found large tracts of forests in his ancestral estate degraded. But he had precious little to say about encroachment by planters and land grabbers. Tribals, however, were a different kettle of fish for the Nilambur Kovilagam scion. According to his lawyer, Jacob Mathew, "The tribals cannot live with their land. There is no point giving land to them."

Selvaraj counters this slandering aptly. "It was the janmies who destroyed the forests by converting them to tea plantations. Now their descendant (Godavarman) has gone to the apex court, pretending to be the saviour of forests. But the ensuing litigation has almost paved the way for the destruction of forests by keeping them out of bounds for tribals."


As an example, Selvaraj cites the case of Mudumalai sanctuary. Located about 16 km from Gudalur, Mudumalai was notified a sanctuary in 1940 by the colonial government. Says Chandran, a guard at the sanctuary, "The tribals have been safeguarding the forests since long. We consult them regularly, particularly when certain wild animals run amok." But the forest department now deems it right to keep the tribals out of Mudumalai. "Our ancestors had the rights to collect forest produce. The sanctuary was created with our help. But now we are seen as enemies of conservation. That's the reason we aren't allowed into the sanctuary to collect minor forest produce. Why doesn't the government understand our needs? We need the forests to survive, to preserve our culture," says Badasi of the Kurumba tribe.

"We have been denied our rights following some Supreme Court order, which we scarcely understand," she continues. Madhu, a Kattunayaka tribal who lives in the vicinity of the sanctuary, adds, "We don't have any land, but workers who came here to work for hydroelectric projects encroached into the forestlands. The forest department has not acted against them." The forest department concedes that there is a problem here. Says B Venkataswamy, forest conservation officer of Nilgiris, "We admit there are encroachments by workers who came to work for the Pykara Ultimate Stage Hydroelectric Project. But we can do precious little. These encroachers have active support of political parties."

The primitive tribals of Gudalur have also to contend with the Badagas. The community numbers about 300,000 in the Nilgiris, and controls 10 panchayats The Badagas now claim Scheduled Tribe status. Says Bellie, a leader of the community, "We want to be deemed a Scheduled Tribe, just as the Irulas, Mullu Kurumbas and Kattunayakas. We have given our proposals to many of the officials including those from the Union government." But Jakko Parthasarathy rubbishes the claims of the Badagas: "The Badagas are immigrants from Mysore (Karnataka). Today they are aptly recognised as Backward Castes."

The Badaga assertion has compounded the problems of Gudalur's primitive tribes. Says Pasuvan, an Irula tribal from the Pokkapuram hamlet: "We have already lost much of our lands to the Badagas. And that's not all. In Pokkapuram panchayat we have to cross nearly 50 km of mountainous tract to be heard in the local body. But even then our voices are not heard, since the Badagas dominate the panchayats. Our ancestors sheltered this community when Tipu Sultan drove them out of Mysore in the 18th century. They settled here and copied our culture. Now they dominate us."

B G Krishnan, senior advocate and a spearhead of the Save Nilgiris campaign -- a 15-year old movement to protect the region's ecology -- puts the tribal problem in perspective. "The problem is that no area in Tamil Nadu has been declared a Scheduled Area. Extending the P anchayats (Extension to Scheduled Areas) Act, 1996, would be an excellent step towards recognising adivasis' rights."

Other experts note that rampant plantation and the denudation of forests has affected rainfall in Gudalur. Once known as the second Cherrapunjee, Devalaya in the taluka now receives an annual rainfall of around 2,000 millimetres (ml) -- it received nearly 5,000 ml in 1994.

Says, BG Krishnan, "The government should recognise that the tribals have safeguarded forests for centuries. Conservation of forests has to go in tandem with safeguarding their livelihoods."