Ganga plumbs new depths in its journey through Varanasi 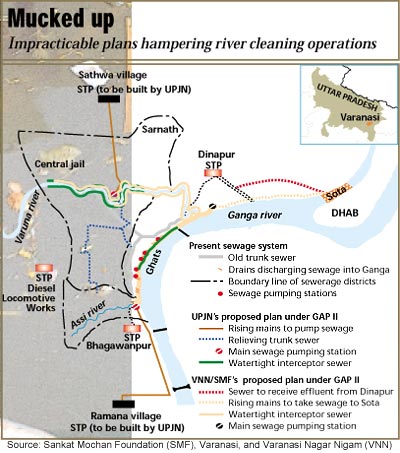 On April 29, the British High Commission donated Rs 13 lakh to non-governmental organisation (NGO) Sankat Mochan Foundation (SMF) to clean up a few ghats along Ganga river in Varanasi. Past experience in this holy city of Uttar Pradesh (UP), however, suggests that the money could end up going down the drain. For, despite crores of rupees being sunk into the Ganga Action Plan (GAP) since it was implemented in Varanasi in 1985, the river and its environs remain polluted. Kedarnath, a local boatman, aptly describes the current state of affairs: " Many have learnt to do brisk business at the cost of the river. There has never been any dearth of money. What is lacking is the commitment to utilise the funds judiciously."
With a population of about 1.5 million people, Varanasi is one of the oldest living cities of the world. Ironically, several of the problems pertaining to the Ganga's stretch along Varanasi stem from the city's religious significance. For one, it hosts a floating population (comprising tourists) of around two lakh people every day. For another, more than 60,000 pilgrims take a dip in the river daily. Many of the ghats (steps leading to the river) also serve as laundries.

Then there are the corpses. As per religious belief, people can attain spiritual liberation if their last rites are performed in Varanasi. About 40,000 bodies are cremated in just two ghats of the city every year, generating 15,000 tonnes of ash per month. Worse, several corpses are dropped straightaway into the river.

The November 2003 data of the Central Pollution Control Board (CPCB) highlights the seriousness of the situation. According to it, the maximum probable faecal coliform level in the river downstream of Varanasi was 5,000 per 100 millilitres (ml). The World Health Organization's permissible limit of coliform for class B water (which can only be used for bathing) is 500 per 100 ml. R K Singh, regional officer, UP Pollution Control Board, Varanasi, washes his hands of the issue, saying: "The pollution has increased. But our job is just to monitor." Ironically, officials of UP Jal Nigam (UPJN), the state-level implementing agency of GAP, maintain that the programme is successful. "The pollution has reduced," claims D S Varshney, general manager, Ganga Pollution Prevention Unit, UPJN, Varanasi.

It is noteworthy that under the first phase of GAP, the UPJN only took into account parameters such as biological oxygen demand and dissolved oxygen. SMF president Veer Bhadra Mishra feels that the exclusion of faecal coliform was a big mistake, as domestic sewage (upwards of 250 million litres per day) is responsible for more than 90 per cent of pollution in this part of the river. But Varshney differs: "The amount of sewage generated is irrelevant. Rather, the infrastructure created under GAP I should be the criterion to judge the plan's success, and this is functioning satisfactorily."
Sadly, Varshney's claims about the infrastructure ring a little hollow. Between 1986-1993, six pumping stations were constructed under GAP I along the 84 ghats to intercept and divert sewage. Three sewage treatment plants (STPs) were also set up. The total expenditure incurred was Rs 49.55 crore. But the acute power shortage has rendered the pumping stations non-functional, and most of the city's sewage is still dumped untreated into the river. Further, the two crematoriums constructed under GAP are out of order.

Despite such inadequacies in GAP I, the UPJN has evolved a similar scheme for GAP II (see map: Mucked up). It proposes to treat sewage by upgrading the present system. It is also planning to lay a relieving trunk sewer. The capital cost of the venture is estimated to be Rs 234 crore.

However, officials of Varanasi Nagar Nigam (VNN), the city's civic body, have shot down the proposal. In December 1993, they asked the SMF to prepare an alternative plan. SMF suggested that watertight interceptors be laid along the ghats. These would work on the principle of gravity, and will not require electricity to function. Downstream of Varanasi in Sota, sewage will be treated in advanced integrated oxidation ponds with the help of bacteria and algae. The capital cost of the project will be Rs 150 crore.

Experts are of the opinion that both schemes are peppered with flaws. "The UPJN plan will encounter the same problems that it did in GAP I. Electricity would still not be ensured," says Mukesh Khare, associate professor, Indian Institute of Technology (IIT), Delhi. R C Trivedi, additional director, CPCB, points out that under VNN/SMF's project, ponds will be located in a flood-prone area. The system will, therefore, become non-functional during the monsoon.

Which then would be the most suitable plan? Hopes are being pinned on an ongoing court case to resolve the matter.


In 1997, the VNN filed a public interest litigation petition in the Allahabad High Court (HC). It contended that sewage management was a municipality's prerogative. The matter reached the Supreme Court, which ordered in 2003 that the HC must hear all issues involved before taking a decision.

Even as the case continues, the National River Conservation Directorate (NRCD) -- the Union government's nodal implementing authority -- has granted funds to commence GAP II in accordance with UPJN's plan. To add to the confusion, the Union government has commissioned a Japanese engineering consultancy to prepare a master plan to deal with Varanasi's liquid waste. But before the plan gets finalised, it will have to be approved by various agencies such as the VNN and UPJN. "If any of these authorities does not give the green light, it will be back to square one," avers an NRCD official.


While the scenario stays unclear, the condition of the Ganga continues to deteriorate. "Public pressure can be applied. But in a city where religion is business, who will generate awareness?" asks S C Sharma of Jnana Pravaha, a Varanasi-based NGO. In this regard, organisations like the SMF can play a key role. Currently, SMF is involved in river monitoring, ghat beautification, and removing litter from the river. Occasionally, it conducts workshops for students. But SMF is hamstrung since it is considered more of a religious body than an NGO. Although Mishra is a hydraulics engineer, he is the mahant (head) of the city's second largest temple as well. "Such organisations raise the issue of the Ganga only to get funds. In terms of real work, they do very less," alleges P B Rana of Banaras Hindu University.

When asked why the SMF was not playing a proactive role in generating public awareness, Mishra replied: " SMF is already working beyond its capacity, and is strapped for cash. As for the fate of the river, if the Berlin wall can come down, the Ganga can also be cleaned up." Government agencies, too, cite similar alibis. "Funds are needed to sensitise the people," says Varanasi mayor Amar Nath Yadav. Vrinda Dar of Kautilya Society, a local NGO, feels the people themselves will have to realise that the river is the city's lifeline. "Or else, the wake-up call could be an epidemic akin to the Surat plague," she warns.