The flow's not smooth 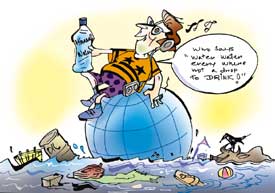 The second edition of the World Water Development Report, Water, A Shared Responsibility was released in Mexico on March 22, 2006, the World Water Day. Published by the unesco on behalf of the World Water Assessment Programme -- a body that coordinates activities of un agencies that deal with freshwater resources -- the report is a assessment of global freshwater resources. With 17 case studies from 41 countries, the report has a much broader canvas than its first edition, which published in 2003, edition drew from 12 countries.

"Governance systems will determine who gets what water, when and how, and decide who has the right to water and related services," the report's authors note. This will take a lot of doing if their findings are anything to go by. Sample this: currently 1.1 billion people lack sufficient access to safe drinking water, and 2.6 billion are deprived of basic sanitation. Clean water has almost become the preserve of the rich. A family residing in a slum has to make do with 5-10 litres in a day (lpd), while a middle income -- or an high-income -- household in the same city guzzles of 50-150 lpd, the report notes. The authors apprehend that this inequity might sharpen in the next two decades with more than two-thirds of the world's population expected to live in urban areas, a large number of them in squatter settlements.

Increasing demand for food will also test skills of water managers. With the world's food requirement estimated to increase by 55 per cent in 2030, the already strained irrigation resources will be under enormous pressure. "Our ability to meet this demand hinges on good governance," the report states.
Mismanagement, corruption, lack of appropriate institutions, bureaucratic inertia and a paucity of investments in human and physical resources mar water management today. The report lays much store on giving consumers easy access to information on water quality and quantity. Most countries were found wanting on that score: detailed information on drinking and surface water quality was difficult to obtain in all but two of the pilot countries: the us and South Africa.

More than us $1 trillion are paid in bribes each year world over for water-related services (see box: Corrupt Indian water officials). The report, however, notes with satisfaction that anti-corruption measures are now seen as critical to equitable and sustainable development. But that's amongst the few positives. The authors criticise the current practice of trying to increase supplies by investing in physical infrastructure. Funding policies also draw flak. In 2000-01, countries where less than 60 per cent population have access to improved water source received just 12 per cent of total aid. Such skewed disbursal, believe the authors, expose domestic decision-makers in low-income countries to machinations of international lending institutes.

The report notes "it would be a mistake" to write off the private sector. This is contradictory to the finding that "...those who have benefited from private water services in developing countries are predominantly those living in relatively affluent urban pockets".

The report offers no solutions. Merely warnings, but ones we should do well to heed. To sum up, the report's agenda is "having sufficient water, the right quality, at the right place and at the right time." How this is achieved will depend on governance models.