Home |
Indepth
| What the blazes!

Is it the hand of God, or the soiled hand of man? The buck is being passed even as flames stretching hundreds and hundreds of kilometres threaten lives, livestock and forests the world over, … 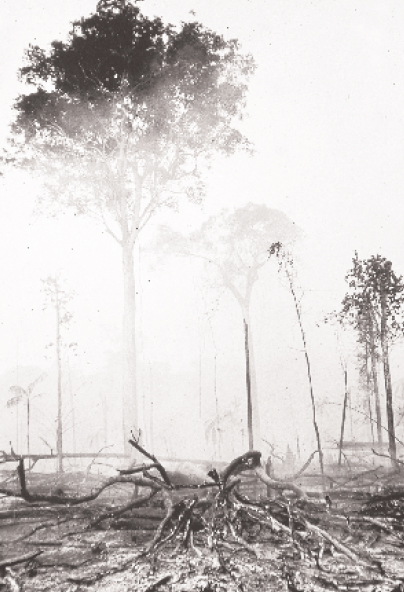 CHARRED black smouldering ground has replaced the lush dense rain forests of Roraima, Brazil’s northernmost province where flames lit half a year ago have devastated nearly 25 per cent of the province. But it was the power of nature in the form of rains, which finally stopped the fires. In all the 1,500 fire-fighters from Brazil, Argentina and Venezuela, had merely been fighting a losing battle against the blaze to save the reserves of the native Yanomami Indians. The fires are estimated to have devoured some 12,000 head of cattle, almost 400 are dying daily, and destroyed practically all crops, except the irrigated rice.

While the true effects of the fires are not immediately known, officials at the Institute of Amazon Research (INPA) in Brazil are of the opinion that the fires will lead to changes in the natural seed banks in the undergrowth and may even destroy them. They have also dried up the natural water reserves. Researchers at INPA also feel that the fires have made the region more susceptible to fire outbreaks by destroying the secondary layers of green cover in the forests.

The blaze produced a lot of dry material which is extremely inflammable, mainly in the summer if the soil is not dampened by heavy rainfall. This effect is increased by logging efforts as studies undertaken near the cities of Tailandia and Paragominas in Para, a state neighbouring Roraima have proven. Meanwhile the Amazon Task Force, an umbrella environmental organisation of grassroots and environment workers in Brazil, has claimed that the flames have by now emitted 125 million tonnes of carbon into the atmosphere.

The population of Roraima is suffering from the effects of this holocaust. As in the case of Indonesia last year children have become a major casualty. Over 200 reporting everyday to the hospital with respiratory ailments. In the Yanomami area media reports state that entire communities have had to migrate in search of water as their streams and rivers have dried up, others survive on water from hastily dug wells. Malaria has increased significantly, and patients cannot be removed to hospital because of the smoke induced bad flying conditions.

Rise in cases of malnutrition, respiratory diseases and malaria is now expected. The fires have exposed the lack of preparation for forest firefighting and the absence of a special task force or equipment anywhere in the Brazilian Amazon. Even the army and the air force which have many bases, planes, helicopters and battalions in Roraima, do not have any firefighting equipment or trained personnel. “People want to treat this like a natural disaster, like an earthquake or tidal wave, where nothing can be done. But it’s not just El Nino, there are economic and social factors that also have an impact,” says Philip Fearnside, a scientist at the National Institute for Amazon Research in the jungle city of Manaus.

Only when the fires hit the international media in a big way did the government take action. Friends of the Earth (FOE) accused the Brazilian government of failing to respond to offers of assistance from the Disaster Relief Branch of the United Nation’s Environment Programme (UNEP). The UNEP offer was to send a small team of specialists to Roraima to elaborate an emergency plan, which would include the use of the technologies used in Indonesia. It took the Brazilian government four long months to accept the UNEP offer.

The acceptance provoked a strong reaction from military leaders. General Luis Gonzaga Lessa, military commander of the Amazon, went on record to say that international aid was unwelcome, because it meant foreign interference. General Luiz Edmundo Carvalho, commander of the First Jungle Brigade, said that left to itself the Amazon Military Command could offer all the help needed. This spurred President Fernando Henrique Cardoso to call a special meeting of the Foreign Affairs and National Defence Council to discuss the situation in Roraima on March 26, 1998.

It was finally decided to accept a US $5 million World Bank loan for fighting the fire and set up a task force under General Carvalho to coordinate all activities in Roraima. Significantly, according to a newspaper report, it was also decided to begin a campaign to change international opinion that Brazil is unconcerned about the fate of the Amazon jungles. Governmental corruption, illegal logging, and the burning of thousands of hectares for quick profit, all too apparent in Brazil, is a global phenomenon. According to the Washington based World Watch Institute (WWI) the fires raging in Indonesia and Brazil are symptoms of this global trend of accelerating forest loss. “Half the forests that once covered the Earth are gone, and deforestation has been accelerating the last 30 years,” says Janet Abramovitz, a senior WWI researcher.

Between 1980 and 1995 at least 200 million hectares of forests vanished — an area larger than Mexico. Government policies and subsidies encourage the large-scale forest exploitation and infrastructure developments in forested areas says Abramovitz. “Subsidies for below-cost logging, road building, and infrastructure are so large that governments are essentially paying businessmen to take the timber and convert the land to other uses,” she adds. Indonesia’s timber subsidies cost the government US $2.5 billion in lost revenues in 1990, according to the Abramovitz report. In the United States, timber sales from national forests lost over one billion dollars from 1992 to 1994, because of subsidies.

In Russia, according to the WWI, 12 million hectares are illegally logged each year, compared to only two million hectares of legal logging. Timber corporations also have very close links with the seat of power in most nations. A factory for example took precedence over reforestation in Indonesia when President Suharto diverted money from the nation’s reforestation fund to build a paper factory for his personal friend and “timber king” Bob Hasan. Hasan is also a member of the Suharto cabinet. Auditors of the International Monetary Fund were amazed to find that money to fight the devastating forest fires had been skilfully steered towards Suharto’s son’s failing car company.

In Cambodia, the prime ministers and the military illegally control the forests and the timber trade. Abramovitz claims that since 1970, the international trade in forest products has tripled to US $142 billion and a large part of the illegal trade goes unreported. Prior to the collapse of the Asian tiger economies, demand in Asia had been growing faster than anywhere else with growth rates in the consumption of wood panels more than three times the world average. Having depleted their domestic forests, many Asian timber companies are now moving elsewhere. The area of Amazon forest under lease to Asian companies quadrupled in 1996 to more than 12 million hectares, according to Abramovitz. A more shocking example is that a Malaysian company controls over 60 per cent of the timber trade in Papua new Guinea