Will the deserts retreat?

Home |
Indepth
| Will the deserts retreat?

The first conference of parties for the Convention to Combat Desertification held in Rome took some important decisions to save the parts of the Earth that face increasing desertification. But … 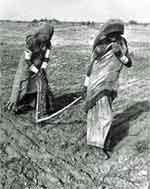 the first Conference of Parties for the Convention to Combat Desertification ( cop-i ) held in Rome from September 29 to October 10, 1997 took decisions on issues such as funding and the venue for a permanent secretariat for the convention. With no additional resources coming from nations of the North, the decisions on how to structure funding for the convention became a foregone conclusion. The proposal for a "global mechanism" ( gm ) -- a body that would mobilise and channelise resources into the convention -- was formally adopted.

An arrangement has been worked out between the World Bank, the United Nations Development Program ( undp ) and the International Fund for Agricultural Development ( ifad ) to mobilise resources for the convention. The Global Environmental Facility ( gef , which provides funds for programmes under the four priority areas of biodiversity, climate, international waters and ozone) would be funding the anti-desertification programmes. This means that all projects under the anti-desertification convention would have to show benefits under one of the four listed priority areas under the gef .

After hectic lobbying by the undp and ifad -- both of whom had submitted proposals to house the gm -- the decision went in the favour of ifad . But the issue of housing the convention was so highly politicised that the chairperson Mohamed Mahmoud Ould El Ghaouth, while announcing the decision, said, "I cannot remain silent on the attitude of some international civil servants. They gave the impression that they can muster more resources if voted by the conference. This is deplorable." Three countries -- Canada, Spain and Germany -- also lobbied to house the permanent secretariat by throwing official parties to promote their cities. The city of Bonn, which also houses the climate convention, was finally voted as the permanent secretariat. African nations also lobbied to hold the next cop in Africa. Although the dates were not finalised, Dakar, the capital of Senegal, was selected as the venue for the next cop .

Bureau members for Committee on Science and Technology ( cst ), a scientific body to assist the cop , were also elected. Cuba was selected as the chair of the cst . Each time the cst meets, there would not only be a plenary session but also a special meeting on a particular subject which will be dealt in detail. The cst , which would meet only during the next cop , would concentrate on traditional knowledge systems. In the meantime, cst would conduct a survey of existing networks and scientific organisations combating desertification.

The United Nations Environment Program ( unep ) will conduct such a survey on its behalf. An ad hoc panel consisting of experts was set up to work on benchmarks and indicators, a mechanism which will show the successes and failures of the convention. Drama erupted on this decision as well, with African nations demanding that at least five seats be reserved for Africa since the convention gives priority to the continent. Finally, a consensus was built up to give three seats to Africa, one to Eastern Europe, two each to Asia and Latin America with two seats being shared by the rest of the world.
Although about 115 nations have ratified it, the convention is yet to be ratified by the us . "Basically, they are not interested in the issue. They do not see any benefit for themselves by ratifying the convention, but on the other hand, they see the costs," explained Michael Brown, a delegate from the World Learning Incorporation, a us non-governmental organisation ( ngo) . "The Republicans who control the us Senate would never ratify it," he added. With the governments from the North not willing to contribute specific funds for the convention, nations of the North are following double standards, felt some delegates from ngo s in the North. Eric E Van Monchoven represents the Italian ngo cocis . "They just want to show that they consider the interests of the poor. They say something but do something else," he lamented.

Unfortunately, there has not been any pressure from Western ngo s on their governments to take the issue of desertification seriously. Like the official delegates from the North, their ngo counterparts have also desisted from taking up campaigns against desertification. ngo giants such as Greenpeace International, who make their presence felt in other conventions, were not represented at the convention. Similarly, the Friends of Earth International ( f o ei ) do not have any international campaign on desertification issues. Benno Pilardeaux works with the German Advisory Council on Global Change, a non-profit organisation, and was a part of the German delegation. "Most Western ngo s only look at environmental issues. Only a tiny number looks at environment and development as interlinked issues," he pointed out. "Greenpeace and other ngo s would find it more difficult to raise funds through discussion on land degradation. It is difficult to raise money to run such campaigns. It is easier to raise funds by raising issues such as hole in the ozone layer or the killing of sharks." The convention thus remains a neglected child of the Western world -- both the governments and the ngo s.


The Convention would have had to function without a budget had it not been for the sheer persistence, determination and firm handling on the part of El Ghaouth, chairperson of the Committee of the Whole ( cow , the highest body of the convention that ratifies all the decisions). He almost forced all the parties to come to a decision on the last day of the conference. El Ghaouth created a great degree of commotion when he said: "The convention is being reduced to a second-class convention." Blunt as it may have sounded, his statement summed up the convention in the best possible way.

J Hoogeveen of The Netherlands argued on behalf of the eu that although a total figure of us $6.1 million was agreed upon, there was no agreement on the breakup of the various elements of the budget. He insisted on the passing of the budget without the breakup figures. A Tanzanian representative, who is also the spokesperson for the g-77 , also joined hands with the Dutch representative since the amount allocated to the gm was only around us $0.5 million of the total budget. Dissenting with these views, El Ghaouth said that the governments were reopening the issue after a consensus. "Without figures, it will have a catastrophic effect on the convention. We are leading the convention into a hole. It is indeed the practice in all conventions that the parties adopt a figure and permit the secretariat to allocate that figure to various element categories," he explained.

As the battle of words continued, the Dutch representative at one point of time went on to accuse the chair of blocking the consensus and not letting the budget to be passed without any reference to the breakup. The Tanzanian representative, in the meantime, suggested another breakup of the budget. Hama Arba Diallo, the executive secretary to the convention, said he could not function with the suggested breakup. The Dutch representative suggested that the executive secretary should not give his opinion, as the matter was being discussed at the intergovernmental level. He insisted that the budget figure should be adopted without a breakup.

With no consensus in sight and debate being reduced to accusations, Al Ghaouth intervened. "I see the borders of civil behaviour being crossed, and if necessary, would even expel any representative," he threatened. "This is the first time that a plenary session has been downgraded," he commented angrily. Several nations such as Senegal, Swaziland, Antigua and Barbuda, which were quiet till this point, joined hands with the chair and said that the positions of the Dutch and the Tanzanian representative were not acceptable. They even suggested the Tanzanian representative speak for himself and not on the behalf of the g -77. Finally, the proposed breakup by the chair was accepted with the provision for revision in the next cop . But not before almost three hours of continuous, heated debate with the gm getting about us $ 1 million.


About 60 ngo s attended the conference. Working within the established framework, they failed to influence the negotiations in any creative or radical manner. While the official delegates worked on the nitty-gritty details of the working of gm , the only suggestion that the ngo s made was to include the ngo s in any consultative body set up for functioning of the gm or on the roster of independent experts which could be called upon by the cop or the cst to assist on scientific issues. A major preoccupation of several ngo s was "how ngo involvement should be worded in the text". This revealed their narrow self interests without showing much intellectual initiative on the issue of raising funds for the Earth's poor, or the actual scientific issues involved in ensuring that the convention becomes a reality.

There was, very clearly, a divide in thinking on the issue of "community empowerment" within the ngo s. Some ngo s even felt threatened by any reference to community empowerment or financial powers being given to local communities. This came out in several ways. "Let us decide what to do with our future. We don't want donors and others to tell us what to do. Communities should be empowered to take up programmes," said Souleymane Masamakan, the national coordinator for ngo s from Mali, who belongs to a local tribe. Michael Brown, a ngo representative from the us said, "What does it mean? Does it mean that 20 years from now, communities would be negotiating with donors themselves? Both top down and bottom up approaches have failed everywhere. We need to follow a middle approach." Most of the assembled ngo s were comfortable with the idea of involving "all stakeholders" -- governments, donors, ngo s and community representatives -- in the decision-making processes or programme formulation and implementation, rather than empowering of communities to take their own decisions.

The divide between these perspectives was obvious in all the ngo meetings. Organisations that believe in community empowerment found themselves cornered by the conflicting interests of various parties. This also had to do with the fact that several ngo s from the South came with a clear agenda of raising funds for their activities and were not very keen to offend the donor community or even their own governments. Consequently, the ngo s participating in cop-i did not play the role of providing any critical alternative perspectives or leadership.