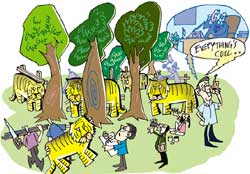 When it comes to saving biodiversity, India leaves no stones unturned to present a positive image at international forums like the Convention on Biological Diversity (cbd). India protects its biodiverse areas and maintains sanctuaries and national parks. It makes extensive 10-year management plans for each protected area and implements them in each of the 595 protected areas. It has a huge staff, a body of trained officials along with specialised courses for wildlife protection. There may be instances of decline of the tiger population at a particular park, but to India's advantage, the other member countries of cbd are so resource poor that cannot make a similar impression.

This year at the cbd's eighth Conference of Parties (cop 8) things should not be any different for India. It should be easy for the country to claim it has done much on the Programme of Work on protected areas that cbd had adopted in the cop 7. The purpose of the Programme of Work on Protected Areas is to establish by 2010 for terrestrial areas and by 2012 for marine ones, a comprehensive, effectively managed, and ecologically representative national and regional system of protected areas. India's experience, like any other developing country with megadiversity, indicates that creating a protected area is like opening another battlefront between people and conservation.


But India's claims are filled with contradictions. On one hand, it claims the existing protected areas network "ensure(s) appropriate representation of a range of biological values spread across the ten biogeographic zones and twenty-six biogeographic provinces in the country. It claims that the Draft National Environment Policy 2004 envisages expansion of the network to represent all biogeographical zones. The Wildlife Action Plan (2002-2006) also calls for expansion of protected areas network." On the other hand, there is the excuse that creating them results in troubles in the hinterland: "Unfortunately, the process of rehabilitation has not been fully completed due to a variety of social, economic, political, administrative and financial reasons and thus several protected areas have not been legally gazetted to date," says the plan.

Lack of finances is a ready excuse for conflict-ridden places. The plan claims: "The country presently has no sustainable financing plans that support national systems of pas." In its third draft report on compliance with cbd requirements it drops a bombshell saying, "The need is being felt to develop these plans and to develop public-private partnerships for effective protected areas management." No one, however, has ever heard of a private partnership in managing protected areas, although there have been occasional murmurs of maverick businessmen wanting to take over some high-profile parks but there has been no public consensus on the issue yet.

One could partly blame the environmetal watchdog ngos in India for letting the Ministry of Environment and forest (moef) off the hook too often on the issue of protected areas.


cop 7's programme of work for protected areas has set an agenda that India is bound to follow, as cbd is an enforceable treaty. India has to create more terrestrial protected areas in the next four years. Unfortunately, cbd's programme is not as strong when it comes to dictating what kind of protected areas India should create. It does suggest that India follow the iucn (World Conservation Union) guidelines for protected area management categories where the iucn lists a category of strict reserves as well as one for zones of sustainable use. The guidelines do not explicitly say that one is more important than the other (though critics say iucn's inclination for the strict reserves is in-built in its psyche). moef has only paid lip service to the guidelines. In 2003, it created a loophole-riddled legislation for protected areas where sustainable use can be practiced. Not a single such protected area has been created yet.

India has regressed with time when it comes to issues of access and benefit sharing in protected areas -- a cross-cutting issue that is going to be central to the character of cop 8. The arrangements it had in most sanctuaries for use of forest produce are mostly caught up in legal entanglements.

India is most likely to come out of cop 8 with self-lauding statements but lets hope the same officials are sent to some of the most contested tiger reserves in India (like the now infamous Ranthambore and Sariska) to tell the villagers why exactly cbd extolled them.