S V Govardhan Das, a geologist, compiled the voluminous FAO report on participatory groundwater management programmes in the seven districts of Andhra Pradesh along with Jacob Burke. He spoke to Jitendra about how the experiment has changed the view of policy makers. Excerpts 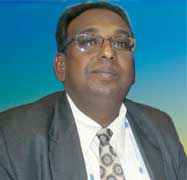 The government of Andhra Pradesh is contemplating a new bill, which may replace the current Andhra Pradesh Water, Land and Trees Act. The change in perception is largely influenced by the participatory groundwater management (PGM) model. I was member of the drafting team.

Has such an experiment been conducted anywhere else?

The PGM model is specific to India and not tried elsewhere. We trained several people from different parts of the world, including Africa and Latin America. I know that something is being tried out in Yemen on these lines. I am not aware of details of these programmes.

This study talks about local knowledge. Could you elaborate?

Local people have great understanding of surface-ground-water interface. This we came to know through our interaction with farmer groups we worked with. They will tell you which wells will become functional after which of the tanks are filled. They can also tell you if wells in certain area have to be recharged, where the impounding of water should be located. The scientific surveys (at the field level) are basically aimed at locating a suitable site for artificial recharge of groundwater. This local knowledge is helpful in validating results of scientific studies.

How was the concept of crop-water budgeting (CWB) evolved? Are farmers practicing it even after PGM programmes ended?

CWB was conceived as the critical connecting link between participatory hydrological monitoring (PHM) and PGM. Field testing of crop water budgeting was the greatest challenge faced in PGM. CWB spreadsheet (for estimation of groundwater balance) was evolved using Microsoft Excel software, consisting of ten worksheets, in the local language, also minimizing on number of entries, after one-time professional input. Resource mapping, a participatory technique, was used to update the maps and information generated at the time of baseline study—a requirement for CWB. Names of farmers owning or leasing land under each well were gathered from village records (again as a one-time exercise) prior to start of the first Rabi season, and individual crop plans documented using participatory methods in a small group exercise. Then the farmer leaders used this outcome and facilitated larger discussion on wise crop planning to match water availability.

FAO’s farmer field schools (FFS) is a popular method of informal learning, now adopted in the state on a large scale. This was first tried in Africa to encourage farmers to adopt integrated pest management (IPM) practices, promoting natural pest control mechanisms and limiting the use of chemical pesticides. A school consists of about 20 farmers meeting periodically (once in a fortnight in this case) and learning through field experiments. The focus is on self-learning and informed decision making. FFS usually lasts for a crop cycle. Taking clue from the successful application of the farmer field schools approach in IPM, it was used for capacity building of farmers. It finally resulted in the Farmer Water Schools (FWS) module.

Recently, Gujarat government made policy on use of groundwater. It put caps of 45 ft. on boring of well. Farmers face prosecution if they violate the law. Your comments

This is an absurd policy. We (geologists) recommend dimensions of a well (including depth of digging or drilling) based on integrated hydro-geological and geophysical investigations. This could vary within small distances (even within a village). To have a blanket ceiling on depth of drilling does not make any sense to me. The norm should be based on the nature of the aquifer and to a large extent controlled by elevation from mean sea level. I see this as a measure to control electricity consumption, without taking into consideration the hydrological properties of an area. More meaningful is the concept of “maximum admissible drawdown (MAD)”, discussed extensively at the last World Water Forum in France in 2012.

Have other states facing similar problems shown interest in this experiment?

Yes. High ranking officials from Tamil Nadu, Karnataka, Maharashtra, Gujarat and Rajasthan were trained while the PGM experiment was in its concluding stages. I have been invited by governments of Rajasthan and Maharashtra to share PGM experience with the officers of the line departments, about a year ago.