Surgeon Sergio Canavero, director of the Turin Advanced Neuromodulation Group in Italy, has been making news for two years after he claimed he would perform the first human head transplant surgery. He now has a volunteer—30-year-old Russian, Valery Spiridonov, who suffers from Werdnig-Hoffman disease, a rare genetic muscle-wasting disease. If all goes well, he would conduct the surgery in 2017. Canavero spoke to Rajat Ghai via Skype from Turin on his controversial quest. Edited excerpts: 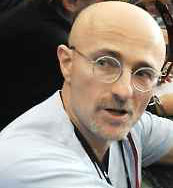 In earlier head transplant experiments like the one by Robert White (in 1970), the immune system rejected the transplanted tissue. What do you plan to do about that?

Robert White did an experiment on a monkey to prove that the brain could be revived once transplanted on another body. He did not want to keep the monkey alive. And the monkey did not die of rejection. There was no rejection. But White killed the monkey because the experiment was successful (see ‘Past attempts’). So, it is not that the monkey died of rejection. The monkey died because Robert White killed it after proving that you can detach a head and attach it to another body. But White’s work was very important for me and would be put to good use in my own work.

How would you find donor bodies?

Valery (the patient), the Russian boy, would of course be the first volunteer after experiments on cadavers or brain-dead or organ donors. The body will be supplied by a brain-dead person who suffered pure-head trauma or brain hemorrhage that kills the brain but leaves the rest of the body unscathed. So instead of taking out the heart, lungs and other body parts, we will just harvest the whole body.

You should know since you are in India, that there are Indian legends about gods exchanging their heads and bodies. I wrote about this in my first paper. So India probably had knowledge about the concept of head transplantation before anybody else.

How would your procedure work when scientists are still struggling with finding answers to paralysis?

This has nothing to do with spinal paralysis. To all my critics, including those in India, I say come to Annapolis (where Canavero will be presenting his head transplant technique at the Annual Scientific Meeting of the American Academy of Neurological and Orthopaedic Surgeons). I will address all technical questions there. There will be some very good news. But I cannot disclose more right now.

You say that if the US or Europe do not encourage such a procedure, it does not mean it won’t happen in other places. Are you hinting that you are willing to carry out such a procedure in a third country, say China?

This procedure can be done anywhere, including in India. The Americans will be my first choice. I will go there in June and make a strong point and I am sure that this surgery would happen somewhere in America. But if it does not, we will do it most likely in China because the Chinese have already invited me. But let it be known that the surgery will happen.

You are not the only person thinking about such a procedure. There is a Chinese surgeon in the city of Harbin by the name of Xiao-Ping Ren who is going to conduct similar transplants on mice and monkeys. Your comments.

Yes, we are in contact with Professor Ren. I have been studying Chinese for four years. He will be in Annapolis and we will stay in touch.

What about the ethical questions of performing head transplant?

When you speak to Valery, just ask him to back up on his wheel chair; just look at him, and there is my answer to the question of ethics.

If such a revolutionary science succeeds, there is always the chance of misuse. Your comments.

What applies to the head applies to all the other organs. The misuse is not something for me to answer. It is for you. As I told the New Scientist, I am just a technician, a mechanic. Your engine is broken, you come to me. I will try and fix it up. If the West does not want me to do it, I will not do it in the West. But, it will happen. Journalists like you have to make your readers aware that it is time to make a decision: either you want it or you don’t. Of course it will not be perfect in the beginning. But you have to start somewhere.