After a fortnight of uncertainty that followed assembly-election results in Delhi, the Aam Aadmi Party is finally set to form the government. Just before the elections, AAP's founder-leader and chief minister-designate, Arvind Kejriwal, spoke to Kumar Sambhav Shrivastava about his party’s position on sustainable development. Edited excerpts 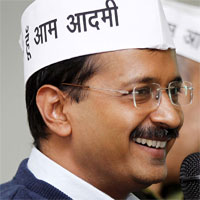 The only long-term solution to the problem of air pollution is to improve public transport. Only when public transport becomes comfortable and convenient will people stop using personal cars, which are the biggest source of Delhi's pollution. The Aam Aadmi Party (AAP) is committed to improving and expanding the public transport system. We would also give incentives for use of less-polluting fuels, like CNG. Controlling air pollution is also important for the health of people, since one-fourth of health problems are because of Delhi's polluted air.

As stated earlier, we are committed to providing inexpensive public transport to the aam admi (common man). Today, the transport policy is made in bits and pieces—someone thinks of the metro, someone else about the buses and a third authority about rickshaws and autos. We want to evolve a holistic transport policy that plans for all these modes of transport. For this, we plan to set up a unified transport authority. We plan to expand the Metro and the DTC bus service on a large scale. There are many parts of Delhi, especially outer areas, that are very poorly connected by public transport. Our priority would be to connect these areas.

One major problem in public transport is last mile connectivity—it is unreliable and often unsafe. For many women, the biggest safety concern is getting home from the bus stop or metro station. We will give priority to providing reliable and secure last mile connectivity. This would be via feeder buses, shared autos, rickshaws and e-rickshaws. Some of these are already being used, but it is not being done in a systematic manner. We would want to do a route rationalisation for all modes of transports and remove some of the unnecessary restrictions on them. We will make sure that there are proper stands for autorickshaws and cycle rickshaws.

On congestion, pedestrian mobility and cycling

More than 40 per cent people in Delhi are pedestrians or cyclists. If the aam admi is walking or cycling, we have to ensure that there is space for them on the roads. Today it is very unsafe to be walking or cycling in Delhi. We would look to make pavements on all possible roads, and special corridors for cyclists.

On health of Yamuna river

The state of pollution in the Yamuna, and the contribution of Delhi in this pollution, is a matter of shame for this city. The Yamuna flows for 1,300 km; only a 22 km stretch is in Delhi, and yet the city is responsible for 80 per cent of Yamuna's pollution. The situation is so bad because Delhi throws its untreated domestic sewage and industrial effluents into the Yamuna. More than 25 per cent of Delhi does not have sewage lines and the government has washed its hands of the responsibility of providing proper sewage to a large part of Delhi. Therefore, all the sewage from these areas flow into the Yamuna. AAP won't let sewage and effluents flow into the Yamuna.

We are committed to connect all houses in Delhi to the sewerage network—whether they are in slums or unauthorised colonies. We would look towards a redesign of the sewerage system, so that it is more decentralised and sewage treatment can happen locally. This would also reduce the cost of the sewage disposal and treatment. And the functioning of the sewage disposal and treatment would be monitored by the local mohalla sabhas. We will also install bulk meters in all colonies for correct estimates of the amount of sewage being generated, and accordingly build more sewage treatment plants. No sewage will go into the river untreated.

Effluent treatment plans would be built in Delhi's industrial areas so that untreated effluent does not flow into Yamuna.

On drinking water and sanitation

Water and sanitation are among the biggest problems of the aam aadmi in Delhi. Thirty per cent of Delhi's population does not get water supply inside their homes; where there is supply, the water is dirty and contaminated. We will ensure that all people in Delhi get clean water in the taps of their homes, irrespective of whether they are living in slums or unauthorised colonies. We would start laying the pipelines for this as soon as we come to power.

As many as 170,000 residents of Delhi do not have toilets in their homes.There is a serious shortage of community toilets for people who do not have toilets. And where there are community toilets, they are in a very bad shape—there is no water, no maintenance. Harassment of women outside community toilets or when they go for defecating in the open is a very serious issue for women's security. AAP is committed to building 200,000 toilets in Delhi. The ongoing maintenance, upkeep and security of these toilets would be managed by the local mohalla sabhas. We also intend to promote eco-toilets, that use less water.

On new Lokpal bill for Delhi

AAP was born from the anti-corruption struggle and is committed to passing a Delhi Jan Lokpal Bill within 15 days of coming to power. All public officials, including the chief minister, ministers and MLAs, shall fall within the purview of the investigation of the lokpal. Any public official found guilty of corruption would be removed from job, sent to prison and their property would be confiscated. Time-bound investigation and punishment in cases of corruption will be ensured. Lokayukta would have the power to initiate investigations and prosecution against those with charges of corruption; it would have administrative, fiscal and investigative autonomy. Citizens’ charter of time bound services would be introduced, and any officer found exceeding time limits would be fined. Whistleblowers would be given protection. Honest officials like Ashok Khemka and Durga Shakti Nagpal would be encouraged and protected.

On public health and government hospitals

Today, the public health system is in a shambles and private hospitals are busy making profits. One major illness in the family can finish all the savings of the aam aadmi. AAP is committed to improving the government health care facilities (and making them as good as high quality private hospitals) so that all citizens of Delhi—rich or poor—have access to high quality health care. New government hospitals would be opened to ensure Delhi conforms to the international norm of five beds for every thousand people. New primary health centres would be established, these would be monitored by local mohalla sabhas. Homeopathy, ayurveda, unani, naturopathy and other alternative systems of medicine would be promoted by the government and would play an important role in the public healthcare system.

On garbage and waste disposal

Everybody who lives in Delhi knows how dirty and polluted the city is; garbage is piled up in every corner of the city. Mountains of garbage can be seen on the outskirts of Delhi where we throw all the waste of the city. We hope to change this radically and make Delhi one of the cleanest cities in the world. There is a lot of corruption in waste management by the Municipal Corporation of Delhi. We would give mohalla sabhas the complete authority and funds for waste management and cleaning of their localities. We would start the segregation of bio-degradable and non-biodegradable waste at the household level. Littering or disposal of construction debris in public places would be heavily fined. We would also ensure the effective implementation of the ban on plastics bags.

People in slums live in shocking and inhuman conditions. We will try and rehabilitate slum dwellers at the location where they currently live. But if that is not possible then we shall rehabilitate them as near as possible. But we will ensure that no slums are demolished, till arrangements for rehabilitation are done. In the meanwhile, we shall ensure water supply and sanitation facilities in the existing slums.