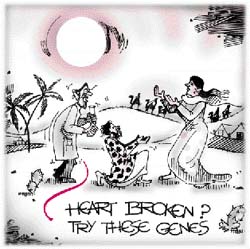 heart cells, unlike most cells in the human body, lose their ability to divide and multiply soon after their birth. However, by tinkering with the genes, researchers have created mice whose hearts do not lose this ability. They say the discovery could pave the way for treating heart failure using gene therapy.

Cells with extremely specialised structures, such as neurons and heart cells, find it very difficult to divide. So when heart cells die because of high blood pressure or a blood clot, other cells compensate by growing larger. However, these swollen cells lose their ability to pump blood effectively as their normal, healthy counterparts, and the heart will eventually fail the patient even if he or she undergoes medicine to regulate blood pressure.

Finding a way to make these heart cells divide after a heart injury would be a perfect solution to this problem. At the recently-concluded meeting of the American Heart Association held in Dallas, usa , Robb Maclellan of the Los Angeles-based University of California described his work with genetically-engineered mice whose hearts lacked a crucial gene called retinoblastoma . This is the gene responsible for suppressing cell division in many tissues.

At the age of eight weeks, these genetically-engineered mice had hearts some eight per cent larger than normal mice, due to the on-going cell division. And the heart cells did not stop dividing until the mice were 20 weeks old. Maclellan and his team say they have also identified a protein called mrp 1 that appears to block the effects of retinoblastoma in heart tissues. They think this protein could be able to initiate cell division in the mouse hearts again.

"There are glimmers of hope in the preliminary results in a number of laboratories," says Loren Field from the Indiana University School of Medicine in Indianapolis, usa . He and his colleagues have demonstrated that overexpression of two genes known as cyclin d -1 and tsc2 can prompt heart cells to enter the initial stages of the cell division cycle.

But the most important step will be for scientists to show that heart cells can proliferate after an injury, and to follow the progress of the resulting cells to check that they remain healthy, according to Field. "A lot of these genetic manipulations are markedly increasing the number of cells producing dna in the heart," he says. "But what is the fate of all these cells?"

Michael Schneider of the Houston-based Baylor College of Medicine, who also studies proteins involved in cell division, agrees that it is relatively easy to get heart cells to take the first step towards division and duplicate chromosomes, but that later steps are proving to be more elusive. "The idea that everything would flow like water over a waterfall is not the case here," says Schneider. However, he is confident that researchers will eventually solve the problem.

In another development, French researchers have found that rising atmospheric pressure and plunging temperatures can spell danger for people who are at risk of heart failures. Philleppe Amouyel of the University of Lille and his colleagues studied statistics on heart attacks for some 250,000 men. Over a period of 10 years, 2,524 men suffered a total of 3,314 heart attacks. The researchers then compared the timing of the attacks with weather pattern information during that period.

Their study shows that a drop in temperature of 10 c increases the risk of heart attacks by as much as 13 per cent. Extreme atmospheric pressures are also problematic. When the pressure falls below 1,006 millibars or goes up beyond 1,026 millibars, risk of a heart attack rises by a similar amount. The researchers advise people suffering from heart-related problems to ensure "that their houses are well heated in winter".