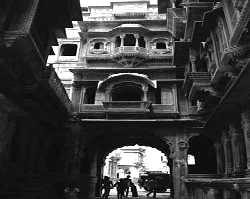 this time it's not the scarcity but an excess of water that is causing problems in the desert city of Jaisalmer in the western state of Rajasthan. The famous Sonar kila , the world largest living fortress, has started collapsing gradually due to excessive discharge of waste water by the growing population and rising numbers of tourists. Moreover, the foreign fund meant for its restoration are being diverted to repair a private palace.

Relief has come from the American Express corporation, which has donated us $100,000 to Indian National Trust for Art and Heritage ( intach ) for the restoration of the fort. However, the project has sparked off a controversy over the fact that the funds will not be used for the entire fort but only for Rani Ka Mahal , which remains the private property of Maharaja Brij Raj Singh, heir of the royal family of Jaisalmer and the chairperson of the local Chapter of intach .

The picturesque Jaisalmer fort is the only living fortress in India that has been identified as one of the hundred most endangered monuments in the world by the World Monuments Watch Programme ( wmwp ) that sponsors worldwide preservation activities.

"When the fort was conceived in the 12th century, drainage could not have been considered a unique problem" says N D Sharma, a historian. Lack of drainage has lead to seepage of water in the soft stone which forms the base of the fort. The walls have collapsed at various places, the bastions supporting it have sunk in the ground and the moisture has ruined the stone.

The local people are very unhappy with the issue. They resent the fact that they have not been consulted in this decision and the maharaja has taken advantage of his position. Suraj Jain, a resident of the fort and a member of intach, asks: "Why only choose Rani Ka Mahal when the whole fort is in ruins?" Suresh Rathore, a journalist, says, "We were not consulted on this issue and neither called for the meetings." They feel that unless the problem of sanitation and drainage is not looked into, conserving just a part of it serves very little purpose.

On the other hand Amita Baig, the Director of the Jaisalmer Conservation Initiative of intach , defends the decision by saying that the funds were not adequate for the entire fort and the decision to take only Rani Ka Mahal was a joint one by the experts of the wmwp and architects. "In fact it is very considerate of the maharaja to give up his property for public use when he could have turned into another Umed Bhawan (the palace in Jodhpur that has been turned into a hotel)," she points out.