In the natural world away from the laboratories, redundant genes are not really useless 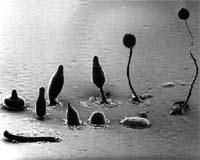 the existence of the so-called redundant genes has been a major embarrassment for molecular biology. In a variety of systems, scientists have observed many genes, believed to be important for the functioning of the organism, could be removed without any apparent ill-effects. Such genes were said to be redundant and many explanations were proposed for their existence, the 'default option' being, of course, that if a gene has no use, it should wither away by accumulating mutations. All along, there was the thought that the working of a gene under laboratory conditions may not be the same as its working in nature; but the attraction of conducting experiments in the controlled environment of the laboratory, combined with the extreme difficulty of doing so in the wild, meant that this thought was given only token acknowledgement.

Now, at least in the case of one organism, Eleonora Ponte and colleagues at the University of Turin, Italy, have succeeded in showing that a gene, supposedly redundant in the laboratory, becomes crucial under natural conditions ( Proceedings of the us National Academy of Sciences, Vol 95, p9360) .

The Ponte group worked with the soil amoeba Dictyostelium discoideum and with its mutant version that had lost a gene, known as contact site A ( cs A ), for making a kind of 'contact site' -- a protein that made cells of a certain age stick to one another. Laboratory studies had shown that the cs A gene was dispensable: amoebae that lacked it seemed to do just as well as others that did not. These studies had been carried out using that stock in trade of all microbiologists: glass dishes containing agar-agar as an artificial substratum in place of natural soil.

Ponte and her group asked the very simple question, what happens if on top of the agar layer you sprinkle some soil, thereby making the environment more akin to what is found in nature? The answer was dramatic. Not only does the cs A mutant take longer to develop than the wild type, but it does very poorly when it comes to the crucial test of reproductive efficiency. Firstly, the number of reproductive spores formed by the csA mutant ranges from 25-50 per cent of the number produced by the parental type. Secondly, when the mutant and the parental types are combined as amoebae in a 1:1 ratio, the resulting spores ar,e on an average 70-80, per cent of the parental type. The mutant seems to get elbowed out of the competition.

The findings are simple but make an extremely important point. Namely, that when assessing the relative qualities of two organisms of the same type but differing in their genetic makeup, it is crucial to make the test under conditions as natural as possible. The reason is that living creatures have been moulded over the aeons by the forces of natural selection to be adapted to a certain set of circumstances. Hence, tests made under conditions that are drastically different may turn out to be meaningless.