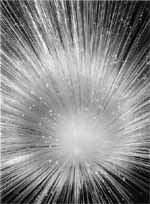 in recent years, optical fibres have proved crucial for the information technology sector, as these fibres allow much better and quicker transfer of data. In the west, optical fibres have been used by the telecommunications industry instead of conventional wires with great success. Thanks to these, there has been tremendous growth in the use of networks for audio, video and data transfer. Though developed in the 1950s, optical fibres came of age only in the late 1980s.

Now, to take the technology into the next millennium, Jonathan Knight and his colleagues from the University of Bath, uk , have designed an optical fibre, which is fundamentally different from what has been used until now. This discovery could well lead to another revolution in designing more efficient fibre-based network elements. The basic idea of the conventional optical fibre is that of total internal reflection. To the layman, it means no data loss, unlike in conventional wires and cables, which are all prone to some loss of data. The basic medium of fibre optics is a hair-thin fibre that is made of plastic, but most often of glass. A typical glass optical fibre has a diameter of 125micrometers (each micrometer is a millionth of a meter). This is actually the diameter of the cladding, or the outer reflecting layer. The core, or the inner transmitting cylinder, is commonly about 10 micrometers in diameter. The refractive index of the central core is larger than that of the outer covering. This is the secret of the total internal reflection that fibre optic cables are famous for. Light rays beamed into the fibre can propagate within the core for great distances with remarkably little attenuation or reduction in intensity. The degree of attenuation over distance varies according to the wavelength of light and other factors, such as the composition of the fibre.

In the new fibre developed by Knight and his team, the core has a lower refractive index than the cladding as a result of which total internal reflection is not possible. The fibre is basically a photonic crystal, a structure that is repeated in space, with a periodic array of air holes placed at the vertices of a honeycomb like structure. The key feature of this new fibre is that it 'guides' light in air. Since some wavelengths are absorbed strongly by silica (the basic ingredient of glass) this new fibre could be used to deliver light at those wavelengths without any loss of power.

There are several theoretical and practical issues, which need to be solved before such a fibre could be produced commercially. Determination of the exact amount of losses in transmission is one such problem. Some reasonable length of fibre also needs to be fabricated before any practical applications can be designed for it. Nevertheless, Knight and his group have shown that, in principle, it is possible to use air instead of glass to guide light in photonic crystals ( Science , Vol 282, 1476, 20 November, 1998).