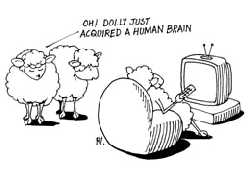 scientists in Scotland have created a lamb that has a human gene in every cell of its body. Now animals with human genes could be used, in theory, to produce hormones or other biological products for treating human diseases, say cloning experts. By inserting human genetic diseases in the animals, they can be used to test new treatments. Genetically altered animals may also produce organs that could be transplanted into humans with less chance of rejection.

To genetically engineer the sheep, a team of research led by Keith Campbell of ppl Therapeutics and Ian Wilmut of the Roslin Institute in Roslin, Scotland, took skin cells out from a foetus (an unborn viviparous animal in the womb) sheep. Then they grew them in a laboratory and added new genes, one of which was human. The scientists replaced the genetic material of a sheep's egg with that of the foetus skin cells. The cloning was completed when the foetus cell's genes successfully took up residence in the nucleus of the egg cell and directed the development of a baby lamb whose every cell contained the skin cell's genes.

Experts in cloning says the experiment is a natural outcome of work that began with the birth of two lambs in 1995. Wilmut and Campbell had cloned them from differentiated foetus cells, defying the conventional wisdom. According to the earlier conventions, once a cell is differentiated, its dna could not be turned back to its primordial state.

The first of the new genetically engineered lambs was named Polly as she was a Poll Dorset sheep. She was cloned from a foetus cell that had a human gene. The scientific director of ppl , Alan Colman, says the research is expected to revolutionise transgenetics in domestic animals as it will for the first time allow investigators to add or remove genes from animals at will.