Is TN wasting its energy? 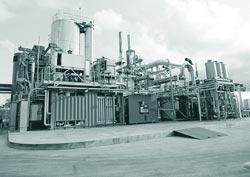 tamil Nadu chief minister J Jayalalithaa's decision to resuscitate the 14.85-megawatt Perungudi waste-to-energy (wte) plant has been greeted with dismay by environmentalists. On January 31, 2003 the state government cleared the project. This was preceded by a presentation made by Energy Developments (edl) Private Limited, the company promoting the plant, to the state government and Tamil Nadu State Pollution Control Board (tnspcb).

The greens contend that the gasification technology used in the plant will not solve Chennai's waste problems. In fact the process will lead to emissions of hazardous dioxins and furan. "Gasification is an incineration process and emits cancer-causing dioxins," says Ravi Agarwal, coordinator of New Delhi-based non-governmental organisation, Srishti.

edl officials dismiss the environmentalists' views. "Our plant is based on the solid waste energy and recycling facility technology, which will enable us to treat Indian waste. Even our dioxin emissions are within prescribed international standards," says Sunand Sharma, managing director of edl.

But, says Gopal Krishnan of Global Alliance for Incinerator Alternatives, an independent international group working towards waste reduction, during the presentation several questions regarding the plant's technology were raised for which company representatives did not have satisfactory answers.

The Perungudi plant was approved in 1999, but did not see the light of day. Sharma says that lack of co-ordination among government departments impeded the setting up of the plant. " edl was promoting the Perungudi unit on the basis of their plant in Wollongong, Australia. But this plant did not exist in 1998 and was commissioned only in 1999," says Krishnan.

While a debate rages on the issue, the tnspcb's verdict is eagerly awaited. The board will keep a close watch on the wte plant's environment impact assessment and public hearings before issuing a no-objection certificate.