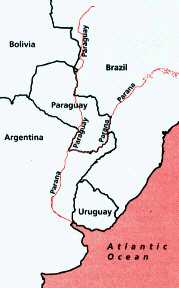 one of the largest proposed infrastructure projects in South America - the Hidrovia Paraguay-Parana river navigation project - has received a setback with an independent panel of experts concluding that its current designs and evaluations are fundamentally flawed. A press release signed by Aleta Brown, campaign associate for the California-based non-profit organisation International Rivers Network, said the panel found that official studies of the project are wholly inadequate and fail to resolve questions regarding the environmental and social risks. These include damage to the Pantanal wetlands and exacerbation of conditions for the region's millions of poor people.

The Hidrovia project is aimed at expanding navigation in the Paraguay and Parana rivers, which form the border between Argentina, Bolivia, Brazil, Paraguay, and Uruguay. This is to be done by dredging a deeper channel, removing rocks, straightening some curves, and building new ports. This would help expand exports of iron ore, soybean, and timber, among other commodities.

The Inter-American Development Bank ( idb ) and the United Nations Development Program ( undp ) have provided more than us $8 million to support a series of studies on the economic feasibility, engineering, and environmental assessment of the project. Cost estimates of the project have ranged from $100 million to more than $1 billion.

An independent panel of 11 prominent researchers and scholars from North and South America was invited by the New York-based non-profit organisation Environmental Defense Fund ( edf ), and by Fundacao Centro Brasileiro de Referencia e Apoio Cultural ( cebrac ), a Brazilian non-profit organisation. The aim was to review the official studies and determine whether the project, as designed, would achieve the five countries' stated priorities of promoting sustainable development. The panel also undertook an evaluation of the methods, analyses, and conclusions of previous studies on the effects of the project. It consisted of hydrologists, ecologists, economists, and anthropologists from some of the leading universities in North America and South America.

"The studies we analysed do not form an adequate basis for making decisions about expending scarce resources and bringing about irreversible changes to the environment," said Theodore Panayotou, an environmental eco-nomist with the Harvard Institute for International Development. "One of the main purposes of these official studies was to examine the social and environmental costs of the project compared to its other benefits. Unfortunately, our review revealed that the consultants did not adequately answer these questions, and in fact overestimated the project's benefits - like iron exports - and underestimated its significant costs - like loss of fisheries," he explained.

John Melack, an aquatic ecologist from the University of Cali-fornia-Santa Barbara, has worked in the region for more than a decade. He concluded in his review that "the official assessments of potential ecological consequences of the Hidrovia on the Pantanal are so seriously flawed that the judgements of 'low to moderate' impacts cannot be accepted as credible."

The Pantanal wetlands - the largest remaining wetland in the world - would be "drastically affected by the proposed engineering works," said Juan Paggi of the National Institute of Limnology, Argentina. "A key element of the effects is the hydrologic impact on the region," said Eneas Salati, a hydrologist with the Brazilian Foundation for Sustainable Development. "These studies do not provide a complete or balanced analysis of the impacts on the wetlands, on water supply and flooding, on contamination from hazardous chemicals, or on regional and global warming trends."

"As a development strategy, the Hidrovia project can be expected to accelerate a major agrarian crisis that could destabilise the political economies of the Mercosur countries (Mercosur is a trade agreement between Brazil, Argentina, Uruguay and Paraguay)," said Thayer Scudder, an anthropologist with the California Institute of Technology who has examined large-scale water projects around the world for 40 years. In examining the Hidrovia's inefficiency, he and co-author Michael Clemens emphasise that "past experience with similar projects has shown that this type of costly project will do little to benefit the region's low-income majority and, indeed, will produce fewer benefits overall than strategies targeting these groups directly. It's 'trickle-down economics' all over again and the idb , undp , and governments like Brazil should have learned by now that it doesn't work."

"We convened this panel to help provide to the public and decision-makers objective and credible analysis from well-respected academics," explained Deborah Moore, a senior scientist with the edf . "Public funds are paying for these studies and potentially for the whole project - from countries that contribute to the idb - and we believe the taxpayers' money should be environmentally, socially, and economically sensible. This panel concluded that current plans for the Hidrovia do not make sense."

Mauricio Galinkin, Technical Director for cebrac , said: "We in Brazil have watched what has happened elsewhere - in the Mississippi, the Everglades wetlands, and the Rhine in Germany - and we don't think that this Hidrovia project is economically justified or worth the risk of jeopardising the Pantanal." Henrique Rattner, an economist from the Univer-sity of Sao Paulo, said: "Hope-fully, creating a more-informed debate will help avoid the environmental, social and economic debacles of the last few decades of large-scale river development projects."

The panel of experts recommends that additional studies be conducted to better address the cumulative and indirect impacts of the project and the expected high environmental and social costs. Transportation alternatives for the region already exist and should be better explored, such as improvements in existing roads, railroads, and possibly other existing waterways, say the panellists. Better consultation with the region's communities and 150,000 indigenous people to support their economic development should be promoted, such as community-based eco-tourism, production of high-value crops, and access to credit and basic community services, among others, they suggest.