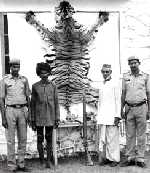 following a petition filed by World Wide Fund for Nature-India ( wwf-i ), the Supreme Court ( sc ) has directed state governments to provide better arms, wireless communication systems, and uniforms to forest guards to effectively check the menace of poaching in national parks and sanctuaries of the country. The Court has also directed state governments to complete the process of settlement of rights of people living in sanctuaries and national parks within an year.

The decision has evoked a mixed response. Environmentalists do not welcome it as a whole. Some say that this decision is yet another case of judicial diktat on the lines of the bureaucratic actions that alienate people from their forests. "It is a good judgement in parts but has serious implications for forest dwellers," says Walter Fernandes of the Indian Social Institute ( isi ), New Delhi. He echoes the concern of several environmentalists over community rights on forests. "The law-makers are refusing to speak about any joint protected area management and there is a great possibility of their being interpreted wrongly at the field level."

"Arms cannot solve any problems," says Avdhesh Kaushal of the Rural Litigation and Entitlement Centre, Dehra Dun. Kaushal espouses the cause of people living in the Rajaji park area in Uttar Pradesh and is incensed at the prospects. "Can the government actually give so many arms to the guards. And who will they use them against?"

The obvious answer may be poachers. But it is a vexed issue. Delhi-based environmentalist Ashish Kothari says: "While this (arming of guards) is necessary to deal with poachers, given the situation in these areas, this could also greatly escalate the conflicts between forest staff and villagers." This order is only going to cause greater suffering than has already been caused by Wildlife Protection Act, he points out. The decision will intensify conflicts and demands to denotify our protected areas, several environmentalists fear. "The winners" as Kothari points out will be "contractors, politicians, and industrialists" who will use the villagers as fronts and get what they want anyway.

Prominent sc lawyer Rajiv Dhawan opposes the move on the ground of human rights. "You cannot arm civilians just like that, armed people are trained to kill. It must be authorised by a statute."

"The criticism is not based on any experience," says Raj Panjwani, the petitioner for wwf-i . "There is no reason to believe that the arms are going to be used against the people. Arms are to be used against the poachers," he says. Even guards at banks are armed, he points out. "Nobody raises an issue that these arms can be used against the masses." Regarding the time frame of one year, he explained: "It only expresses the urgency of the Court to do what it should have done long back."

Rajiv Goel, chief conservator forests, Delhi, has applauded the verdict. "See what is happening in the case of Veerappan. Should the forest guards' arms be tied behind their backs so that they cannot defend themselves. Its not a question of using arms against the people but against the mafia."

"Arms and wireless communication systems will not help protect forest areas. What they need is better communication with local people," says Anju Sharma, wildlife campaigner at the Centre for Science and Environment. "If they set about completing the 'process of settlement of the rights of people living in the sancturies' within an year, there will be utter chaos."

The judgement, Kothari feels, speaks of the rights of the people without defining them and is leaning towards the rights of wildlife without necessarily being exclusive. Kothari is critical about the one-year deadline for the settlement of rights. "It is going to mean chaos and conflict galore."

The bench that pronounced the controversial judgement also directed that all state governments shall report the putting up of any denotification proposals before the state assemblies and shall seek the view of the Indian Board of WildLife.