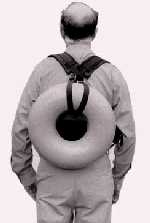 a breathing apparatus has been developed that would be safer to use and could revolutionise firefighting, skin diving and other activities where people must wear breathing equipments. Researchers at Britain's Defence Evaluation Research Agency ( dera), F arnborough, Hampshire, have developed the device. It stores air in a ring-shaped 'toroid'. Unlike a conventional cylinder, the equipment is much easier to use. Researchers say the toroid will weigh around 6 kg which can be compared with the lightest breathing appratus in the market ( New Scientist , Vol 155, No 2092).

The use of a cylinder makes it difficult for the emergency workers to pass through small openings and narrow gaps. It becomes extremely difficult for the cylinder carrying fire fighters to take people to safety. The valves of the cylinders are in such a risky position that they are required to be protected to avoid potentially lethal blow outs. In a toroid, however, the valves are safely placed in the middle of the 'doughnut'.

A cylinder weighing nearly 12 kg rests on the shoulders, and has to be mounted on a sturdy metal plate to stop it moving around, whereas the toroid requires no metal plate and fits neatly into a canvas satchel. It is comfortable to wear a toroid because much of the weight is transferred on to hips instead of the shoulders , says John Cook, head of the dera development team.

Brian Richards of Life Support Engineering, Storrington, Sussex, first brought the idea of the toroid to the dera. He looped a cylinder back on itself to create a toroid. The design uses aramid fibres, more commonly known as kevlar, to strengthen the vessel walls. All the earlier attempts to develop toroids failed because of the use of very heavy metals. But the use of kevlar has allowed the researchers to achieve success.

A toroid can safely accommodate air pressurised to the usual 207 atmospheres. It requires the inner rim of the toroid to be 50 per cent thicker than the outer rim. But manufacturing the shell with a varying thickness of metal is too costly, says Cook.

Now, the developers have wound a spiral of aramid fibres around the exterior to stop it freezing in winter. The slim fibres are bunched together at the inner rim to counter the extra stress. Cook and Richards have patented the design and are negotiating with commercial suppliers of breathing equipment for marketing the product. According to the researchers, the breathing equipment has got a huge market. Every year, they say, nearly two million units are sold throughout the world.