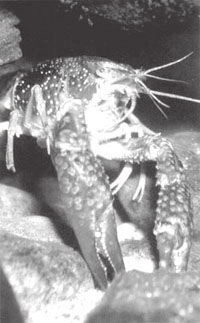 winning is important. A chemical signal that stimulates the nerves of crayfish, who win fights can have completely the opposite effect in those that lose. The findings by scientists in Atlanta, Georgia, show that events have the power to change the way the nervous system functions. The research might even help explaining why some people develop mental illness while others do not (New Scientist, Vol 153, No 2067).

Serotonin is the chemical which affects aggression and dominance across a range of animals, including humans. A psychologist at the University of California at Los Angeles, Franklin Krasne had shown several years ago that serotonin inhibits the tailflip in crayfish. The tailflip is a well-known reflex of the crayfish and occurs when it is hit from behind, causing it to flip and face the threat.Donald Edwards and his group at Georgia State University in Atlanta decided to re-examine Krasne's result with one more element: fist fights. They paired off crayfish that had been raised in isolation and let them fight out until a clear winner emerged.

Edwards kept the pairs together long enough for their roles to be firmly imprinted, and then injected them with serotonin. Microelectrodes were used to assess what value the chemical had on the neuron responsible for the reflex. Serotonin stimulated the neuron to fire in dominant crayfish, whereas in losers serotonin inhibited the same nerve. Different serotonin receptors appear to be active depending on whether the crayfish is dominant or subordinate. Edward infers from this that social experience reaches down the nervous system and changes the molecular structure, thus showing how plastic the nervous system is.

The response to serotonin can be manipulated. When Edwards made two subordinates square off in a second round, the victor's nervous system adapted accordingly within 12 days. But a dominant crayfish that found itself demoted to a subordinate after a fight with another dominant was much more resistant to change. After 38 days, he still had not accepted his lower rank. One of Edwards colleagues thinks this is the neural correlate of denial.

The results of the Georgia group were used by Krasne's team to predict how dominant and subordinate crayfish would respond to a whack on the tail. They confirm that subordinates are less likely to tailflip. The discovery that experience can shape the nervous system could explain how a genetic predisposition to an illness may manifest itself in some people and not in others. "It could explain why mental illness is so experience dependent," says Krasne.