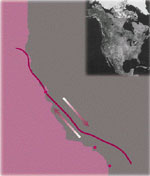 high pressure carbon dioxide ( co 2 ) pumped from deep within the Earth may lead the rocks of the San Andreas in California to slide past each other and cause earthquakes. Scientists in California say that their theory could solve a puzzle that has troubled geologists for past so many decades ( New Scientist , Vol 169, No 2109).

The San Andreas separates two sections of the Earth's crust. On the east side of the fault, the North American plate moves towards the southeast whereas on the west side the Pacific plate moves along to the Northwest. A snag already exists for centuries in some parts of the fault. Whenever the snag releases the stress, earthquake takes place.

Over millions of years, this jerky motion has caused the two sides of the divide to move hundreds of kilometres apart. Scientists assume that due to much grinding of rocks during these movements, the fault should heat from friction, making the ground few hundred metres below the surface very warm. However, nearly 30 years of work by geologists to look for the heat has gone into vain.

Yousif Kharaka, a geologist at the us Geological Survey in Menlo Park says, "Something seems be lubricating the fault and thus removing the friction." For this he has an answer. He has found a possible source for the slipperiness: fluids from the Earth's mantle, more than 30 kilometres below the surface.

During their study, the researchers analysed water samples from various places along the fault such as springs, seeps and wells. They chose water that was unusually warm or had high concentration of minerals and salts. They wanted to ensure that the water came from a great depth and had interacted extensively with surrounding rock. Then the researchers measured the ratio of the isotopes helium-3 and helium-4 relative to the value for air. They wanted to know whether the water contained material from the mantle.

After studying the water samples, the researchers have reached the conclusion that each atom of helium-3 from the mantle will always come up mixed with co 2 . At earthquake depth, this gas could build to high pressures, Kharaka says. The model of the team shows that the co 2 present in the region may push the plates apart every century or so. Such phenomenon suggests that the gas could alone trigger earthquakes in the region.

Mark Zoback, a geophysicist at Stanford University in California, usa , says that the findings are surprising, which can lead to several interesting questions. However, he says that the real test would be take samples from the fault to find out whether almost pure mantle gases under high pressure are present in the region.