It is going to require something more than just drugs to deal with HIV, say scientists 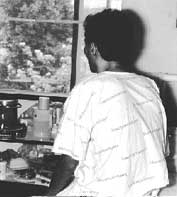 in the 18 years that we have known the acquired immunodeficiency syndrome ( aids ), medical science has made significant advances towards combating the menace. The human immunodeficiency virus ( hiv ) has been isolated and characterised, several drugs have been discovered in record time, vaccine initiatives have been launched with funds that are unprecedented in amount for a single disease. Also, possibly the biggest-ever public health campaign has been launched to prevent its spread.

While efforts to reduce the number of new infections have been successful in the West, there is no let up in hiv infections in developing countries. Data just released by the World Health Organisation ( who ) identifies aids as the fourth biggest killer disease, climbing three notches from it seventh place last year.

According to who , there are over 30 million hiv carriers in the world, with India accounting for about four million; about 2.3 million have already perished due to aids .

Drug therapy, though expensive, is considered to be an important means of controlling the spread of the virus within the body. The 11 anti-retroviral (anti- hiv ) drugs now available -- four additional drugs are being investigated -- offer an expanding choice of drugs and drug combinations as initial treatment options for hiv .

Moreover, doctors now have more precise tools to measure levels of hiv in blood, allowing them to closely monitor responses to treatment and, if necessary, alter treatment to make it more effective. With such an arsenal, for the first time, eradicating the virus from the infected person appears to be a possibility -- though a distant one.

Now, in the midst of these signs of hope, comes the bad news about drug treatment. Small amounts of hiv may hide in certain white blood cells -- even in patients whose blood appears to be free of the virus. This is the finding of two new studies by Linqi Zhang, a researcher with the Aaron Diamond aids Research Center at Rockefeller University, New York, and Manohar Furtado and his team from Northwestern University Medical School, Chicago. Moreover, in some patients, these bits of virus continue to evolve and replicate slowly ( The New England Journal of Medicine , Vol 340, No 21).

The New York researchers followed eight patients who had been treated with combination antiviral therapy for at least two years. While the virus appeared to be completely eradicated from these patients' bloodstream, all eight had copies of the virus lurking in certain long-lived white blood cells. Two patients had copies that were showing signs of replicating. This was not totally unexpected.

"This is very sobering news," says Anthony Fauci, director of the National Institute of Allergy and Infectious Diseases in Bethesda, Maryland, usa . "The goal of completely eradicating the virus from a patient becomes more problematic if there is a reservoir of virus that is continuously replenished."

Yet, this does not mean that antiviral drugs are a failure, Fauci points out. The drugs are reducing viral levels enough for symptoms to improve greatly, giving people an opportunity to live longer and more productive lives. The reduced viral load gives an opportunity for their immune systems to fight back and eliminate the remaining viral burden.

Virologists can tell if a virus is replicating by looking for mutations in the virus over time. As hiv grows and replicates itself, it makes mistakes and changes to correct the mistakes. According to James Hoxie, professor of medicine at the University of Pennsylvania and director of the Penn Center for aids and hiv Research in Philadelphia, if there are genetic changes, this means that the virus is reproducing, rather than lingering in a latent state. Researchers compare what virus particles look like over time and thus conclude that it is still active.

Says Hoxie: "The bottom line is that whether the copies of the virus are replicating or asleep, they represent a persistent reservoir of hiv that is not being eliminated by the drugs, which are so good and so active in suppressing levels of free virus in the plasma".

When the combination therapy first appeared, doctors had hoped that it would turn out to be a cure for the virus. "There were some bold predictions that perhaps if the viral levels continued to decrease, the virus might ultimately be eliminated from the body," says Hoxie. "This new study is telling us that a cure is going to require something more than just these drugs."