Bacteria and hypertension: a new study says the two are actually linked 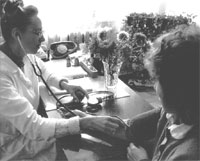 infections are a pretty simple affair to most of us. It is usually something we "catch" inadvertently, and then pop in some pills and forget the whole episode. The cycle lasts for about a week. However, despite exceptions such as leprosy (which brings prolonged misery), or perhaps, tuberculosis -- a disease that takes longer to treat -- the general opinion still reigns: diseases caused by germs are short, sharp shocks that can be fought effectively if they are treated correctly and in time.

Wrong . In recent years, some long-term effects of bacteria, even after they have been rooted out of the system, have come to light. Hardening of arteries -- caused due to the prolonged presence of the germs inside the blood vessels during or after an infection -- can bring ensuing years of misery to the infected patients. Exploring the role of such infections has opened up a new chapter in medicine. Even the recent International Conference on Emerging Infectious Diseases held at Atlanta, usa , had a separate session on these infections, something that was unthinkable only a few years back.

The effects of these "fastidious" bacteria and their role in several heart diseases like atherosclerosis (hardening of arteries) has recently been getting a lot of scientific attention. The culprit Chlamydia pneomoniae ( C pneomoniae) has been of enormous concern to doctors who linked it to atherosclerosis and stroke.

British researchers now report that C pneomoniae , responsible for about 10 per cent of respiratory illnesses usually called flu, may also be associated with severe hypertension. And a second report hints that treatment with antibiotics may help prevent C pneomoniae -related atherosclerosis, at least as far as laboratory animals are concerned.

This new study says that patients with extremely high blood pressure are twice as likely to have been previously infected with the microbe than control patients without hypertension ( Hypertension , Vol 31, No 2).

According to Peter J Cook from the Heartland Hospital, Birmingham, uk , this bacterium is one of the most prevalent agents of infection across the world with a wide range of clinical manifestations, including coronary-heart disease and stroke. The current research further confirms the often-suspected link between germs and severe blood pressure.

The arterial hardening occurs as the bacterium likes to inhabit the fatty plaques which accumulate in the insides of blood vessels. This causes vascular resistance leading to hypertension. Such effects of the germ is also noticed in an eye ailment called trachoma which is marked by a scarring in the cornea.

In a second paper, researchers led by Joseph B Muhlestein, of the lds Hospital in Salt Lake City, usa , found that the antibiotic azithromycin helped prevent the development of atherosclerosis in C pneomoniae -infected rabbits. The thickness of the inner coat of the thoracic aorta was significantly increased in infected, untreated rabbits compared with infected, treated rabbits and uninfected controls ( Circulation, Vol 97, No 7).

However, there are some sceptics who still doubt the association. According to Irene Gavras a clinical professor of Medicine at the Boston University of Medicine, Boston, usa , linking C pneomoniae to hypertension is an interesting statistical association. But this may or may not be conclusive proof of the bacterium's role in cases of high blood pressure, she says.

While Cook's team did account for ethnic origin, Gavras noted that including British people of African and Asian decent in the analysis might have skewed the findings. C pneomoniae infection is more prevalent among these groups, for apparent reasons, but the incidence of hypertension increases only upon their moving to Western countries. And the results cannot be interpreted to say that taking antibiotics will help lower the risk of hypertension, Gavras says, adding that further research is needed.

Doctors, too, are not likely to start prescribing antibiotics to treat hypertension, at least not as yet. As Thomas Quinn, a professor of medicine at the Johns Hopkins University School of Medicine and a senior investigator at the National Institute of Allergy and Infectious Diseases in Bethesda, usa , says: "This is the first study of its kind to show this association (between C pneomoniae infection and hypertension) but sadly, it is limited in its impact as it is based on serology which is not considered a definitive measure."