One of water's many mysteries has been unravelled 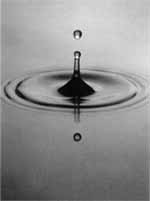 the key to all life on this planet is water. Without it, the Earth would have been just another planet, a tiny featureless speck in the Universe. Made of hydrogen and oxygen, water is another of nature's fantastic chance creations. Billions of years ago, it offered an excellent solvent and a truly comfortable environment encouraging growth of all the primitive life forms -- a process that continues to this day. However, scientists had very little idea how hydrogen and oxygen came together and then stayed united to form water ( h 2 o ) till researchers, from Lucent Technologies Bell Labs, usa , Steacle Institute for Molecular Sciences in Ottawa, Canada, and the European Synchrotron Radiation Facility( esrf ) in Grenoble, France, discovered water's enduring secret. Their experimental confirmation of a very controversial quantum mechanics prediction will have a profound impact not only on our understanding of the nature of the water, but other organic molecules like the Deoxyribose Nucleic Acid ( dna ) too.

The conventional picture of the water molecule comprises two kinds of dissimilar bonds holding the atoms of hydrogen and oxygen firmly. The hydrogen and oxygen atoms share an electron each, thus forming what is known as a covalent or a sigma bond. However, the sharing is not equal and the oxygen atoms attract the electron pair with much greater force, leaving the hydrogen nucleus with a net positive charge. It is this feature that makes water such an excellent solvent. In a molecule of water, the negatively-charged electron cloud of neighbouring oxygen atom attracts the hydrogen atoms. As a result, weak hydrogen bonds are formed where no electrons are shared.

This conventional picture was later modified by Nobel Prize winning chemist Linus Pauling in the 1930s. Using the-then newly developed quantum mechanics machinery, Pauling proved that the conventional picture was wrong. Quantum mechanics predicts that the electrons in the covalent bonds 'leak' into the hydrogen bonds. The electron clouds associated with hydrogen and sigma bonds would then overlap on one another, affecting each other's properties. However, the extent of this effect had been a bone of contention among scientists and remained experimentally untested as it involved an extremely difficult experiment.

But now, the researchers have reported an experiment, which has confirmed Pauling's ideas. The basic idea behind their experiment was to bombard water with a powerful beam of electromagnetic radiation and then analyse the radiation absorbed by the electrons in the water bonds. As far as experiments go, this one is particularly difficult as chances of hitting the electrons in the bonds are minute. Therefore, the researchers needed an extremely powerful source of radiation.

The esrf is one such source, giving out a powerful flux of x -rays. Using these, the researchers managed to get a number of hits. The intense x -ray beam is focused on to a small sample of specially prepared ice, with the detector placed near the beam source. The researchers measured the amount of x -rays being deflected back by the ice. The energy of this deflected beam allowed them to calculate the amount of energy absorbed by the electrons in the ice.