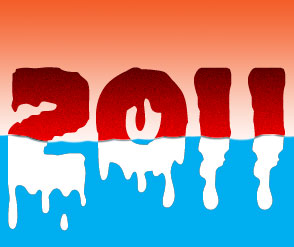 The year 2011 has been the 10th warmest year on record in spite of a strong La Nina, which has a relatively cooling influence. In the event of a La Nina, the sea surface temperature is lower than usual in the tropical Pacific Ocean. Also, in 2011, the extent of the Arctic sea ice was the second lowest on record, and its volume was the lowest, revealed a provisional statement by the World Meteorological Organization (WMO). The statement, released at the ongoing 17th Conference of Parties (CoP) at Durban, aimed at providing scientific knowledge to inform action by decision makers.

The statement presents a snapshot of weather and climate events and presents global temperature assessment as well. WMO estimated global combined sea surface and land surface air temperature for 2011 (January-October) at 0.41°C±0.11°C above the 1961-1990 annual average of 14°C. This is the 10th equal warmest year since record keeping began in 1850. Incidentally, the 13 warmest years have all occurred in the 15 years since 1997.

The 2002-2011 period equals 2001-2010 as the warmest decade on record—0.46°C above the long-term average (the period from 1961 to 1990). This warming happened despite the strongest La Nina in 60 years, which was linked to extreme events such as drought in east Africa, islands in the central equatorial Pacific and in southern part of the United States, and flooding in southern Africa, eastern Australia and southern Asia. Strong La Nina years are typically 0.1°C to 0.15°C cooler than the years preceding and following them. But, 2011’s global temperatures were considerably warmer than the most recent moderate to strong La Nina years.

But the world suffered the impact of the extreme weather in 2011 nevertheless (see 'The year of extreme weather'). Surface air temperatures were above the long-term average in 2011 over most land areas of the world. The largest departures from average were over Russia, especially in northern Russia where January-October temperatures were about 4°C above average in places.

There’s bad news from the Arctic sea region as well. The seasonal Arctic sea ice minimum was 35 per cent below the 1979-2009 average. Both the Northwest and Northeast Passages were ice-free during the 2011 summer. Sea ice volume was  further below average and was estimated at a new record low of 4,200 cubic km, surpassing the record of 4,580 cubic km set in 2010, the statement said. These coincided with the above-average temperatures in most northern polar regions.

This year will also go on record for having among the most active tornado seasons in Canada. Parts of the Mississippi river experienced the worst floods since 1933, and there was also major flooding in the Missouri river and several Canadian rivers.

An updated report with the final figures for 2011 will be published in March 2012, the World Meteorological Organization has announced.

The year of extreme weather events

Kenya: Wajir, in northeastern Kenya, received 73 mm rain between October 2010 and October 2011. This was 76 per cent below the long-term average of 310 mm, its driest 12-month period in the post-1950 period, but has received 402 mm between October 1 and November 12, already more than its annual average

Laos, Thailand: Rainfall for the June-September period was 20-80 per cent above average

Texas, USA: Statewide average rainfall for January-October 2011 was 56 per cent below normal, well below the previous record of 327mm set in 1956

The drought region had an exceptionally hot summer, with Texas’ summer (June-August) mean temperature being 3°C above the long-term average and the highest ever recorded for any American state

Brazil: The most extreme single event occurred in Brazil on January 11-12, when a flash flood, caused by rainfall which exceeded 200 mm over a few hours, in mountainous terrain about 60 km north of Rio de Janeiro, caused at least 900 deaths.

South Africa: Rainfall from July 2010 to June 2011 was more than double the average over northwestern parts of South Africa

Pakistan: The country experienced severe flooding for a second year in a row

Korea: Wettest summer for Korea, with 44 per cent above average rainfall

Hong Kong: The January-October rainfall was 40 per cent below average

Switzerland: 3.5°C above average
Alps: Parts of the Alps had their earliest spring snow melt on record

Netherlands: followed its driest spring on record with its     wettest summer