One died during forced eviction 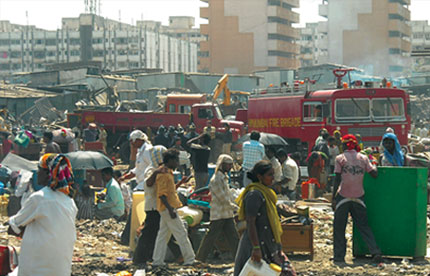 OVER 5,000 families from the eastern suburbs of Mumbai are on dharna since mid-May after 400 hutments in Annabhau Sathenagar Basti near Mankhurd were razed on orders of the additional collector.

The residents resisted the demolition. One of them, Shivaji Bhutekar, died of electrocution in the melee. Angry residents stormed the police station in the area demanding registration of negligence cases against officials. Residents from nearby slum colonies joined the protest.

Housing activists alleged the demolition was carried out at the behest of a private developer. Docu ments collected by activists under Right to Information showed the Bombay Soap Factory, which took the Sathenagar land on lease in 1977 had requested the collector to remove the slum in June last year.

“Time and again we have asked the state government to formally declare 19 slum colonies in Mumbai (including Sathenagar) as slums; but no action has been taken,” said Medha Patkar of the non-profit National Alliance of People’s Movement.

The declaration under Mahara - shtra’s slum improvement and clearance law would entitle the residents to water, sanitation and electricity. “When it comes to voting, the slum dwellers are considered legal. When we demand our right to housing, we are declared illegal and bulldozed,” said Jameela Begum, a resident.

Simpreet Singh of Ghar Bachao Ghar Banao Andolan said Sathenagar residents had sent a proposal to the state and the Centre to develop the colony under the Rajiv Awas Yojana in April, but neither government has responded. Additional collector Dhananjay Sawalkar defended the demolition saying people were given notice. He said the slum residents were illegal squatters who had settled after the 1995 cut-off date for regularization of slums.

Singh said cut-offs for slum regularization are undemocratic because the poor have a right to live and earn in a city. “The Rajiv Awas Yojana does not discriminate between declared and undeclared slums,” he added.