Orissa government to save Rs 40 crore by cancelling them 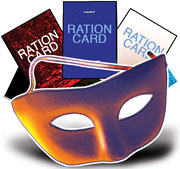 THE Orissa government has cancelled over 88,000 bogus ration cards detected during a two-and-a-half-month drive by the state’s food supplies department.

Sources said more than 68,000 of the ghost cards detected in 27 of Orissa’s 30 districts between November 2009 and January this year belonged to the Below Poverty Line (BPL) category; 9,877 such cards were under the Antyodyaya scheme aimed to benefit the extremely poor. Card holders of these two categories get the largest rations from the public distribution system (PDS) at discounted rates.

The minister of state for food supplies and consumer welfare, Sarada Prasad Nayak, said reports from three districts— Bhadrak, Boudh and Kalahandi—were not in yet. “The number could very well touch one lakh. Cancellation of these cards would mean a net annual saving of around Rs 40 crore as the state has been providing rice at Rs 2 per kg to card holders against the market price of over Rs 6 per kg,” he added. The government has decided to reduce the districts’ monthly quota of PDS ration.

The minister said the drive had become necessary because the BPL cards were issued in 1997. “We all know how it happens. Sometimes the card holders die but the ration card continues,” Nayak explained. During the drive the identity of card holders was verified; they were asked to bring proof of identity like voting cards and bank pass books along with their ration cards. In disputed cases, the card holder could address an appeal to the block development officer who forwarded it to the district collector.