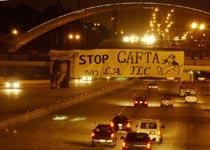 Central American Free Trade Agreement (cafta) has found a vehement opponent in Democratic presidential candidate John Kerry. Considering also the significant numbers of opponents throughout the signatory countries, it is least likely that cafta in its present form will ever become law. Although the agreement was signed on May 28 by representatives of the us and the five signatory countries -- Costa Rica, El Salvador, Guatemala, Honduras, Nicaragua -- in order for the accord to take effect in any of the Central American countries, it would first have to be ratified in the legislature of each and in the us Congress.

The Bush administration has admitted that proponents of the cafta are far short of the requisite votes needed to pass the accord. Kerry said, if elected, he would reopen talks since he did not approve of the way the accord treated labour and the environment. Robert Zoellickus, us trade representative, dubbed Kerry's stance as "economic isolationism."