A bracketed meeting in Geneva

The latest meeting to decide upon funding for the ozone protocol ended up with the developed nations foiling the basic demands of the G-77 countries, adding more disputed issues in the square brackets 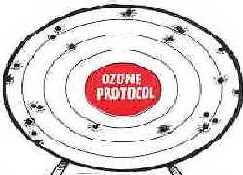 the four-day conclave of 100 countries at the Thirteenth Meeting of the Open-ended Working Group to discuss the funding for ozone protocol, ended with more disputes than agreements. The meeting, which concluded on August 29 in Geneva, saw the g -77 and Organization of Economic Cooperation and Development ( oecd ) countries in complete disagreement over the crucial issue of replenishment of funds. The g -77 countries also put up a strong protest against Russia being given a "kid-glove treatment", as a member of the Indian delegation put it, by the i mplementation c ommittee. Despite clear violations of agreements, the implementation committee has refused to charge Russia with non-compliance with the rules relating to illegal trade in ozone depleting substances ( ods ), which could invoke severe sanctions against the country.

The main agenda of the talks concerned the replenishment of the multilateral funds for 1997-1999. The meeting was to also recommend decisions on essential use exemptions, control of trade in methyl bromide, illegal trade in controlled substances, and various implementation issues. As estimated by the t echnology and e conomic a ssessment p anel ( teap ), us $436.5 million (m) will be needed for developing countries to implement the control measures agreed upon in the protocol. Another us $40-60 m will be required to continue the momentum of those developing countries that are well ahead of schedule in implementing these measures. This compares with an allocation of us $240 m for 1991-1993 and us $455 m for 1994-1996. For 1991-1995, the actual contributions totalled about us $480 m as against us $536 m that was agreed upon. Most of the arrears are owed by countries with economies in transition (Russian Federation us $47m, Ukraine us $10 m, Belarus us $2.8 m, and Poland us $2.3 m).

But the g -77 countries wanted an upward revision of the funds allocated so far, which the us and other oecd countries refused to accept. "In fact, they refused to re-look at the entire gamut of problems under the replenishment issue," S C Wadhwa, general manager, Gujarat Fluro Chemicals Ltd, one of the Indian observers at the meeting.

The g -77 countries are also worried that more and more regulated items are being added to the protocol, without there being adequate funds for phase-out of even the existing ones.

Besides, the g -77 countries found the Implementation Committee too friendly towards Russia. "The exemptions allowed to Russia are illogical," Wadhwa says. "It is claiming a 14,000 tonne essential use exemption for aerosols, despite the fact that they are receiving us $40 million from the gef for phasing out aerosol," Wadhwa complains. "It is ironic," he says, "that Russia, an Article ii country, is receiving funds, whereas it should be contributing to the funds, and still refusing to comply with the regulations." Apparently, Russia has said at the meeting that it will not be able to cut down use of ods beyond 50 per cent before 1998, and not attain zero consumption before 2000 ad .

g -77 representatives say there is evidence that Russia is illegally exporting ods to Article ii countries (developed economies), and 15,000 tonnes to Article v countries (developing nations). While the latter is not illegal, Wadhwa explained, Russia was doing it by taking advantage of a flaw in the wording of the last agreement. There is information also that some European entrepreneurs are financing the illegal manufacture and export of ods from Russia, and the European nations are aware of the problem, and have prepared a status paper on the problem.

Kenya had demanded a trade ban against Russia. But Russia says that since the i mplementation c ommittee has not charged it with non-compliance, no sanctions can be placed against them.

"If we can successfully meet the remaining challenges of controlling methyl bromide and hydrochlorofluorocarbons in industrialized countries according to agreed time-tables and of phasing out all ods in other countries, the ozone layer will start recovering soon," Madhava Sarma, executive secretary of the ozone secretariat had said before the onset of the meeting. But that has not been achieved so far.

A number of essential use exemptions for Canada, the European Union, Japan, Poland, South Africa, Switzerland and usa were to be discussed. These exemptions, mostly for health products, such as medical aerosols, add up to 13,000 tonnes for 1997 and some 11,000 for 1998.

The results of the meeting are to be reported back to the Eight Meeting of the Parties to the Montreal Protocol, which will take place from November 19-27, 1996, in San Jose, Costa Rica.