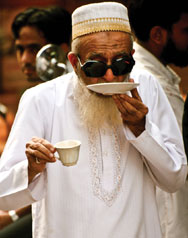 CARE for some tea? Before reaching out for that cuppa here is some information: herbal brews and some tea brands contain ingredients unlisted on the packet. The unlisted contents include weeds that could result in allergic reactions.

Teas are made from leaves of the plant Camellia sinensis, native to India and south western China. Herbal infusions, commonly referred to as teas, use roots, leaves, stems, seeds or flowers of several plants. Molecular biologists at The Rockefeller University and botanists from Tufts University in New York used a technique known as DNA barcoding to analyse 146 herbal teas and 70 regular tea samples from 14 countries. DNA barcoding quickly and accurately identifies and distinguishes plant, animal and fungal species based on a snippet of genetic code.

The researchers developed DNA barcodes (short genetic sequence) of the plants present in the samples and compared them to the reference database. They found unlisted ingredients in 21 out of 60 herbal teas and three out of 70 regular teas. The unlisted ingredients included 16 plants. For instance, an herbal tea which mentioned St. John’s wort as one of its ingredients also contained fern, Terpsichore sp., which was not listed. Another herbal product which showed ginger root and lemongrass as its ingredients was found to additionally contain annual bluegrass, a common weed. Other unlisted ingredients included parsley, white goosefoot (a relative of spinach), traces of ornamental tree Taiwanese cheesewood, alfalfa and papaya. The most common non-labelled ingredient was chamomile, says the study published in the July issue of Scientific Reports.

Lead author Mark Stoeckle says the extra ingredients could have been accidentally added during harvesting. “Or perhaps, inclusion of chamomile and parsley could have been intentional to enhance flavour or colour. They could also be used as fillers to make tea bags look fuller,” adds Stoeckle. Referring to the technology used, Stoeckle says, “After tea ingredients are dried and processed it is difficult to determine which species the ingredients came from.” DNA barcoding solves this problem. The study could help regulators tighten labelling rules for teabags and make manufacturers improve what they put in the brews, says Stoeckle.

Stoeckle team has used DNA barcoding to check the authenticity of various herbal medicines, including those used to treat menopause symptoms. Can the technology be used to test contents of ayurvedic medicines? G Ravinath, a fellow at Ashoka Trust for Research in Ecology and Environment in Benga-luru, rules out the possibility. “If herbal products are powered admixtures, then DNA barcoding would not be able to decipher the contents. The product has to be a plant part.”