A bridge across space 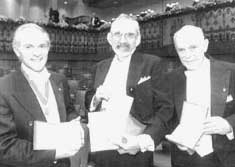 a team of scientists at North Carolina State University, US, headed by Boris Yakobson, is investigating microscopic tubes of a material related to c-60, the third form of carbon, the discovery of which won this year's Nobel Prize for Chemistry for Rick Smalley, Robert Curl and Harold Kroto.

Yakobson's computer studies of these 'nanotubes' have revealed them to be remarkably strong and resilient. They can be stretched to almost 40 per cent without damage and can support a load equivalent to 20 tonnes on a one mm thread, giving them 10-12 times the strength of steel with a fraction of its weight.

These characteristics could theoretically solve drawback to any design of space elevator: the ability of the cable to support its own weight when it stretches to a geosynchronous satellite, 36,800 km, above the Earth .

There are several designs for space elevators, but the best known involves a cable extending down to the Earth's surface in one direction with a counter-weight leading from the satellite into space in the other. In this way, the cable is kept under tension, allowing payloads to move along it.

After lengthy calculations, the idea has been refined further by proposing that a tapered cross- section for the cable, gradually increasing in diameter toward the satellite, would improve the design.

It is stated that using the elevator method would reduce the cost of launching satellites to less than US $1 per pound of weight, compared with current costs of upto US $5,000.But while elevators into space are now theoretically feasible, there are still huge problems to overcome. It has, for example, been estimated that thousands of space shuttle flights would be needed to ferry up the materials.