A bridge divides them

On december 28¤ people from 25 villages of Supaul district in north Bihar forced construction workers making a bundh on the Kosi river to abandon work. The temporary bundh will divert the river to allow the construction of a bridge.

People are agitated because the project will impede the river’s flow and cause flooding upstream where they live. The 25 villages are among the 80 odd villages trapped within the two river embankments; the villagers had refused to shift when the embankments were built in 1956. The bridge will practically dam the river and submerge areas north of it. Over 30¤000 people will be displaced. “More than 8¤000 hectares of fertile land will be lost¤” said villagers. Mahadev Paswan¤ a villager¤ said he will lose a 0.4 ha farm if the bridge is constructed. Paswan will also lose an annual income of Rs 10¤000 from fish culture.

The bridge will connect Simri village on the western bank of the river with the east bank near Bhabtahi village; it is a part of the east-west road corridor (3¤443 km) that will connect Porbandar in Gujarat with Silchar in Assam. The bridge will be 10 km-long; the river’s flow will be restricted to the middle portion measuring two km. The National Highway Authority of India (nhai) has commissioned the project.

Deo Kumar Singh¤ an advocate and an activist with the Kosi Khetriya Sangharsh Samiti¤ said the government has no plan to compensate the villagers or give them alternative land. “We are filing a petition in the court to scrap the project¤” he said. The area sub-divisional officer in Supaul¤ Neel Kamal¤ said¤ “the construction work has been stopped for the time being. We have written to the state government for directions.” He said there is no survey on the number of villages and people the project will displace.

Dinesh Misra¤ an environmentalist who has studied the Kosi river¤ questioned the feasibility of the project. The bridge is an artificial measure to guide the river and will cause a lot of damage¤ Misra said. He termed the project a death trap for the villagers. 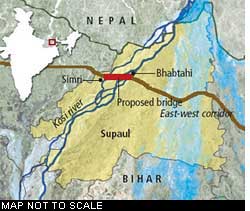 The Sangharsh Samiti members said they had met the district administration officials on January 2 to sort out the problem. The minutes of the meeting said the villagers want the bundh to be extended by 500 metres as this would prevent water from entering most villages. The villagers were emphatic that under the present plan¤ the entire population living on the river banks will be displaced. The villagers also said that if their proposal is not accepted¤ the government should rehabilitate them.

The demands of the villagers and the minutes of the meeting were forwarded to the nhai. The authority rejected the proposal on January 6 saying it is not technically feasible. “We tried to resolve the problem amicably. But now either the people will stay or the bridge. Our focus is on maintaining law and order¤” a district official said.

The state government said it has no role in the project except that of a facilitator. A senior water resources department official said the bridge will be a lifeline. “The entire Kosi region is inaccessible now. The bridge will connect these areas to the rest of the country and boost the economy¤” he said. State water resources minister Bijender Yadav said the government “will pay compensation to people who are displaced.”

But villagers are sceptical. They said hundreds of families were displaced when the Kosi embankment was built in 1956. “We will suffer the same fate as those who were displaced then. We don’t trust the government to give us compensation¤” said Ghanshyam Yadav of Simri village.