Seabuckthorn, a plant with numerous medicinal properties, grows wild in India. Rural communities are the losers 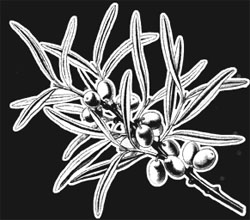 seabuckthorn (Hippophae rhamnoides) grows in the cold desert regions in Himachal Pradesh and Jammu and Kashmir. Scientists value it for its medicinal properties. The deciduous bushy-tree is another one of the plants found in India that private companies from the rest of the world trade in but which the Indian government doesn't consider valuable enough to be cultivated.

A study carried out by the department of biochemistry and food chemistry of the University of Turku, Finland and the Institute of Food Research, uk, has shown that the seabuckthorn seed oil acts as an inhibitor of platelet aggregation in blood. This reduces the risk of heart attacks and blockage of veins and arteries.

Prescribed dosage of seabuckthorn oil capsules can reduce both cholesterol and triglyceride (a harmful fat that blocks veins and arteries) formation, reducing chances of stroke. A series of clinical trials conducted on 12 patients has shown that seabuckthorn oil could be valuable for treating patients susceptible to blood clotting.
The Institute of Nuclear Medicine and Allied Sciences (inmas) based in Delhi has found that a herbal preparation from the seabuckthorn fruit , which they call rh-3, can give protection against injuries from harmful radiation. The institute has tested the preparation in clinical tests conducted on mice. Half an hour before the mice were subjected to gamma radiations, about 100 mice out of 250 were given the preparation. While all the mice not given the preparation died, 82 per cent of those given the herbal preparation survived for atleast 30 days. This was attributed to the free radical scavenging activity, increase in bone marrow cells and improved immune system brought about by the herbal preparation. The free radicals are responsible for ailments associated with exposure to harmful radiation. Bone marrow cells divide and produce new blood cells. The wound healing property of seabuckthorn seed oil has also been proved by researchers at inmas and the Himachal Pradesh Agricultural University and has been attributed to the presence of particular group of chemicals called flavonoids found in the oil.

Hiporamin, a drug prepared from the plant, acts against viruses causing herpes simplex and influenza. It also has antibacterial property according to a study carried out by the All Russian Research Institute of Medicinal and Aromatic Plants based in Moscow, Russia. The oil extracted from the fruit pulp of the plant is useful for treating atopic dermatitis, a skin disease characterized by dry, scaly and itchy skin. Though generally controlled by genetic disorders, external factors can also lead to the skin disorder. Steroids and antihistamins (anti-allergic chemicals) are used for treatment. But they have many harmful side effects. "Patients with atopic dermatitis have a disturbed fatty acid content in the skin and oral administration of the oil normalises the fatty acid composition," says Heikki Kallio, researcher at the University of Turku, Finland.

The seabuckthorn fruit is rich in vitamins such as A, B, C and K (see table: Vitamin rich fruit). According to Brahma Singh, director of the Defence Research and Development Organisation, the Field Research Laboratory (frl) based at Leh began by researching the utility of the plant as fodder and fuel wood for the local community. Over a period of time it has found better reasons to grow it -- frl uses the seabuckthorn fruits to prepare a nutritive drink which does not freeze even at -20 c ," says D P Attrey, Director of the Forest Research Laboratory.


Thorough research on the plant's qualities, quite evidently, exists. Local communities living in areas where seabuckthorn grows naturally use it mostly for fuel and fodder. Even though Indian research institutions have looked into the plant's qualities the government has failed to take the next step -- make its cultivation by local communities a viable proposition. The first consultation meeting on seabuckthorn was organised by the State Council for Science Technology and Environment at Shimla way back in 1994. The only step forward since then, if one can call it that, has been the formation of the Seabuckthorn Association of India.

While countries like China and Russia are busy profiting from exporting the plant to countries like Finland, India lags far behind. The best that the government has come up with is promises. Shailja Chandra, secretary, department of Indian system of medicine and homeopathy under the Union ministry of health and family welfare, says, "We will make all efforts to promote cultivation of the plant so that the rural community benefits."

Meanwhile a single Finland-based company, Aromatech Ltd., imports the plant to meet its demand of about 100 tonnes per year. Russia, which began cultivation of the plant in 1940s, is one of countries it sources the plant from. In the international market seabuckthorn fruit oil sells for about us$55 per litre. Veli-Markku Korteniemi, president of Aromatech Ltd., says the company is willing to buy the material from India, as their requirement cannot met by local sources. "Once the trade has been established, it will lead to long-term trade relations as the quality of the product has to be maintained by purchasing the material from the same area," he adds.

The government needs to act quickly. If it assists local communities in regions where seabuckthorn grows to cultivate the plant on a commercial scale it can help them earn money from sale and export of the produce. On the other hand, if it delays taking a decision, chances are, even the naturally growing stock of seabuckthorn may disappear under pressure from the market. As the tree takes around seven years to fruit, immediate requirements will be met from natural sources, which might endanger the existence of the tree, feels Brahma Singh. The forest department should give its land for cultivation, believes Tej Partap, director of the Asia Pacific Mountain Network, a non-governmental organisation based in Nepal. He says there is a need to increase awareness about the value of the plant among people so that they can take up its cultivation in right earnest. Its time the government got off its haunches and did what its supposed to -- help people live by sustainably harvesting their natural resources.
Health & Medicine Medicinal Plants Medicinal Plants Himachal Pradesh Jammu & Kashmir Rural Habitat Community Groups Governance Governance Nature Conservation Nature Conservation Public Participation Science & Technology Medical Research WHO Developing Countries Health Care Malaria Tuberculosis Debate Debate
SUPPORT US