A case for late pregnancies 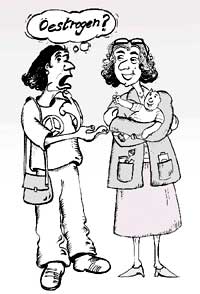 women who give birth to babies in their forties have a high chance of living a longer and less-disease prone life. A team of researchers led by Thomas T Perls at the Harvard Medical School, Boston, usa , reports that women who have babies after age 40, live longer than those who get pregnant before that age. They studied 78 females in Boston suburbs who lived to at least 100 years and compared them with 54 women born in 1896 but who had died at age 73 (Nature , Vol 389, No 6647).

The study also shows that women who extend their life span by getting pregnant later pay a price of not having a rejuvenating effect. While these women contain genes that predispose them to a longer life, they also have genes that delay the onset of menopause (the time when periods and reproductive ability come to an end).

The findings have helped the researchers understand why humans like other creatures, get ragged as they grow old and females among mammals have menopause. During the study, the team examined the 'disposable soma' theory, which suggests that in life there is a compromise between repair and rejuvenation. In other words, the gene populations undergo continuous changes with some being sidelined over a period of time, which can only be replaced with newer and perhaps better ones.

A body uses its genetic and other resources for two main purposes -- living a healthy life and procreate. It is just a matter of proportionate use of genetic and physiological resources for body maintenance and reproductive purposes.

Unlike other mammals, the anatomical arrangement of females is designed in such a way that maternal mortality is higher with the age of mother. So, remaining fertile with the possibility of conceiving at a later age may actually be dangerous for women.

Some of the women on which the study was conducted, are still alive even after age 100. While conducting the study, the researchers excluded factors such as spinsterhood, early hysterectomy that rules out birth and included the rest of the women for analysis. Even then, they found that women who had lived so long were three times more likely to have given birth to at least one child in their forties than those who lived an average life span.

According to the researchers, oestrogen -- the main female sex hormone -- largely dictates life span and the time of reaching menopause in women. Oestrogen secretion for long periods helps women remain fertile longer and keeps women healthier at later years. Perls and his colleagues say, "By avoiding or at least delaying pregnancies, diseases associated with ageing such as Alzheimer's disease, heart disease or stroke, that can cause premature mortality, women can achieve greater longevity." In fact, hormone replacement therapy with female hormones is now routinely advocated for post-menopausal women to combat old age blues.