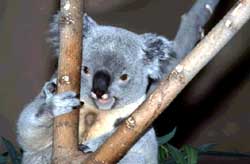 community concern for animals and clean waterways have helped to make Sydney a haven for native animals like koalas and sharks.

Koalas have made their home in a forest in suburban Sydney. Other colonies of koalas have also been found on the outskirts of this sprawling city of late. Recently, a 200 kilogramme, three-metre bull shark was caught in Rushcutters Bay, a popular area in the heart of the city.

Earlier, a bull shark was caught further down the harbour off Balmoral, one of Sydney's most exclusive suburbs.

The explosion of marine life in the harbour can be attributed to decades of community concern and government legislation to clean up waterways. With the water cleaner, smaller fish have returned and have attracted the bigger predators that feed on them.