A drink too much 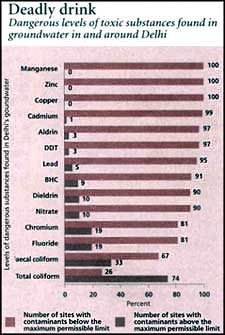 delhi's groundwater has become a cocktail of fluorides, nitrates, heavy metals and pesticides, in short -- poison. These are the finding of a groundwater survey conducted by the Central Pollution Control Board (cpcb). According to the survey, samples from 74 per cent of the sites in and around Delhi show severe contamination.

The groundwater quality survey was conducted in 250 locations in Delhi, Uttar Pradesh (up) and Haryana in 1995, applying 42 including physical, chemical and bacteriological parameters to detect heavy metals and pesticides. The water tested at these sites was polluted above the maximum permissible limits set by the Bureau of Indian Standards (bis , certified as is 10500: 1991). It contained pesticides, bacterial and viral strains, fluorine and heavy metal deposits.

A Manoharan, scientist with the cpcb , was closely involved with the survey, says: "Even after measuring on the basis of the maximum permissible limit (mpl ), which is not suitable for human consumption, we found 74 per cent of the samples were contaminated above mpl . As drinking water is pooled from all sources before being distributed in Delhi, it affects all of us."

Groundwater constitutes about 12 per cent of Delhi's total water supply (2347 million litre per day). Presence of pesticides and coliforms (bacterium belonging to the Escherichia coli group), according to the survey, is akin to slow poisoning, while heavy metals, fluorine and iron may cause widespread digestive disorders, skin diseases and dental problems. Drinking water, going by the bis norms, should not contain any bacterial and virological substances.

The survey has suggested immediate treatment and disposal of wastewater and construction of proper drainage systems. It has also suggested collection and disposal of solid waste in a way that can minimise the bleaching of toxic chemicals into groundwater. Recently, the landfills in Delhi have become the new agents of ground-water pollution. There are 12 landfills in Delhi which contribute substantially to water pollution.

Keeping the scarcity of ground-water in Delhi in mind, the report says: "In every colony and other establishments, sufficient land area is to be allowed for the rainwater to percolate, so that the groundwater potential can be increased." The report also suggests that road surfaces should not be cemented, and the soil left on it to the maximum possible extent for rain water percolation and prevention of water-clogging. The report will be published in March 1998.