A flood without rain 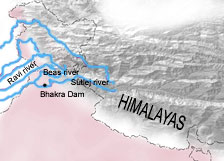 it might be the lull before a storm. This year, the Bhakra dam is gushing with more water than normal. Its inflow in July 2002 was as much as 38,000 cusecs -- almost double of last year. For some, it might be good news, considering that two-thirds of the country is suffering from drought. But in reality it is very alarming, as the excess water is a result of glaciers melting rapidly due to global warming.

The dam gets it water supply from the glacier-fed Sutlej river. The river's main tributary, Baspa, passes through a 1,100 square kilometre area with 89 glaciers. Climate experts say that the excess water in the dam is a sign that delayed monsoon and abnormally high temperatures are melting away the Himalayan glaciers rapidly. "Monsoon failure has resulted in increased glacier recession. Since there are no clouds, sunlight reaching the glaciers is much more intense. This, combined with very high temperatures, is leading to the rapid melting," says Syed Iqbal Hasnain, who heads the Glacier Research Group at Jawaharlal Nehru University, New Delhi.

A comparison of three dams in Punjab -- Ranjit Sagar on the Ravi river, Pong on the Beas river and Bhakra on the Sutlej river -- gives a clear picture of the situation. Both Ranjit Sagar and Pong, which get water from the monsoon-fed rivers, have lower water levels than last year.

Many experts opine that other dams might be facing the same problem. "Bhakra Nangal is a precedent to future disasters," says Jagdish Bahadur, an expert on glaciers and former joint advisor, department of science and technology. He asserts that "unscientific brains working in the government" are not monitoring the glaciers adequately. According to him, accelerated melting of glaciers would lead to the overflow of glacial lakes. Bursting of any of these lakes can prove to be disastrous. Moreover, the accelerated melting would adversely affect water supply in the future. This would have implications for all sectors, including energy and agriculture, asserts Bahadur.