A good way to spend money 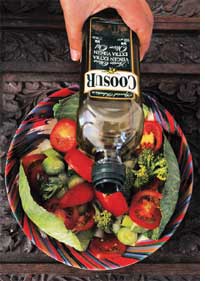 olive oil is good for health. This fact is widely known but not the reason behind it. Grown in the Mediterranean countries, its oil is said to be the reason behind the low incidence of heart attacks and strokes in these areas. Researchers have now revealed why.

Bad cholesterol, ldl, is produced in the body in response to the consumption of unhealthy cooking oils. It is also found in animal fats like lard and butter. The cholesterol circulates in the blood and slowly builds up in the arteries, hardening them. Also, excess of free radicals acting on the cholesterol, damages red blood cells (rbcs) leading to their breakdown and, in turn, clotting. These conditions increase chances of heart attack or stroke.

Olive oil has a high level of monounsaturated fats that can lower the blood cholesterol level as well as active compounds that act as antioxidants to protect rbcs from stress.

There are four kinds of antioxidants in olive oil: oleuropein, hydroxytyrosol, dhpea-ea and dhpea-eda (minor biophenols, also found in oleuropein). A research team from the Universidade do Porto, Portugal, compared the effects of all four compounds on rbcs that were subjected to oxidative stress. The compounds were effective in protecting the rbcs and dhpea-eda worked even at very low levels. In virgin olive oils, dhpea-eda makes up 55 per cent of the total antioxidant component. The findings were reported in the April 2 issue of Molecular Nutrition and Food Research.

"The study provides scientific proof of the health benefits associated with olive oil," said Ftima Paiva-Martins, lead researcher, University of Porto. Antioxidant drinks made from olive leaves are available in some countries.

Other oils--sesame, rapeseed, groundnut and mustard--are also rich in monounsaturated fats and antioxidants. But the benefits are removed when the oils are processed. The healthiness of virgin olive oil lies in the fact that it is not processed.